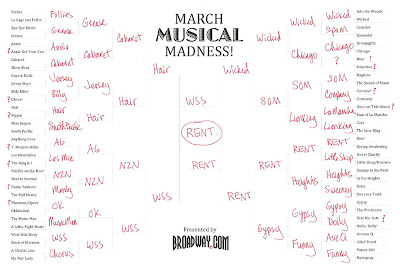 Apparently there's some sort of sports tournament this month that's making everyone want to rank things in the form of brackets. I don't really get it, but when I saw this floating around the internet, I couldn't resist. 64 musicals are entered into this bracket, with many many one-on-one comparisons resulting in one musical theater winner. (Click on the bracket above to enlarge it.)

My method for filling this out was not to pick the "better" or "best" musical, because who am I to judge that? And with such diversity, from Oklahoma! to Book of Mormon, many comparisons are like apples to oranges. Instead, I chose the musicals that I enjoy the most, or that have meant the most to me, or that I see as important in musical theater history. I'm sure there are as many different results as there are people who fill this out. If this looks like fun to you, you can get a blank bracket here and fill it out yourself.

A few notes on some of the comparisons:

I could go on and on, but it's Survivor night, so I'll leave it at that. Please comment below if you agree or disagree about a particular match-up!

2014 Update:
Of the 12 musicals I hadn't seen last year, I have seen one of them since - Phantom of the Opera. And I would still rank Oklahoma above it. Although after seeing a magical production of The Music Man by Ten Thousand Things recently, I would rank it above Oklahoma.

2015 Update:
Of the 11 musicals I hadn't seen last year, I have seen two of them since - Oliver! and Pippin. (And I plan to see two more this year - Damn Yankees at the Ordway and Carousel at Bloomington Civic Theatre.) As much as I loved Pippin, no way I'm ranking it above Hair. Oliver! vs. Billy Elliot is a bit tougher, I might have to say Oliver! because of the many familiar songs. In fact I may have to rethink that whole section in light of BCT's delightful production of Guys and Dolls last year. This bracket might look a little different if I filled it out today.

2016 Update:
Here it is, March again, and my CBS soaps are preempted. Must mean it's time to update this bracket. As I mentioned last year, I have checked off two more of those original unknown twelve, Damn Yankees and Carousel. And even though I enjoyed them both, I've still got to give it to The Full Monty (so fun!) and Company (probably my favorite Sondheim). The bracket is still available (although I wish they'd update it with new entries - hello Hamilton!) if you want to play along!