"Hamilton" at the Richard Rodgers Theatre on Broadway 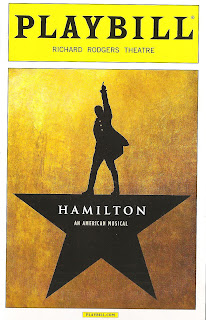 "Look around, look around, how lucky we are to be alive right now!" Fans of the American musical are very lucky to be alive right now. Lin-Manuel Miranda is the future of music-theater, and the future is now. Hamilton is a quintessentially American piece of art: musical theater is an American art form, Alexander Hamilton's story, from orphan immigrant to founding father, is a quintessentially American story, the score is a modern American rap/hip-hop/pop/musical theater style, and the cast is a beautifully diverse representation of this country. Lin-Manuel has taken this part of American history that most of us have forgotten and created something so immediate, compelling, epic, human, and utterly modern. In short, Hamilton is everything musical theater should be.

It's rare that one person writes the book, music, and lyrics of a musical; most are written by pairs or teams of artists. It's even more rare that that person also stars in their creation. Who does that?! Lin-Manuel Miranda, that's who. Hamilton is his singular, cohesive, brilliant creation. And even though his excellent understudy Javier Muñoz filled in for him in the title role in the matinee on a two-show day that I saw, I still feel like I saw Lin-Manuel Miranda because this show is him. That's not to say he didn't have help - director Thomas Kail to keep the huge train that is the show on track, Andy Blankenbeuhler's sharp and modern and super cool choreography, Paul Tazewell's stunning period costumes with a modern twist, David Korins' design of a relatively simple but versatile and kinetic set, and of course, this amazing cast that brings Lin-Manuel's vision to vivid life.

I love theater that makes me want to rush home and read more about the topic, and this show makes founding father Alexander Hamilton seem like the most fascinating person I never knew (history class was a looooong time ago). From George Washington's right-hand man during the Revolution, to Secretary of the Treasury, to author of the Federalist Papers, to a family man caught in a love triangle with two sisters, to the center of America's first political sex scandal, to death in a dramatic duel. But even thought this is a historical piece, the themes of politics, family, legacy, and striving to make this country better against opposition are extremely relevant to every time period, especially today.

The Hamilton cast recording was released recently and I was torn about whether to get it and listen to it, or wait and see the show first. I chose the latter, and now I cannot wait to download the album and listen to it obsessively. There are just so many words, and no matter how closely you pay attention (and you have to pay attention), you cannot catch them all on first viewing/listening. In fact, my stats friends at 538.com counted - Hamilton contains 3-4 times as many words as other musicals. That's insane. And brilliant. But it's not just the words, there are some great melodies too, that haven't left my head yet and likely won't for a long time.

As I mentioned, I did not have the pleasure of seeing Lin-Manuel in the title role, but Javier Muñoz soon made me forget I was watching an understudy as he completely made this complex, layered role his own and seamlessly fit in with the huge and amazing cast. Highlights include Phillipa Soo as Alexander's wife Eliza; Renee Elise Goldsberry as her sister Angelica, Alexander's close confidante (the best love triangles are those in which there is love in all directions, as there is here, creating some achingly beautiful moments for all three); Leslie Odom, Jr. as rival Aaron Burr, who functioned as a sort of narrator; Daveed Diggs as a cool and funky Jefferson; and last but not least, Andrew Rannells, who is an absolute hoot as King George, the spurned lover of America who has rejected him (if you have to replace Jonathan Groff, Andrew Rannells is the only way to go).

In summary, everything you've heard about Hamilton is true. It lives up to the hype, and so much more. I was expecting to laugh and be wowed, but I was not expecting to be moved to tears. This is a show that's both big and epic, and also intensely intimate and emotional. It'll make you laugh, think, cry, and feel every emotion under the sun. This is what musical theater can do, and this is a prime example of why musical theater is my favorite thing in the world. Thank you Lin-Manuel Miranda.

(Note: The only way to get tickets is to buy them well in advance from the show's website. This is one of those shows that is never going to have discounts available. So just do it, it's worth every penny.)