"My Children! My Africa!" at Park Square Theatre 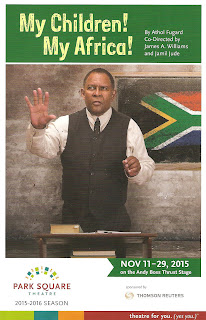 As My Children! My Africa! begins to unfold on Park Square Theatre's Andy Boss Thrust Stage, there's a chance this might be a feel-good story about two young people of different race and socioeconomic status becoming friends and bonding over the love of learning. But this is 1985 South Africa at the height of Apartheid. That's not how this story goes. What unfolds instead is a tragic story oppression, rebellion, missed opportunities, lost life, and perseverance through it all. It's a powerful and heavy story, but heart-breakingly beautiful as delivered by this strong three-person cast under the co-direction of Jamil Jude and James A. Williams.

In a township in South Africa, we meet Mr. M, who has all of the wonderful qualities of the dedicated, inspiring, self-sacrificing teacher that we see in movies, TV shows, and plays. Teaching black students in a neighborhood on the edge of town known as "The Location," he tries to inspire and educate despite the limitations placed on him by the government. He invites white students into the school to participate in a debate, and two particular students, Thami and Isabel, work together so well that he asks them to be a team for a contest in English literature. The two bond over their love of learning as they engage in some friendly competition. But it soon becomes apparent that a young black man in the age of Apartheid does not have the luxury of spending all his time studying English literature, nor is it particularly relevant to his daily life. A school boycott is proposed and Thami eagerly joins it, dropping out of the competition, confusing and devastating Isabel while angering Mr. M. After the tragic results of the boycott, the two students go their separate ways, but both carry Mr. M's spirit with them as they vow to make their lives count. Mr. M's dedication provides a bit of hope in the darkness.

As Mr. M, Warren C. Bowles is wonderful portraying this man who has dedicated his life to his students, and who truly believes that education can save lives. Cage Sebastian Pierre and Devon Cox are two talented young actors just beginning to make their mark on the local theater scene, and they do so in a big way here. They bring much enthusiasm to the roles of Thami and Isabel, that gradually fades as their idyllic school life fades, and they are forced to face the harsh realities of the world they live in. The three actors all have long monologues that not only convey information, but also the emotion of the characters, all done in unwavering and specific South African accents.

Although the specifics of the racial tensions in South Africa 30 years ago and our own time and place may be different, it's easy to see the parallels. Whether fighting the oppressor with violence, or trying to improve things from within the system, these characters hold tight to their beliefs and persevere in their fight, desperately clinging to what's good and right in the world. Seeing My Children! My Africa! on it's final weekend may leave you feeling as heavy as Thanksgiving dinner does, but this important and thought-provoking work is worth it.