"Spring Awakening" at the Brooks Atkinson Theatre on Broadway 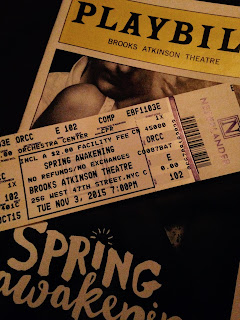 Hey Minnesota friends, I'm in New York City! To celebrate my 15th year of annual visits to my favorite city in the world and my 15th year of running, I ran the NYC marathon (raising $4500 for the MS Society in the process). Now that those amazing, excruciating, inspiring 26.2 miles are done, it's time to see some Broadway shows! Last night I received my first ever press comps for Broadway (after 5 years of this blogging thing, does that mean I've finally made it?). And I could not have chosen a better show for this milestone than the absolutely exquisite revival of one of my favorite musicals, Spring Awakening. But this new production by Deaf West Theatre in L.A. is less of a revival and more of a re-imagining of the 2006 original Broadway hit (to borrow a phrase from our own Theatre Latte Da, who did a pretty amazing re-imagining of this show a few years ago). Director Michael Arden and his team (including ASL Masters who translated the songs and dialogue into ASL) have created something truly unique and original with this Spring Awakening, which not only examines the sexual awakening of teenagers in late 19th Century Germany (which perhaps isn't all that different from today), but also the treatment of deaf children in the same time period, when, according to the Director's note, sign language was banned in schools. This has brought more layers and a new urgency to this already powerful, poignant, devastating, moving, and beautiful story. In short, if you're planning to be in NYC sometime before January 24, go see this show. Even if you've seen Spring Awakening before, you've never seen it like this.

I'm not going to go into the brilliance of this Steven Sater/Duncan Sheik-penned musical based on the 19th Century German play by Frank Wedekind, and how they took this ahead-of-its-time play and made it modern and relevant. I've written enough words about that here and here. Instead I'll focus on the brilliance and uniqueness of this particular interpretation.

Whenever I happen to be at a theater performance with ASL interpretation, I have a hard time taking my eyes off the interpreters because they're so expressive. With this production, I didn't have to. ASL has been incorporated into the show not as an addendum, but as an integral part of the storytelling. Even if you don't understand a single sign, the sign language adds so much depth to the words and music. Musicals express a heightened reality, where things that cannot be expressed in words are expressed through music. Here, things that cannot be expressed through words or even music are expressed through sign language, which may be the most beautiful and expressive language in the world. It's like a dance, and for a show that featured repeated hand movements and choreography in its original form, ASL is a perfect fit. Many of the roles (including Wendla and Moritz) are double-cast with one actor playing the character and signing, and another actor speaking and singing in the background, not just providing the audible voice of the character but also the inner voice. It's like the two actors are playing two parts of the same person, often interacting with each other like we all interact with that inner voice in our heads. At some point I lost track of who was singing and who was signing as it all joined together to create one singular voice.

The original Broadway production of Spring Awakening featured a cast of talented young unknown actors who have gone on to become stars on stage and screen, including Lea Michelle, Jonathan Groff, and John Gallagher Jr. Similarly, this cast is full of talented young people, most of whom are making their Broadway debuts, some of whom also play instruments, and many of whom are destined to become our next generation of stars. I'm curious what's going to happen when the Tony nominations come out, if two actors will be nominated together for the shared roles, because it's impossible to separate their performances. Sandra Mae Frank is so wonderfully appealing as the sweet, innocent, and curious Wendla, and Katie Boeck provides a lovely voice for her. Daniel N. Durrant beautifully portrays the confused and tormented Moritz, signing in a speaking world adding to the characters frustration. Alex Boniello provides his voice and inner rocker. As Melchior, Austin P. McKenzie is a special kind of triple threat - acting, singing, and signing combining to create this character who thinks he has it all figured out but has much to learn.

The entire ensemble of young people is wonderful, singing, signing, acting, playing guitar or piano or bass (in addition to the four band members). The four adult actors are great too, including Camryn Manheim (from one of my favorite TV shows of the past, The Practice) in what appears to be her stage debut, and Alexandria Wailes (filling in for Marlee Matlin at the performance I saw). Another remarkable thing about this show is that it features the first actor in a wheelchair on Broadway, which I find astounding (Broadway could learn could learn a thing or two from Mixed Blood Theatre). Ali Stroker (whom I recognized from another favorite TV show of the recent past, Glee) is a delight and adds another layer of inclusiveness and representation to this production.

The show is cleverly put together in terms of how ASL and spoken or sung English are combined, and when and where surtitles are used. In one particularly effective scene between Moritz and his father, there is audible silence as the elder Herr Stiefel berates his son for being a "failure" in angry ASL and we read the painful words projected onto the back wall of the stage. The rare moments in which a deaf person screams or speaks are particularly heart-wrenching because it only happens when they feel like they cannot be heard any other way ("why didn't you tell me everything?!"). The multi-level set provides a great playground for this energetic and physical cast, and the simple period costumes contrast nicely with the more modern garb on the inner voices (scenic and costume design by Dane Laffrey).

Spring Awakening is a beautiful, inventive, and inclusive production of a brilliantly written musical, and a wonderful start to my week of Broadway. Get your tickets now (or check out the TKTS line in NYC). Next up for me: a pretty rotten two-show day seeing Hamilton and Something Rotten!