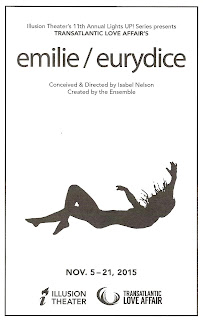 I love Transatlantic Love Affair, the Fringe Festival darlings who often work with Illusion Theater to continue to develop a piece after the Fringe. What they do is so unique and special, telling a story with no set or props, using their bodies and voices to create everything in a very specific world. The result is often achingly beautiful. Their new piece, emilie/eurydice, did not appear in the Fringe (maybe because they didn't get in last year) and is instead premiering at the Illusion. This original story of a woman in a coma and those who love her is another example of the beautiful storytelling that TLA does.

emilie/eurydice was conceived and directed by TLA Co-Artistic Director Isabel Nelson and created by the seven-person ensemble. Emilie and Olivia are a normal happy couple living in NYC, until Emilie is in a car accident that puts her in a coma. Olivia and Emilie's father David stand watch at her bedside, hoping every day that she'll wake up, but the days pass with no change (a heartbreaking situation that reminded of this song). The piece explores how David and Olivia's lives and routines change after Emilie's accident, their relationship as the two people who love Emilie the most, and also Emilie's experience in a coma, as she drifts into a dreamlike space (or to the Underworld and back, as in Eurydice's story). It's devastating and poignant and hopeful.

Most of TLA's shows have been set in the past, or outside of time in a sort of fairy tale space. But this piece is firmly rooted in the modern present, with the instantly recognizable New York subway and noisy and rhythmic medical technology that surrounds Emilie in her hospital room. Emilie, Olivia, and David seem very real, as does the situation and the people they interact with. Also very modern is the treatment of Emilie and Olivia as just another loving, supportive couple, that just happens to consist of two women. I expected their relationship to create some sort of conflict with Emilie's father, or with the hospital staff, but it refreshingly never does. Instead the focus is entirely on the trauma and its aftereffects.

This beautifully expressive seven-person cast includes many familiar faces and a few new ones to TLA. As the title character, Heather Bunch is sympathetic and relatable and heartbreaking, proving that she doesn't need any physical tricks or oddball character transformations (which she's so good at) to create a specific and full character. TLA newcomer Joy Dolo brings much heart and humanity to the role of Olivia, and the two are a believable couple. Eric Marinus completes the trio well as David. The rest of the ensemble (Alex Hathaway, Derek Lee Miller, Natalie Remus, and Allison Witham) play the doctors, nurses, and other characters animate and inanimate. As always, music helps to create the world of the play, in this case Emily Dantuma on the mournful and evocative cello, which also factors into the plot as Olivia is a cello player and uses it to communicate with Emilie through the coma.

If you've never seen Transatlantic Love Affair, you should go see this show to witness their uniquely innovative and physical style of storytelling. And if you're already a fan, you won't want to miss this latest piece in their repertoire that paints a modern and beautiful portrait of relationships that endure through physical and emotional trauma (playing at Illusion Theater through  November 21, with discount tickets available on Goldstar).