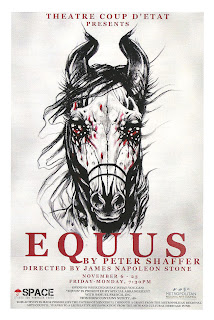 A 17-year-old boy blinds six horses. This true event inspired English playwright Peter Shaffer to write the 1973 play Equus, creating characters and a story to explain how and why this might have happened. The result is a fascinating exploration of religion, idolatry, growing up, the child-parent relationship, and the role of therapy. I had never seen the play before (in fact all I knew about it is that it's the play in which Daniel Radcliffe was naked on Broadway), so I went to see Theatre Coup D'Etat's production with no expectations or prejudgments. I found the play to be thought-provoking, disturbing, and engrossing, as seen through this excellent production with a strong cast anchored by two terrific performances.

The story is told by Dr. Dysart, whose colleague asks him to work with the disturbed boy after the bloody and violent act of blinding six horses. At first Alan only speaks in commercial jingles, but the doctor eventually builds a trust and rapport with him, through which his life story comes out. He had a fairly normal childhood, with strict parents, until a childhood encounter with a horse grew into the worship of a horse spirit or god he calls Equus. Why, then, would he maim these creatures he reveres? Perhaps to break free of their spell? The doctor uses various methods including a tape recorder, hypnosis, and a placebo "truth pill," until the full story is eventually reenacted for the doctor and the audience.

But Equus isn't just about the boy, it's also about the doctor and his dissatisfaction with his practice and his life, to the point that he's almost envious of the boy for his reverent experiences with his god. Who's to say that the idea of a horse god is any more ridiculous than the ideas espoused by any other religion? Is someone who thinks a horse speaks to him any less sane than someone who thinks Jesus speaks to him? Obviously if this religion causes him to hurt another creature it's going too far (although it's not the first time violence has been done in the name of religion), so something must be done. But in curing the boy of his fixation on horses, did the doctor also rob him of his only passion in life? Will he miss the mountains? This is a play without easy conclusions but one with plenty of food for thought.

The entire cast is strong, and interestingly never leaves the theater space. Though not onstage, they're always present, witnessing the events as they unfold. But the play really hinges on the two characters of the doctor and the boy, and both Charles Numrich and Kevin Fanshaw give excellent performances. The former is very natural as the world-weary yet still curious doctor; he makes you want to tell him all your troubles one minute and sympathize with his own troubles the next. Kevin is extremely compelling as Alan in all his incarnations - a sensitive and lost little boy, a sulky teenager, a man in love and enraged. Notable in the ensemble is Jeff Groff as the object of Alan's reverence, the horse. With his clip-clopping wedge heels like hooves always moving, and an elegant wire frame horse head (less is more in terms of puppetry), he gives his horse characters intelligence and soul.

I had never been to Savage Umbrella's SPACE, an artist studio space off University in St. Paul near the old Gremlin Theater space (which sadly still has the sign up). Director James Napoleon Stone and set designer Meagan Kedrowski (who also appears in the play as the nurse) make good use of the square space. The square stage is set up in one corner, outfitted with simple wooden planks reminiscent of a stable but with the versatility that allows for office, home, and bedroom scenes. The audience is seated on two adjacent sides of the stage, with the cast seated in between and occasionally walking through the audience to make their entrance from various parts of the stage.

I'm catching this one near the end of its run (still playing catch-up from my week in NYC), but you still have four opportunities to see Equus this weekend. At a ticket price of just $13 (or Goldstar discount tickets for a mere $6.50), you don't want to miss this excellent production of a strange and thought-provoking piece of theater.