"Something Rotten!" at the St. James Theatre on Broadway 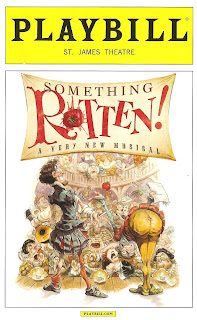 My third Broadway show this week (and second Broadway press comps ever) was the super fun musical spoof Something Rotten! What I'm loving about my week of NYC theater is how different all the shows I've seen are. From the intimate and exquisite new production of Spring Awakening, to the hugely ambitious and layered Hamilton, to the silly and entertaining Something Rotten! What this loving spoof of the musical lacks in depth it more than makes up for in fantastic performances, clever and groan-worthy puns, and musical theater references galore. It's definitely a musical for people who love musicals, but aren't afraid to laugh at the concept.

Something Rotten! is a broad campy comedy about the making of a musical, similar in feel to The Producers and Spamalot. The musical-within-a-musical concept allows the creators to satirize the form while still remaining true to it. Our story takes place in the late 16th Century ("Welcome to the Renaissance"), the blossoming of art and culture, as well as toilets that flush (into the street). Playwright Nick Bottom needs a hit, but Shakespeare is hogging all the glory. So Nick pays a soothsayer to tell him what the next big thing is theater is going to be, and this Nostradamus sees Shakespeare's greatest work Hamlet, as well as the birth of musical theater. Except that he gets things a bit jumbled (fortelling the future isn't an exact science), so what Nick ends up writing, with the help of his sweet lovesick poet brother Nigel, is a mash-up of Hamlet and popular musicals from Annie to Phantom. Which is great fun for the Something Rotten! audience, but not so much for the Omelette: The Musical audience and investors. Or Shakespeare, who dons a disguise (like many of his characters) to sabotage the play. But as the Bard says, all's well that ends well, and in this case that means the Bottoms head to America, where musical theater is truly born.

Like my first two shows this week, this performance featured an understudy filling in for a big name role. I was looking forward to seeing Brian D'Arcy James again after his wonderful appearance at the Guthrie's 50th Anniversary Gala a few years ago. Unfortunately Brian had the night off. But Matt Wall soon won me over with his talent and charm, and if I hadn't know he was an understudy, I never would have guessed. The other big name in this show is Tony winner Christian Borle, and it was a treat to finally see him perform live. He is effortlessly cool and charismatic, and plays Shakespeare like a British rocker, in love with himself and the attention he gets, even if it is "Hard to Be the Bard." Other highlights in the cast include John Cariani as the adorkable Nigel, Kate Reinders as his sweet and equally nerdy love interest, and the powerful-voiced Heidi Blickenstaff as Nick's loyal and feminist wife.

Since this is a spoof of musicals, they can get away with big dance numbers that have nothing to do with anything other than showing off the talent of the ensemble and director/choreographer Casey Nicholaw's big and beautiful Broadway style choreography (the tap duel between Shakespeare and Nick is a highlight). Scott Pask's elaborate scenic design features many moving parts as colorful buildings and structures move smoothly on and off stage. Gregg Barnes' bright and colorful costumes make the 16th Century look like a fun time to be alive!

Something Rotten! is a really fun show, and if you love musicals you'll have a good time catching all of the references in the dialogue, music, and movement. It may be overshadowed by some other popular shows in town right now, but it's still an excellent choice if you're looking for something to see in NYC, and tickets will be easier and cheaper to come by. Check for discount tickets at a number of websites, or the TKTS booth in various locations.