"Christmas in the Airwaves" at Lyric Arts 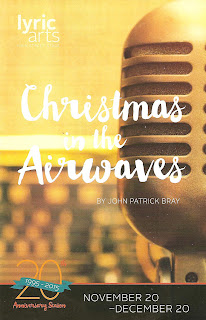 If today's snowstorm doesn't get you in the holiday spirit, Lyric Arts in charming downtown Anoka will! This year they commissioned a new holiday play, Christmas in the Airwaves, which premiered the week before Thanksgiving, and this weekend they open their "Mainly for Kids" (and grown-ups who can't get over their childhood obsession with all things Little House) production of A Laura Ingalls Wilder Christmas. I'll be visiting my friend Laura on Saturday, but first, let's return to the 1940s. A time when men went off to war, women stayed behind to run things (and sing harmony), and radio was king. It's in this idealized world of the '40s that our story takes place. It's Christmas 1944 in a small snowy Minnesota town, as we watch a live radio broadcast, along with the behind-the-scenes lives of the cast and crew of the show. This simple, sweet, charming story with lovely holiday and wartime music is as comforting as hot apple cider on a cold and snowy day.

There are a lot of players in this story; it took me a few minutes to get everyone straight. Basically we've got three sisters (Muriel, Alice, and Gloria) who sing harmony a la The Andrews Sisters at a local radio station, the writer/actor Buck (Muriel's beau), the sound effects man Hubert, local-boy-turned-NYC-star Max, the radio show staff, and the band. Gloria's fiance is fighting oversees, Alice is crushing on Max, and Muriel is busy worrying about both of them. They're preparing for a live Christmas show that will be broadcast throughout the state, and if it goes well, the New York station just might let them do more, keeping the station in business. Once all of that has been established, we go to the show within a show, which is a little like watching A Prairie Home Companion with alternating skits and music (both holiday standards and lesser known wartime songs from the '40s). After the show is completed, with just a few surprises, the happy ending is wrapped up and we go off into the night singing "We Wish You a Merry Christmas."

I love it when the band is not only onstage, but a part of the show as they are here (although as one of the characters comments, they never talk!), and they have a great '40s sound under the direction of Andrew Walker. Director Craig Johnson keeps all the pieces together and moving along, including the appealing young cast. As the singing sisters, Stephanie Wipf, Missy Hildebrandt, and Sarah Frazier make a lovely trio, with some delicious harmonies. Jordan Oxborough looks and sounds every bit the crooner as Max, Brendan Veerman's Buck provides the comedy, Dann Peterson is a natural and comforting presence as the station manager, and Michael Conroy as the mostly silent sound effects man almost steals the show with his antics and a surprisingly beautiful French rendition of "O Holy Night." The entire cast has fun doing radio voices for the amusing skits.

The Lyric Arts stage has been effectively turned into a 1940s radio station, with sound and announcer booths (and some fun had with the sound proof feature of the booths), vintage microphones, sound effects station, and the band at the back of the stage (I'm curious to see how this set becomes a frontier town in the late 19th Century). The sharp period costumes complete the look, and kudos to whoever did the sisters' elaborate '40s updos (scenic design by Jane Ryan, costume design by Stephanie Mueller).

Christmas in the Airwaves continues through December 20.