"The Cocoanuts" at the Guthrie Theater 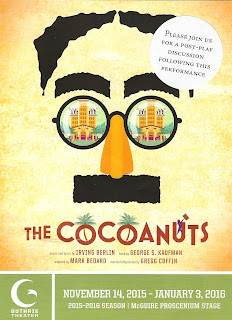 Not being familiar with the Marx Brothers, I didn't know what to expect from The Cocoanuts. In fact, when the Guthrie announced their season this spring, I didn't even know what it was (It's a musical? But I've never heard of it!). Turns out it's a little before my time. The 1925 Broadway musical was written for the Marx Brothers by George S. Kaufman, with music and lyrics by one of the best American songwriters, Irving Berlin. The musical was adapted into one of the first "talkies" in 1929, but has never been revived on Broadway, so I guess I can be forgiven for having never heard of it. Last year the Oregon Shakespeare Festival premiered a new adaptation of this 90-year-old musical (what the Marx Brothers have to do with Shakespeare, I don't know), and that's the production that opened at the Guthrie last weekend. The Guthrie's production features the same actors playing the three most famous Marx Brothers (but with our fabulous local actors taking over most of the rest of the roles), much of the same creative team, and a book that's been slightly tweaked to add in some Minnesota references. The result is a delightfully and ridiculously fun show that pulls out all the comedic stops to entertain the audience, the cast, and even the ushers. A good time was most definitely had by all.

The plot of The Cocoanuts is fairly thin, but the important thing is it provides a structure around which all the hijinks occur. In a struggling hotel in Cocoanut Beach, FL, owner Mr. Hammer (the most famous Marx Brother, Groucho) needs money to keep the doors open, whether by romancing a rich older woman or selling off lots in the property next door. Overworked bellhop Mr. Jamison (the youngest brother Zeppo) just wants to marry his sweetheart Polly (daughter of said rich older woman) and settle into a little cottage on Lot 26. But he's framed for stealing a diamond necklace by a couple of con artists, one of whom also wants to marry Polly - for her fortune. The other two Marx Brothers Harpo and Chico show up to cause havoc along the way to the happy ending.

But back to those hijinks, which are the best part of the show, along with Irving Berlin's funny, clever, rhythmic, melodic songs, the most famous of which is "(I'll be Loving You) Always" (and all of which sound great performed by the onstage five-piece band). Mark Bedard adapted the show and plays Groucho, and his comfort and playfulness within the role speak to his time spent on and commitment to the project. He is the ringleader of this crazy circus, torturing his costars when they start to break (which is certainly not discouraged), chastising the audience for being to slow to catch one of the countless puns (I admit I missed at least a quarter of them), savoring every comedic moment. The rest of the cast take their cues from him, especially Brent Hinkley as the silent honking Harpo and John Tufts as the accented Chico. Never having seen the real Marx Brothers, the interplay between these three as they perform their comedic dance makes me understand their popularity and success.

Every last member of this 12-person cast plays their role perfectly, whether over-the-top camp or straight man. We have the sweetly singing Greek Chorus trio comprised of Jessica Fredrickson, Katie Hahn, and Wesley Mouri; the sweet and sincere lovebirds Justin Keyes and Cat Brindisi; conniving and wisecracking con artists Ann Michels and Paul De Cordova; hapless detective Trent Armand Kendall; and last but not least, the scrumptious Peggy O'Connell with a face made for this sort of campy comedy, the perfect foil for Mark Bedard's Groucho. Watching this cast play with each other and try to make each other laugh can't help but make the audience laugh right along with them. And if you happen to get a seat in the front row of cabaret tables, watch yourself and your belongings as the actors frequently spill off the stage and mingle with the audience. It's great fun to watch.

The design of the show has been mostly transplanted from the OSF production - why mess with perfection? Richard L. Hay's cartoony two-dimensional sets provide the perfect backdrop for this sunny comedy, and include a particularly clever double-room design that allows for some sublimely comedic comings and goings with plenty of well choreographed door slamming. The dance choreography (by Jaclyn Miller) is great too, with characters sometimes breaking into dance while conversing with each other. The costumes (designed by Meg Neville) are delectable - lovely period dresses with matching accessories for the women, smart suits for the men, and the Marx Brothers' crazy costumes with plenty of pockets for appearing and disappearing items.

The world is an increasingly terrifying place, locally, nationally, and internationally. In such times it's a necessary relief to have a place to go where you can forget all that for a few hours, and celebrate humor, music, art, and community. This delicious mix of the Marx Brothers' punny slapstick comedy and Berlin's lovely and clever songs might be just the antidote you need. The Cocoanuts continues through January 3 on the Proscenium Stage. Across the lobby on the Thrust stage is, of course, A Christmas Carol, another nice balm to the soul (while I haven't seen it this year, it's virtually the same show as last year).