"The Night Alive" at the Jungle Theater 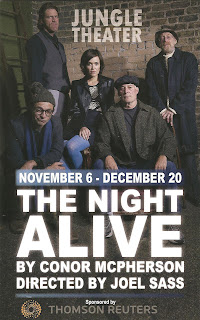 The Night Alive is an odd little play. Which is really no surprise - it's Irish. No offense meant, I love all things Irish, including odd little Irish plays. I'm not quite sure what to make of Irish playwright Conor McPherson's newest work The Night Alive, now playing at the Jungle Theater, other that it's funny, tragic, and wholly engaging. This tale of a bunch of misfits in a run-down house in Dublin is brought to gritty life by an endlessly watchable five-person cast speaking with lovely Irish brogues (some more authentic than others) and the Jungle's usual perfection in design. I may have left the theater a little perplexed, but definitely with something to chew on.

Our story is centered around Tommy (a natural and lived-in performance by the always excellent Stephen Yoakam - now with hair!), a divorced father of two working odd jobs and living in a shabby, messy room in his uncle's house. Uncle Maurice (Martin Ruben, a charming grumpy old man) is still grief-stricken by his wife's death three years ago, and not happy with the way Tommy is living his life. Tommy's business partner and sometime flatmate Doc (a loveable drifter in the hands of Patrick Bailey) shows up every now and then to share a cup of tea or some chips and do a job or two. There's a certain easy regularity to their lives, which is disturbed when Tommy rescues a woman who is being beaten up on the street. He gives Aimee (Sara Richardson, all raw emotion and nervous tics) a place to sleep and a bit of security, until her abusive boyfriend (a truly terrifying Tyson Forbes) finds her. Tommy and Aimee are forced to take desperate measures, and then... well, something happens. Or doesn't happen, I'm not sure. But it's a lovely and bittersweet moment.

Joel Sass directs the play and has designed the very real looking set. The curtain is up when you enter the theater, allowing extra time to take in this once grand and now dingy room - dirty sink and makeshift kitchen, cots strewn with blankets, garbage bags and clothes thrown about, and let's not even speak of what might be in that toilet in the corner. It's the kind of room where you don't want to touch anything or sit down for fear of what you might find. Barry Browning's lighting casts a dismal glow on everything. It's a scene that outwardly reflects the state of Tommy's life.

If you like your theater odd, dark, full of interesting characters, and with that distinctly Irish mix of hope and tragedy, The Night Alive might be just the show for you (playing through December 20).