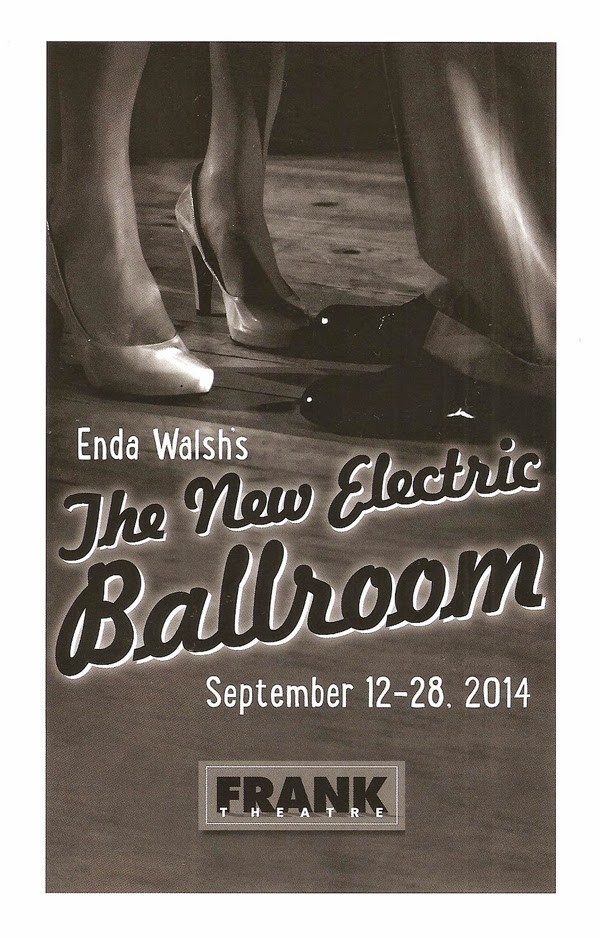 Enda Walsh seems to be a perfect match for Frank Theatre. Their mission is "to produce unique work that stretches the skill of the artists who create the work while simultaneously challenging the everyday perceptions of the audience." In other words, they do weird stuff, but weird in the best possible way, in the way that challenges the audience and encourages us to look at things in a new way, even if we don't quite understand it. Irish playwright Enda Walsh also writes weird and interesting and challenging and utterly unique plays. Hennepin Theatre Trust is marketing The New Electric Ballroom as "from the author of Once." Please don't go to this expecting to see Once; The New Electric Ballroom is most definitely not Once. Enda Walsh did not create the world or the characters in Once, he adapted a film, putting his gritty Irish stamp on it. But the worlds he creates himself are much more dark and twisted and complex. As with last year's Ivey award-winning Misterman, Frank once again does beautiful work with this weird, challenging, disturbing, completely engrossing, crazy brilliant play.

Much like in Misterman, The New Electric Ballroom features characters that are trapped in the past. More specifically, in one pivotal day in the past. Sisters Clara and Breda, in their 60s, reenact a traumatic experience they had when they were teenagers, relating all of this to their younger sister Ada, who encourages them to keep telling the story even when it's almost too painful to continue. They put on make-up and the clothes they were wearing that day as they go through the story for what seems like the thousandth time, a story that involves a long bike ride, a handsome singer, a town dance, and an event so traumatic that Clara and Breda have not left the house since. It's difficult to understand Ada's place in the story, the one sister that leaves the house to go out in the world, and why she forces them to do this repeatedly. On this one particular day, they invite the fishmonger Patsy, their one contact with the outside world, to play a part in their story. Patsy has his own issues, and a surprising connection to the story. There's a glimmer of hope for a way out of this endless cycle, but it's quickly squashed, and the sisters' sad life continues as before.

This four-person cast could not be better, nor could Wendy Knox's direction. Each actor is so immersed in their character, and each character is more than she or he seems. Katherine Ferrand is a thing of fragile and disturbed beauty as the childlike Clara. Melissa Hart is also excellent as the somewhat stronger and more together sister Breda. Virginia Burke is the sane center of this family as Ada, until we learn that she has her issues too. Irishman Patrick Bailey with his authentic accent is a delight to listen to as he tells the sisters his stories, and later reveals a deeper and darker side to Patsy. These four characters don't so much converse with each other, as recite long monologues, repeating their part of the story or talking to themselves, often not hearing what the other has said. Several passages are repeated throughout the play, creating a harshly beautiful rhythm.

This is the second play I've seen at the New Century Theatre where the stage has been built out, and I've come to see that it's a must for most plays. Even though a few rows of seating are lost, the usual wide and shallow stage often just doesn't work. In this case, Andrea Heilman has designed a shabby but neat little home on the square stage, with vintage kitchen appliances and tape players.

The New Electric Ballroom continues for only two more weekends, so get there soon if you like complex, layered, disturbing, engrossing, tragic, beautifully performed theater.