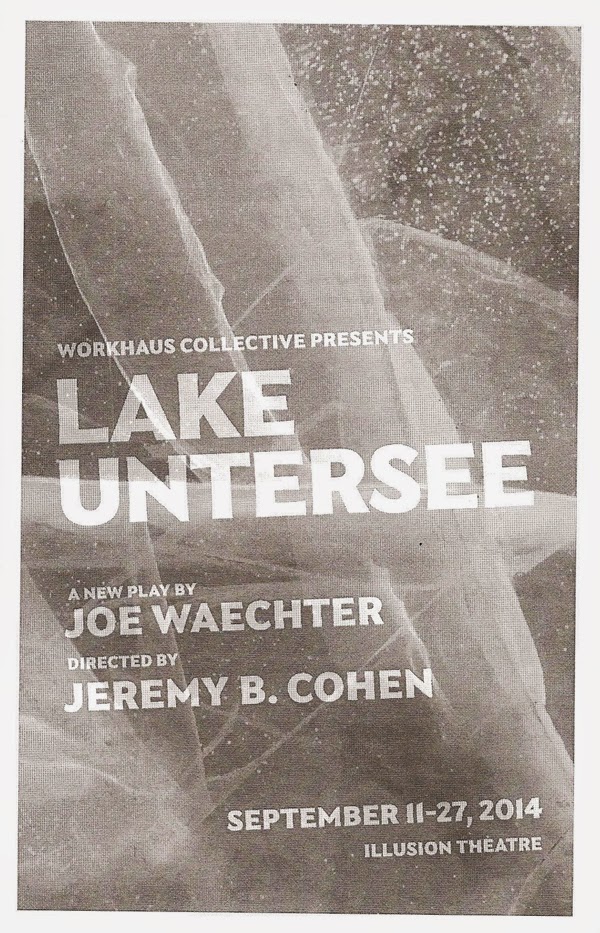 Lake Untersee, a new play by local playwright Joe Waechter, is odd and beautiful, sharply realistic and wildly fantastical. It's a little bit difficult to reconcile those two sides and figure out what is actually happening, but it's probably best not to worry too much about it and just enjoy the lyricism of it all, and this well-done production by Workhaus Collective (which with I was previously unfamiliar).

On a bare stage hung with plastic tarps and one big sheet of ice, we meet Rocky (a compelling Michael Thurston, a student at St. Paul Conservatory for Performing Arts). Rocky is a typical teenager who has trouble communicating with his divorced parents. Rocky's relationship with his parents, who are too busy with their own separate lives to pay much attention to him, is very realistically drawn. Most teens and parents of teens can probably relate to this family, even though Rocky takes it to the extreme and literally grunts at his parents when he doesn't know what else to say. Perhaps not so typical is that Rocky is in love with someone, or something, that he believes is trapped under the ice in Antarctica. The letters he writes to this being he calls Charlie are just beautiful, even if I didn't understand who or what they were directed to. Maybe that doesn't matter, maybe it's just Rocky expressing feelings he wishes he had for someone.

Rocky's mother Phyllis (Jennifer Blagen), a writer with writer's block, can no longer handle him, so she allows him to move in with his father Jason (Michael Booth) and his new girlfriend, the artist Gale (Adelin Phelps). Gale seems to be the only adult who allows Rocky to be who he is, and doesn't put pressure on him to have a girlfriend or go to college. The adults are dealing with their own issues - career, relationships - and don't seem to notice that something is really wrong with Rocky, until he has a breakdown in a clothing store dressing room that will break your heart. It's at this point that the fantastical element of the play kicks in, as they all end up in Antarctica looking for Charlie. Or maybe it's all part of Rocky's hallucination. Either way, it's only in this world that Rocky's parents show him the unconditional love and support that he so desperately craves.

I'm not sure what this play means, or what actually happens. But the writing is beautiful, the characters and situations relatable and relevant, all well-performed by this four-person cast. Dive into Lake Untersee and see for yourself, continuing through September 29.