"The Glass Menagerie" at Lyric Arts 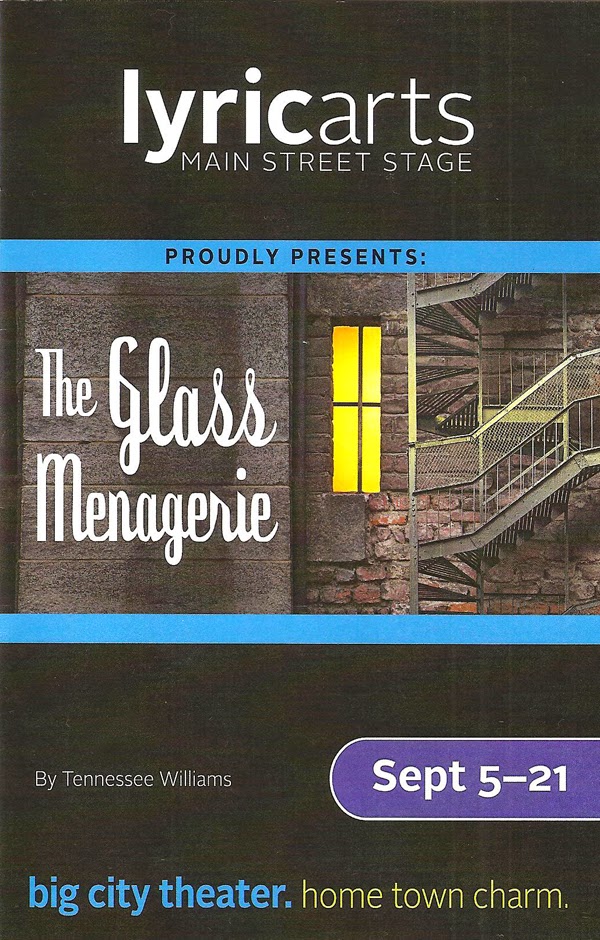 Tennessee Williams is one of America's greatest playwrights, and his most auto-biographical play, The Glass Menagerie, is an American classic and one of my favorite plays. All of William's plays are beautifully tragic, and this story of a fading Southern belle and her two misfit children is no exception. Lyric Arts in Anoka is opening their 2014-2015 season with this classic, and it's a fine production, although it didn't quite touch me as deeply as others have in the past. They played up the comedy a little too much for my taste; while there are some great one-liners, I like my Tennessee Williams dark and gloomy. Still, the cast does a fine job, and there are some wonderful musical effects and an interesting use of video projections. And The Glass Menagerie is always a play worth seeing, with it's stark and tragic beauty.

The Glass Menagerie is a "memory play," in which Tom (a stand-in for Williams himself) is a character in the play and also narrates from some time in the future. The play is therefore cast in nostalgia, wistfulness, and regret. The aforementioned fading Southern belle is Amanda Wingfield, one of Williams' best characters. She lives with her two adult children in a small apartment in St. Louis in the late 1930s. Tom dutifully supports the family by working at a shoe factory, where he feels stifled and bored with life. Laura has a slight physical impairment that has caused her to become reclusive, wanting nothing more than to stay in the apartment, listen to records on the Victrola, and arrange her glass figurines, her menagerie. Amanda is constantly nagging her children - telling Tom how to chew his food and how to sit at the table, cajoling Laura into leaving the house to attend business school or entertain a "gentleman caller." Because she's unhappy with the way her life turned out (her charming grinning husband left her with two children to raise), she talks constantly of her glorious past and happy youth. She wants Laura to be as popular as she was, but Laura is nothing like her, and the time and place in which they live is nothing like the one in which she came of age. When a gentleman caller finally arrives, "the long-delayed but always expected something that we live for," there is hope for a moment. But the experiment fails miserably, Tom leaves the family to find his fortune in the world, and Laura is left with her glass menagerie. Part of the tragedy is that Amanda really does want her children to be happy and successful, as she wishes on the moon, but she has no idea how to help them achieve that in this modern, Northern, and utterly foreign world.

The Wingfield home is sparsely furnished, with just a hint of the outer walls and terrace where the family goes to smoke and gaze at the moon. Melancholy music plays at just the right moments, as Tom's narration makes you feel like you're peeking into a faded photo album of days long past. The video projections play on four broken pieces hanging above the stage, like the Wingfiends' broken lives. I'm not sure it's entirely necessary to see a candle flame or blue roses when such things are mentioned, but the effect is relatively subtle. The most successful is the photo of the long gone Mr. Wingfield, whose handsome grinning face hangs eerily over the family. As Amanda, Patti J. Hynes-McCarthy is fluttery and flustered and never stops moving, which is just how Amanda should be. Ty Hudson's Tom is boisterous and angry, outwardly expressing his frustrations with the situation. Samantha Haeli has the physical limp, hesitant voice, and lack of selficonfidence that is Laura, and also shows her beginning to open up in her own awkward way. Finally, as that all important gentleman caller, Randy Niles portrays All-American charm and confidence (not unlike his character in Picnic), a stark contrast to the rest of the family.

The Glass Menagerie continues through September 21, with discount tickets available on Goldstar.