"Alice in Wonderland" by Flying Foot Forum at the Lehr Theater 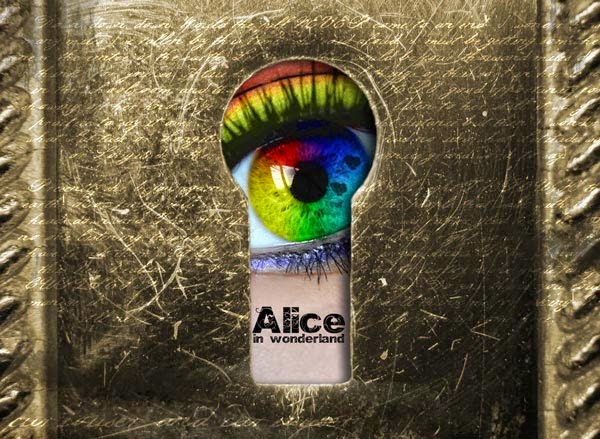 Like the rabbit in Lewis Carroll's beloved novel Alice in Wonderland, I ran to the theater last night thinking "I'm late! I'm late!" A combination of forgetting I needed to get gas, construction that caused me to miss my exit, a determination to get my last IceCrema of the summer, and the theater entrance not being where I thought it was caused me to finally arrive where I was supposed to be at just after 7:30. But fortunately, Flying Foot Forum's adaptation of Alice in Wonderland is not your typical theater performance, with everyone sitting quietly in their assigned seat well before the curtain goes up, so I was actually right on time. The show begins not in the Lehr Theater but in the lobby (tip: do not go to the entrance under the marquee on 5th street, but rather the entrance around the corner on St. Peter), where a group of crazily costumed actor/singer/dancers lead you down the rabbit hole into this delightfully mad world.

Like the original, this Alice in Wonderland doesn't make a whole lot of sense and doesn't really have a throughline plot, other than Alice leaving her home in search of something more. Rather it is comprised of a series of odd vignettes with the various characters she meets down that rabbit hole and through the tiny door. From the lobby, we do eventually make our way to the Lehr Theater (named for the incomparable Wendy Lehr), which has been transformed into a Wonderland with colorful cartoonish sets (by Peter Baker, Robin McIntyre, and Joe Chvala) on all sides of the theater. There are just a few chairs for those who need them, otherwise take a seat on the floor or stand in the back, and be prepared to move around. Warning: this show, billed as "a new immersive musical event" is participatory; you will be asked to stand up and dance. And if you're like me, you might not find this amusing, but rather awkward and uncomfortable as you count the seconds until the lights go back down. But I appreciate the spirit of it all, and others seemed to be enjoying it, so consider yourself forewarned and prepare to either jump in with both feet, or find a quiet corner from which to observe the action. 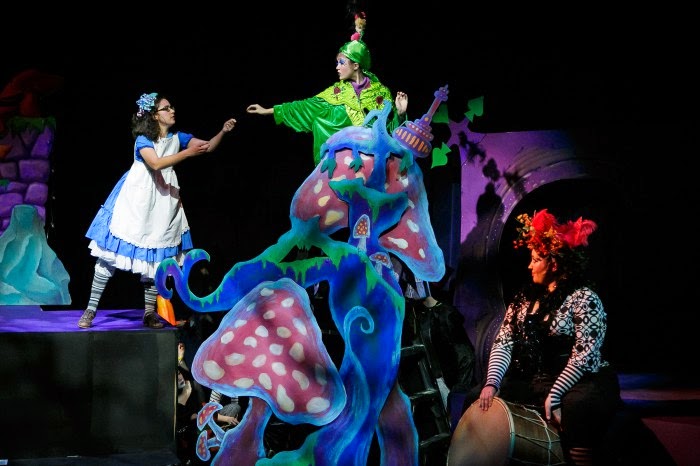 All of our favorite characters are here, the White Rabbit (Ed Williams, Jr., an appealing host and guide), the Cheshire Cat (an incredibly agile Brian Evans who throws himself around the space with irrepressible energy), the Queen of Hearts (a completely unrecognizable Jake Endres), the Dormouse (an adorably sweet and simple Charles Robison), the Duchess (a deliciously creepy baby-tossing Bryan Porter), and of course, Alice herself, represented by the golden voice and childlike wonder of Laurel Armstrong (who is sharing the role with Courtney Miner on alternate dates). The energetic ensemble, who gamely throw themselves into this bizarre world, includes students from the St. Paul Conservatory for the Arts (in which the theater is located) and a rotating cast from area high schools. All are dressed in colorful and wacky costumes (by Mary Anna Culligan, Cindy Forsgren, and Joe Chvala) and outrageous make-up.

Creator/director/choreographer Joe Chvala (who also appears as Tweedle Dum and others) brings his signature "flying foot" percussive style of dance to some rousing group numbers, from a dance-off at the door of Wonderland to the falling pack of cards. In addition to the aforementioned audience participation, volunteers take part in a dance competition for the queen. All of this is accompanied by fantastic music performed by the band and cast, including the unmistakable vocals of Natalie Nowytski, lending an Eastern European flair to the music.

Flying Foot Forum's Alice in Wonderland is a wonderfully inventive adaptation of  a beloved story. If you've got little ones, bring them along, they seem to love it. Part of the fun was watching the kids watch the show, including a toddler in a leopard print skirt and red polka dot rain boots who was about the cutest thing ever, laying on the step with her chin resting on the stage, complete enraptured. Head to downtown St. Paul to experience this delightfully mad world, playing now through October 12.