"The Heidi Chronicles" at the Guthrie Theater 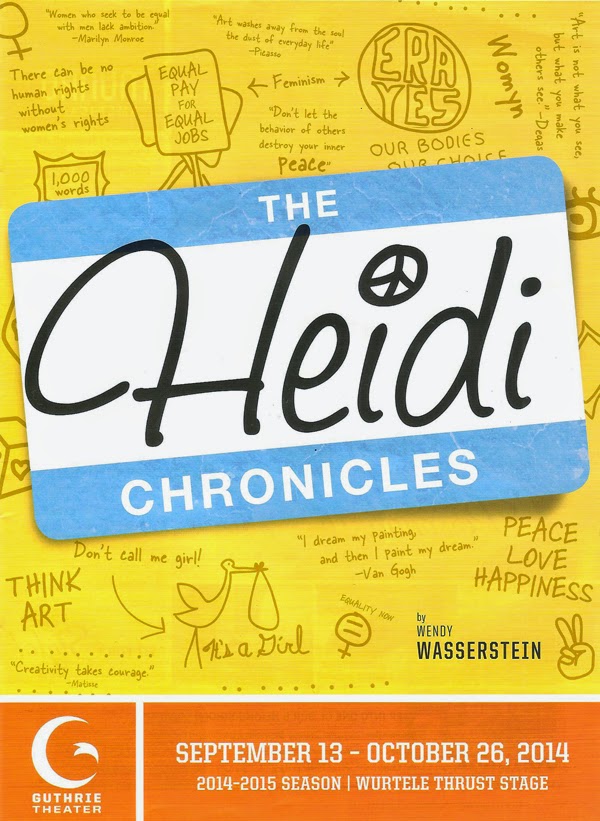 Playwright Wendy Wasserstein (whose work was last seen on the Guthrie stage in 2008 with the excellent Third) won a Tony and a Pulitzer Prize for her most well-known work, The Heidi Chronicles. It's an epic play, covering nothing less than the changing role of women in American society in the '60s, '70s, and '80s through the life of one woman. We see about a dozen scenes of Heidi at 2-3 year intervals throughout her life as she struggles to figure out who she is and what she wants in life during a time in America that saw great social change. These snapshots of a life create a complete picture of who this woman is, although I couldn't help but wish we had more time to spend with each different Heidi throughout the years (someone should adapt the play into a TV series, with each scene expanded into a 10-episode season). This fantastic cast of Guthrie faves and newbies bring Heidi's story to life, along with some pretty fabulous period costumes and ingenious set design.

The play opens with Heidi in the present day, aka 1989, giving a lecture on women artists. We then flash back to a high school dance in 1965, and follow Heidi throughout her life as she goes to college, campaigns for McCarthy, becomes an art historian, and watches her friends get married and have children, until we end up back in the present day again. All of these events inform who Heidi has become, from a baby shower to lunch with an old friend to a TV show about baby boomers. We also follow three of Heidi's friends throughout the years: her friend Susan, who goes from a boy-crazy teen to living in a women's collective to a powerful TV executive; her on-again-off-again boyfriend Scoop, magazine editor for the baby boom generation; and her gay friend Peter, successful pediatrician. Their hair and clothing changes drastically over the years, but their friendship, although strained at times, never wavers.

As Heidi, Guthrie newcomer Kate Wetherhead is a likeable heroine, transforming from awkward teenager to confident professor. Fellow newcomers play the men in Heidi's life - Zach Shaffer as the charming and dependable Peter, and Ben Graney as the jerk Heidi can't seem to rid herself of. Local actors make up the rest of the cast, including Tracey Maloney as Heidi's constant friend who continually redefines herself, Stacia Rice as a range of characters from a conservative mother of four finding her liberation to a vapid TV anchor, Mo Perry (making her welcome Guthrie debut) as an early '70s radical and a soft Southern wife, Eleonore Dendy as a naive young woman in the '70s and a "have it all" woman of the '80s, and Sam Bardwell who is, as usual, fun to watch as multiple minor characters, even when he doesn't say anything.

Clint Ramos does a remarkable job with both costume and set design. From mod '60s dresses to '70s bell-bottoms to '80s shoulder pads, this show is like a fashion parade through the decades. Many quick-changes are involved, especially for Heidi who rarely leaves the stage, and marks the passage of years by adding a jacket or removing a headband. The set consists of a huge wall made up of drawers, file cabinets, empty frames, and shelves, with secret compartments that open to reveal signage that helps establish time and place in the rapidly moving years. Huge set pieces are efficiently moved in during scene changes, from massive museum stairs to a TV studio to a living room. Kudos to the stagehands and everyone behind the scenes for making everything run smoothly. The play also uses music well to set the time and tone, with scenes frequently ending with characters singing along to classics.

The Heidi Chronicles continues on the Guthrie Thrust stage through October 26.