"Marcus; or the Secret of Sweet" by Pillsbury House Theatre and The Mount Curve Company at the Guthrie Theater 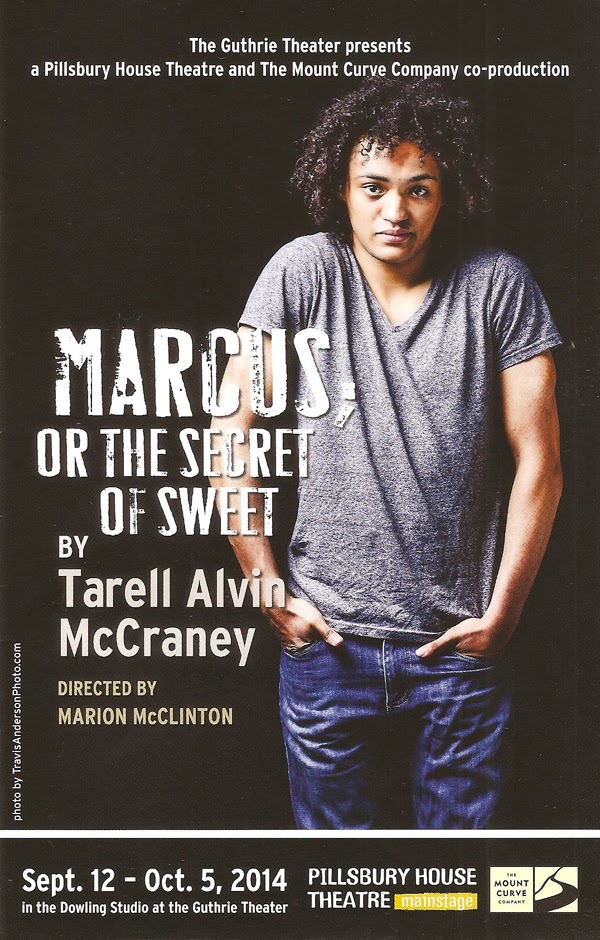 With programming on three beautiful and very different stages, the Guthrie Theater provides a great opportunity to see multiple shows, even on the same day. And with free wifi, multiple dining options including a lovely little coffee/snack bar, and plenty of cozy places to sit, the Guthrie is an inviting place to spend the day. I took advantage of this opportunity this week and saw a matinee of The White Snake in the Proscenium Theater followed by an evening performance of Pillsbury House Theatre and The Mount Curve Company's Marcus; or the Secret of Sweet in the Dowling Studio (next week: The Heidi Chronicles on the Thrust Stage). Neither of these two shows are Guthrie original productions, but both are such beautiful and unique expressions of what this thing we call theater can be, from a Chinese legend of a snake that takes human form, to a new and very modern play that draws from Nigerian mythology. You can read my thoughts on The White Snake here, but now - Marcus.

I've been eagerly awaiting the conclusion of Tarell Alvin McCraney's Brother/Sister trilogy, having seen the first two installments presented by Pillsbury House in the Guthrie's Studio theater in the last few years. All three tell universal stories of love, loss, family, and relationships through a specific set of characters in Louisiana, who are named for gods in the Yoruba mythology of Nigeria. We first meet this interrelated cast of characters in the first play, In the Red and Brown Water, which focuses on a young track star named Oya and the choices she is forced to make. The Brothers Size is a smaller cast, focusing on Oya's ex-lover Ogun, his brother Oshoosi, and their friend Elegba. Marcus returns to the large cast format, with the title character being the son of Elegba, long deceased (a handy family tree in the program helps explain the characters and relationships). Many of the characters from the first play, or their offspring, return in this one. The three plays are each stand alone pieces, but seeing all three of them provides a richer understanding of this world that is so specifically created in McCraney's unique voice.

This play is a coming of age story about 16-year-old Marcus, who is dealing with the death of a family friend, questions about the father he never knew, growing independence from his mother, an impending storm, and coming to terms with his homosexuality. Marcus' father Elegba, who may also have been "sweet," could dream the future, and Marcus might have inherited that skill. He dreams about a man in a rain storm and doesn't know what it means. This short 90 minute play feels epic and mythical, with Marcus' universal story told in specific detail. This play has a much more hopeful ending than the previous two plays, as if finally Marcus can realize the dreams of those that came before him. Dreams of happiness and love and a life fully realized.

This excellent ten-person cast shines under the direction of Marion McClinton (who has directed all three Brother/Sister plays for Pillsbury House). Rising young talent Nathan Barlow is excellent as Marcus, conveying all the uncertainty of a young man struggling with his identity and his family, as well as the determination to come out on top of that struggle (someone referred to this as his "breakout performance," they obviously didn't see Passing Strange). Lauren Davis and Joy Dolo give a couple of spirited and charming performances as Marcus' best friends, one of whom is more accepting of his truth than the other, and Thomasina Petrus is strong and powerful as Aunt Elegua, who knows more about Marcus than she shares. James A. Williams is the only cast member to appear in all three plays, and his presence is warm, welcome, and familiar as he provides a connecting link between the stories in Ogun Size.

Talented young playwright Tarell Alvin McCraney has such a unique vision and voice, and these three plays create such a specific world with people that are familiar and beloved. A unique feature of McCraney's writing is that the characters speak stage directions (Marcus smiles, Ogun exits), which may take a minute to get used to but really give more insight into the characters. When characters are not in a scene, the actors sit on the sidelines in lawn chairs observing, continuing to witness the story.

Marcus; or the Secret of Sweet continues through October 5. You needn't have seen either of the previous Brother/Sister plays to enjoy this beautifully written and acted play. But definitely if you did see either of the two previous plays, you'll want to see Marcus to see how the story ends and continues. The final moments are a beautiful payoff.