The 2014 Ivey Awards at the State Theatre 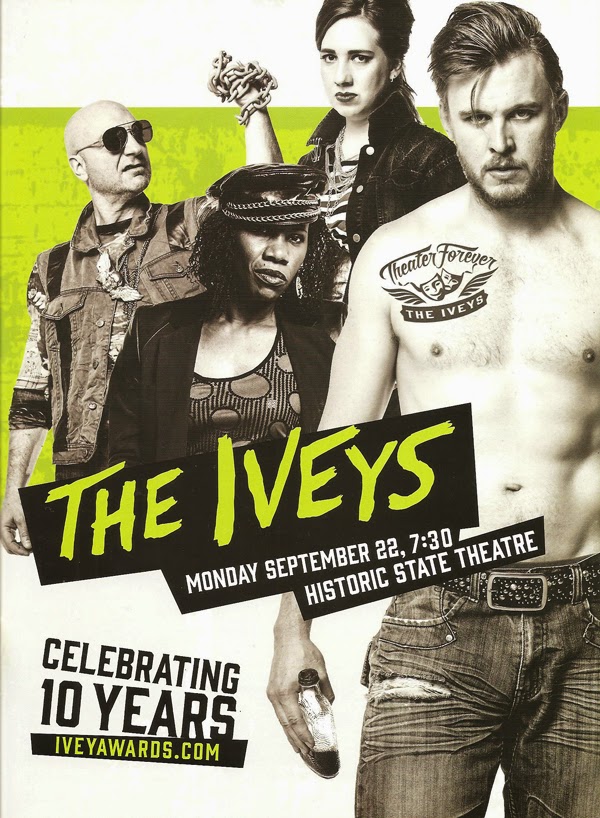 Last night was the highlight of the theater year - the Ivey Awards. Celebrating its tenth anniversary, the Iveys honor a dozen or so individuals or productions from the last year. Unlike the Tonys, there are no set categories or nominees that people and shows compete in, but rather, exceptional work at any of the 68 participating theaters is honored, based on evaluations by volunteers. But in addition to the actual awards, and perhaps more importantly, the Iveys are a chance for theater artists and theater-goers to gather and celebrate all the brilliant work that has been done in the Twin Cities over the past year.

The hilarious Randy Reyes returned as co-host, along with new host, the fantastically talented Christina Baldwin (who sadly did not sing). They made for a funny, charming, and entertaining pair of hosts, with a running gag that had Randy attempting to share some of his writing, and Christina reigning him in, only to be interrupted by a crazy fight scene. Presenter pairs are typically made up of one winner from last year, along with someone from one of the Iveys' many sponsors. Speaking of which, this year's obligatory sponsor presentation was done with charm and aplomb by Ari Hoptman as a distinguished German man, speaking German with English words thrown in (my fellow study abroad students and I used to call that Germlish, a language in which I am fluent).

In addition to a special Ivey for the man who started this whole crazy wonderful thing ten years ago, Scott Mayer, and the usual Emerging Artist and Lifetime Achievement Awards, ten translucent green conical pyramids were given out honoring work in ten productions. I'm proud to say that I saw eight of these ten productions, which might be a record high percentage of Ivey winners attended for me. But it's not about me, so on to the awards (but it's still a little bit about me, so click on the titles to read my full thoughts on each show).

Two years ago I called Tyler Michaels my favorite new artist of the 2012, and I'm thrilled that the Iveys finally caught up with me, handing him a much deserved Emerging Artist Award. Just this year he thrilled audiences and "rocked my world" as the Emcee in Cabaret, made his charming Guthrie debut as Freddie in My Fair Lady, and was featured in two shows at the Chanhassen (and can currently be seen there in Hello, Dolly!). Singing, acting, comedy, drama, aerial work, physical theater - there seems to be no end to this young man's talents.

All nine previous Lifetime Achievement Award winners were honored with creepy cool huge puppets by In the Heart of the Beast, and this year's award went to Michael Robins and Bonnie Morris for their 40 years as Illusion Theater's Executive Producing Director and Producing Director, respectively. I'm a big fan of Illusion and the work that they create there; you should definitely check them out if you haven't yet (next up: last year's Ivey Lifetime Achievement Award winner, playwright Jeffrey Hatcher, in his one-man version of Hamlet).

Because this is a theater awards show, there were of course wonderful performances, excerpts of past and upcoming shows. There's no better way to start any show than with Tyler Michaels descending from the ceiling, as he did in "Wilkommen" from the aforementioned Cabaret, accompanied by the entire fantastic cast. Other performances included a hilarious performance of Men-Struation by Brave New Workshop; a really cool song from Freshwater Theatre's Archival Revival; and Regina Marie Williams as Shug Avery singing "Push Da Button" from The Color Purple, coming to Park Square Theatre in January. To close the show, the cast of Bloomington Civic Theatre's just closed Guys and Dolls shared their energetic version of "Sit Down, You're Rockin' the Boat," sending us out into the beautiful fall night to the fun of the after party.

And with that, another Ivey Awards show and another season of spectacular theater comes to a close. But the good news is that great theater never stops in this town. So get out and see some local theater. Stay tuned to Cherry and Spoon for suggestions and info on what's available!