"The White Snake" at the Guthrie Theater 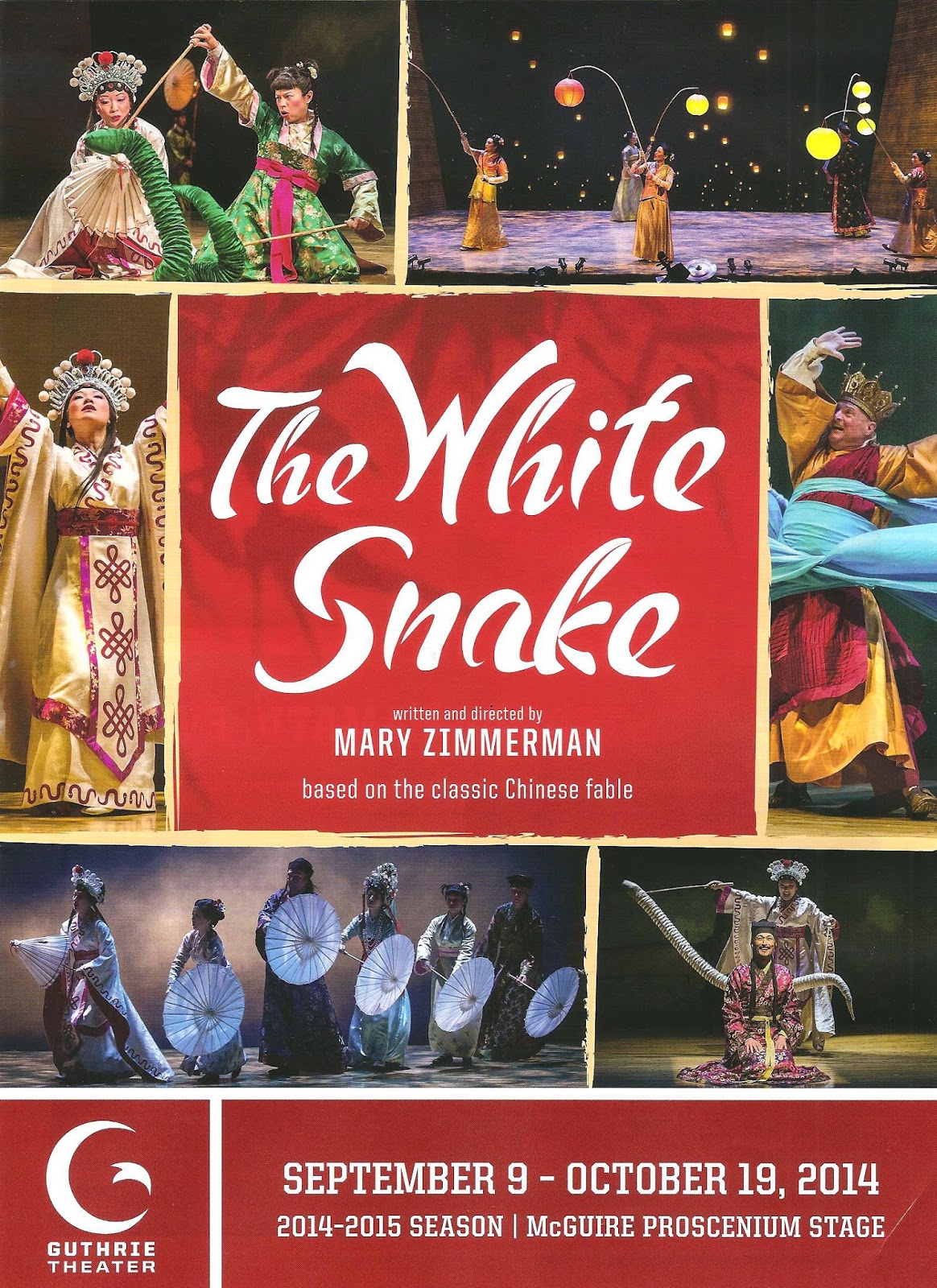 With programming on three beautiful and very different stages, the Guthrie Theater provides a great opportunity to see multiple shows, even on the same day. And with free wifi, multiple dining options including a lovely little coffee/snack bar, and plenty of cozy places to sit, the Guthrie is an inviting place to spend the day. I took advantage of this opportunity this week and saw a matinee of The White Snake in the Proscenium Theater followed by an evening performance of Pillsbury House Theatre and The Mount Curve Company's Marcus; or the Secret of Sweet in the Dowling Studio (next week: The Heidi Chronicles on the Thrust Stage). Neither of these two shows are Guthrie original productions, but both are such beautiful and unique expressions of what this thing we call theater can be, from a Chinese legend of a snake that takes human form, to a new and very modern play that draws from Nigerian mythology. First, The White Snake (read my thoughts about Marcus here).

The Chinese legend of The White Snake has taken many forms in literature and the arts. This new adaptation, written and directed by Mary Zimmerman, premiered at the Oregon Shakespeare Festival two years ago and has made several stops around the country before landing in Minneapolis for a month or so. This wonderful legend is told with such creativity and innovation; it's truly unlike anything I've seen before. The result is fun, charming, moving, poignant, whimsical, and magical.

The titular snake lives high on a mountaintop and has studied for thousands of years to become immortal. But her friend the Green Snake, younger and not as advanced in her studies, longs to be among the human world and convinces the White Snake to join her down in the city, just for a day. They transform themselves into human form and pose as a lady and her servant. The White Snake falls in love with a pharmacist, marries him, and runs a successful business with her skills in the healing arts. But a monk from the monastery on the mountain knows of her true nature, and is jealous of her success. He goes to great lengths to end her human experiment, but doesn't know the force he is up against. In the end, the love between the snakes and the humans wins out.

Much of this cast has been with the production since the beginning, and it shows. Amy Kim Waschke is commanding as the powerful and elegant White Snake, and Tanya Thai McBride is so energeticly charming as Greenie, and with deft manipulation of the green snake puppet, gives it life and a personality as charming as her own. As the White Snake's husband, Jake Manabat easily portrays the love he feels and the doubt he struggles with. The rest of the ensemble play all of the other roles, from animals to townspeople to gods. Adding greatly to the charm and poignancy of the piece is the three piece orchestra, creating timely sound effects and lovely music.

In addition to the snake puppets, effects are also created with an elegantly floating billowy white cloth (clouds), soft pale blue ribbons of fabric falling from the sky (rain), a pharmacist cabinet rising from the floor that doubles as a bed chamber, beautiful lighting and video projection, and wonderful colorful costumes from gods to animals (particularly a spectacular crane) to traditional Chinese dress (set by Daniel Ostling, costumes by Mara Blumenfeld).

The White Snake is such a beautiful story, so delightfully told, with an ending that brought tears to my eyes (don't be afraid, it's impossible to die alone). The central love story has a beautiful message: the White Snake's husband learns that he loves her as she is, she doesn't need to hide parts of herself, even those parts she thinks might be repulsive to him. I'm grateful to the Guthrie for bringing this truly delightful and unique production to Minneapolis for us to experience and enjoy (playing now through October 19).