"If We Were Birds" by 20% Theatre Company at nimbus theatre 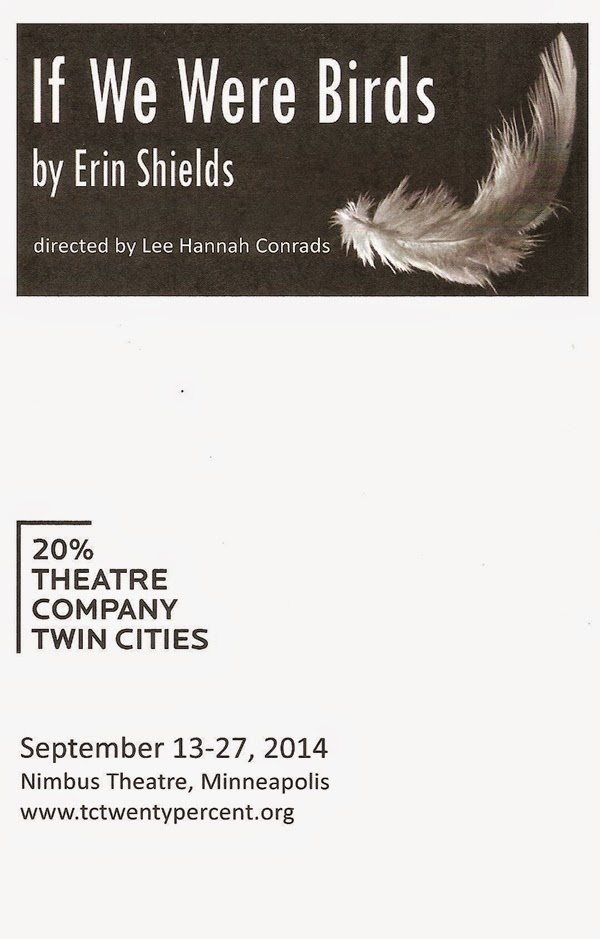 This is a tough one, friends. 20% Theatre Company's production of the new play If We Were Birds is not easy to watch, but it is so worth it if you can steel yourself to sit through what might be the most realistically brutal scenes I've ever seen on stage. There is a rape scene, actually more than one, that is so painful and difficult to watch that it almost seems gratuitous if it were not for the fact that too many women live this experience every day, on college campuses, in the military, at the hands of trusted friends, or in the spoils of war, which is the focus of this piece. Based on the Greek mythical characters, sisters and princesses of Athens Procne and Philomela, the play is, as director Lee Hannah Conrads notes in the program, "a classical interpretation of a contemporary tragedy."

Beloved daughters of King Pandion of Athens, Procne and Philomela live a happy and comfortable life. Younger daughter Philomela seems especially blissful and ignorant of the troubles that those who are not in her privileged position face. When celebrated soldier King Tereus of Thrace brings a gift of slaves to Pandion, Philomela is shocked at what they have to say and defensive of her father and way of life. To reward Tereus for his victories in battle, Pandion gives him his oldest daughter's hand in marriage. Procne must leave her sister and home to be a wife of the king. After a few years of a mostly happy life, Procne asks her husband to return to Athens and bring her sister for a visit. Tereus obliges, but on the return voyage he finds that he wants Philomela, so he sets her up in a cabin where he repeatedly rapes and tortures her. When Procne finds out, she vows revenge, and the sisters serve him up some black-eyed peas... or something. Something so dark and twisted only the Greeks could think it up.

The talented cast includes six women playing the Greek Chorus, each of whom represents a victim of sexual violence in a 20th Century war (or so the program notes; I didn't get that from the play itself, perhaps due to my own ignorance of foreign affairs). Dann Peterson is the warm loving father who reluctantly gives his daughters over to this man he admires a bit too much, Ethan Bjelland is menacing and frightening in his portrayal of the utterly reprehensible Tereus, and Jill Iverson gives a fierce performance as the protective older sister. But the star of this show is Suzi Gard as Philomela. Hers is a fearless performance, full of vulnerability and strength, and incredibly brave. She is literally thrown and dragged across the stage, wearing next to nothing, exposing herself physically and emotionally. Suzi's Philomela makes a believable transition from a carefree happy young woman to something scarred and broken, yet resilient. Kudos to fight coordinator Jessica Smith for making it all look so painfully real.

Tereus is a soldier who is unable to turn off his violent side when away from the battle field. I couldn't help but think of the recent allegations of domestic abuse and violence against NFL players, men who are also trained to be violent and aggressive at their jobs, some of whom seem unable to turn it off when they get home. This is definitely not a play that resides only in the past.

If We Were Birds is beautifully written by playwright Erin Shields; it feels epic and mythical, but also fresh and modern. The subject is a difficult one but one that's important to witness and examine, something that this production and this cast do well. It's a short run and playing through this weekend only, so get their quickly to experience this challenging and rewarding piece (discount tickets available on Goldstar).