"Radio Man" at the History Theatre 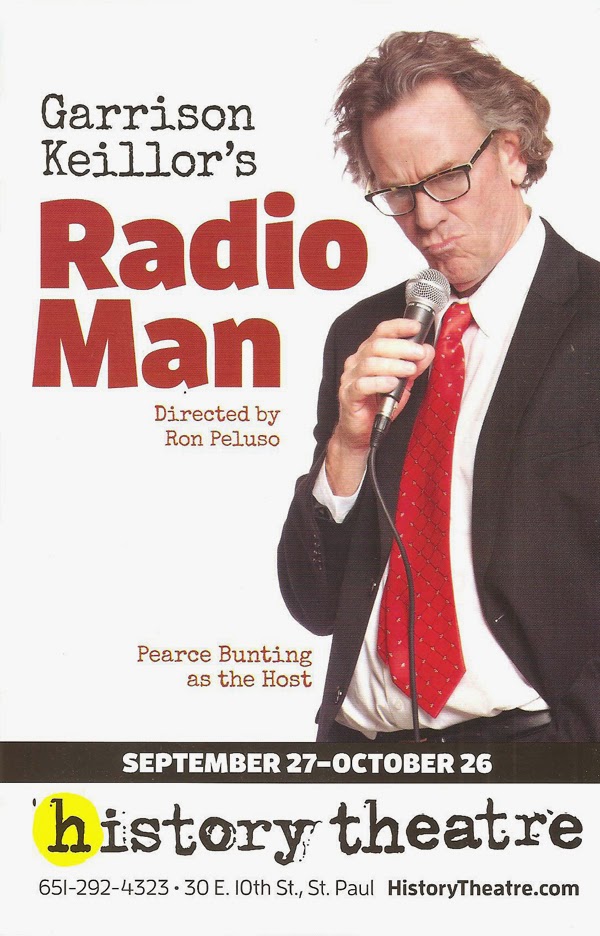 Full disclosure: I'm a huge fan of Garrison Keillor and A Prairie Home Companion (I even worked as an unseen extra on the 2006 movie). He's the Mark Twain of our generation, and is Minnesota's best export. You know how the Dixie Chicks infamously said that they were embarrassed to be from the same state as George Bush? It's exactly the opposite for me where Garrison is concerned - if A Prairie Home Companion is one of the things that Minnesota is most known for, I am proud to be a Minnesotan. So of course, I absolutely love his new play Radio Man, the first he's written. I saw a reading of it early this year as part of the History Theatre's Raw Stages festival and loved it then, but this full production, now playing at the History Theatre, is so much more polished and complete, and really a thing unto itself and not just an episode of A Prairie Home Companion on stage. Yes there is the familiar music, the jingles for Powdermilk Biscuits, rhubarb pie, and ketchup, stories from Lake Wobegon, and beloved characters including Dusty and Lefty and Guy Noir. But there's also a story and a character (the host of a radio show called A Prairie Home Companion who bears a striking resemblance to Garrison) who we get to know as he reminisces about his past and contemplates his future. Radio Man is A Prairie Home Companion come to life before our eyes, but with the added depth of a theatrical story and arc.

Radio Man is comprised of four elements woven together. There is the present reality, in which the host and his guests are performing an episode of a radio program called A Prairie Home Companion. In this reality, he interacts with the stage manager, the head of the radio station, and an old flame. The second element is the coming to life of the stories told in the radio program, from Lake Wobegon to Guy Noir. Another important element is memory; the boy version of the host appears onstage as he reminisces about growing up listening to radio and longing to be part of that world. Finally, the host hallucinates conversations with his characters, such as the "Norwegian bachelor farmer." This may sound confusing, but it's woven together artfully, clearly directed by the History Theatre's Artistic Director Ron Peluso, with costume changes, sets, and music to make clear the transitions. New songs written by Garrison and his APHC bandleader Richard Dworsky are performed both within the radio program (a sister duo and a quartet, both with lovely harmonies) and by the ensemble, musical theater style, as exposition or commentary, with the ensemble doubling as members of the band.

The dream cast includes Pearce Bunting who, as the host, is not just doing a Garrison Keillor impression, but is providing his own interpretation of this character that's so familiar and beloved. A character that is introspective, befuddled, charming, amusing, and ever present as he watches his life and his fictional creations play out before him. Filling the role of Rich Dworsky is Jay Albright who, it turns out, is not just a brilliant comedic actor/singer but also a talented pianist and musical director. Angela Timberman brings her perfect dry humor and withering looks to the role of the beleaguered stage manager, and also steals scenes as a couple of very different characters in the Lake Woebegon story. Rounding out the excellent ensemble and playing multiple characters (and instruments) are Jon Andrew Hegge, Laurie Flanigan Hegge, Kendall Anne Thompson, and Peter Thomson, with a clear-voiced and enthusiastic young Jonah Harrison as the child version of the host and Sandra Struthers Clerc as a woman from his past.

Chris Johnson's set portrays the radio stage like an empty runway, with the two dimensional buildings that form the backdrop slightly askew to hint at the changing realities in the play. E. Amy Hill's costumes are a crisp black and white with touches of Garrison's trademark red, with costume changes taking us to Lake Wobegon or the new Old West.

If you like A Prairie Home Companion, you'll love Radio Man. And if you don't, well, you call yourself a Minnesotan?!  Radio Man is everything we love about APHC and so much more, and is a chance to experience Garrison's unique, folksy, poignant, nostalgia-tinged humor in yet another format (playing now through October 26 at the History Theatre in downtown St. Paul).