"The Mystery of Irma Vep" at the Jungle Theater 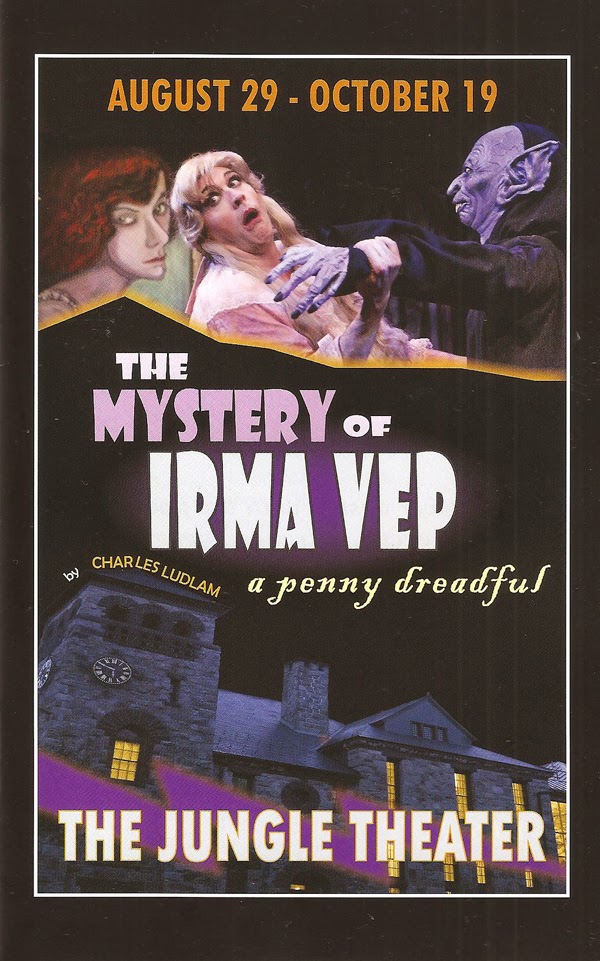 Vampires, werewolves, Egyptian mummies, English moors, haunted portraits, a sophisticated Lord and Lady, an Irish maid, a Scottish stable hand, and a euphonium. Mix it all up and you have the ridiculous and hugely entertaining farce that is The Mystery of Irma Vep. This 2010 Jungle hit is back again this year with the same director/scenic designer, Joel Sass, and one of its stars, Bradley Greenwald (proving once again there truly is nothing he can't do). The role(s) previously played by Stephen Epp (who is currently in Louisville with The Moving Company's Love's Labour's Lost, which they are bringing to the Lab in November) is played by another Stephen, Cartmell, and he brings his own kind of brilliance to the show. Watching these two actors fully commit to the distinct outrageousness of multiple characters is a joy.

This spoof of melodrama is set in the moors of England in some century past. At the spooky estate called Mandacrest, we meet Lord and Lady Hillcrest and their two kooky servants, the stern Irish maid Jane (Stephen Cartmell) and hunchback stable hand Nicodemus (Bradley Greenwald). Lord Edgar (Stephen) is still mourning his first wife, Irma Vep, and his second wife, Lady Enid (Bradley), is adjusting to live at Mandacrest. Enid urges Edgar to move on, but he just can't shake the hold that Irma has on him. Since he's an Egyptian scholar, he decides to look for the answer in a tomb in Egypt (I know it doesn't really make sense, just go with it). He returns home with a mummy case in tow, but strange and mysterious things are still happening. Intruders, hidden passages, violent deaths, it's all too ridiculous to relate or make sense of here, but it's a wild and fun ride.

Every line and moment is milked for the maximum possible entertainment value; no pun or gag is too big or too small to go for, and they pull it off beautifully with well-choreographed precision. The quick changes between characters happens so fast that it's easy to forget it's the same actor. As deliciously wacky as Jane and Nicodemus are, I think I love Lord Edgar and Lady Enid the best. Stephen's Lord Edgar is almost dashing in an over-the-top way, while Bradley's Lady Enid is a sweet, delicate thing that you almost pity (with a dainty walk reminiscent of Eulalie Shinn). And although we don't get to hear Bradley's gorgeous voice in this production, we do get to hear him play the euphonium to hilarious character-specific effect.

Joel Sass' set is a dark and cluttered and creepy room, filled with stuffed animals from Lord Edgar's hunting expeditions. The Egyptian tomb scene is efficiently created in a small space at the front of the stage. As per usual at the Jungle, the sound and lighting design (by Sean Healey and Barry Browning) help create all the crazy effects, including some clever flashlight work. And Bradley and Stephen could not do what they do without Matthew J. LeFebvre's costumes that are not only detailed and character-specific, but, one assumes, easy to get in and out of without looking like tearaway clothing. This is the only play I've ever been to where the behind the scenes crew/stagehands take a bow at curtain call (in which, by the way, all four main characters take their bow in character), and deservedly so. This is one of those shows that would be just as much fun, perhaps moreso, to watch from backstage.

The Mystery of Irma Vep continues at the Jungle through October 19, so there really is no excuse to miss this one. Get yourself to Uptown in the next six weeks for some deliciously campy fun, and then plan to make another trip back to the Jungle later this year for On Golden Pond, starring the incomparable Wendy Lehr and the Jungle's retiring Artistic Director Bain Boehlke.