"Middle Brother" by Mu Performing Arts at the Southern Theater 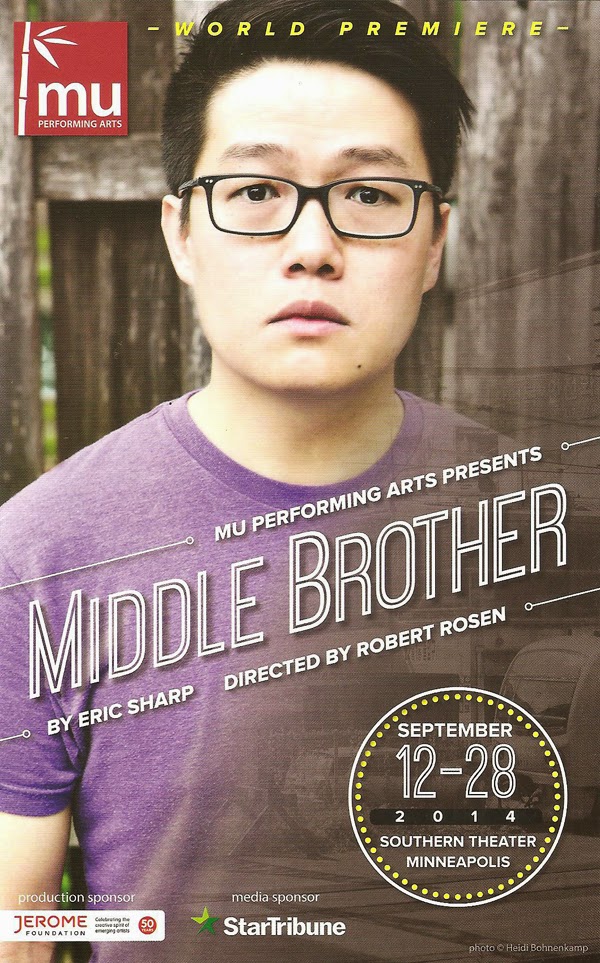 I love Mu Performing Arts' unique take on classical musicals with Asian-American casts, most recently a gorgeous production of Sondheim's A Little Night Music. But what they do best is foster and produce new work about the Asian-American experience, which is of course part of the American experience. Middle Brother, written by frequent Mu actor and their Marketing Coordinator Eric Sharp, is one such piece. Eric draws on his own experience as a Korean adoptee who returns to Korea as an adult and tells a similar story about a character named Billy in a funny, poignant, fantastical, imaginative way.

Middle Brother is not so much a linear story as a series of vignettes, dreams, scenes, and fantasies. We meet Billy as he's about to leave his home state of Iowa to visit Korea for a few months, hoping to learn more about his heritage and blend into society. Of course it's not that easy, as he finds himself not quite fitting in, a feeling with which he's familiar. In addition to Billy (played by the playwright), five actors (Audrey Park, Michael Sung-Ho, Sara Ochs, Sherwin Resurreccion, and Su-Yoon Ko) portray a sort of Greek Chorus, or in this case Korean Chorus, as well as other characters in the story. The play starts out almost interactive, with the Chorus speaking directly to the audience and defining the two worlds in a clever way. We see scenes of Billy interacting with his younger brother, also adopted from Korea but with little interest it. In Korea, he learns that he also has a biological older brother (hence the title), who he meets and begins to learn about his family. Or does he? Interspersed with these scenes are fantasy sequences about Billy being born to the royal family and he and his prince brother playing (like when Annie sings "Maybe," imagining what her biological parents were like). My linear logical brain had a bit of a hard time understanding which parts were "real" and which were "fantasy." I wanted to know what really happened to Billy, his brother, and his parents, but maybe the point is that answers in transnational adoptions aren't so easy to come by.

This piece features an inventive use of space, props, and storytelling. One large set piece dominates the space at the Southern theater, a raised platform with arches that the actors climb on and crawl under. A matching smaller piece on wheels functions as a literal bridge between the two worlds, a plane, and a hospital bed (set and props by John Francis Bueche). The recurring original song "Holy Crap, Here I Am*" sung in Korean Karaoke style expresses Billy's feelings more than mere words can.

I was surprised to read in the program that over 100,000 children have been adopted out of Korea since 1953. This play doesn't offer answers to the issues that adoptees face so much as share one person's experience. It's amusing, entertaining, and effective, if a bit difficult to understand at times for the literal minded. Playing now through September 18, with discount tickets available on Goldstar.


*Listen to Eric talk about writing the song "Holy Crap, Here I Am" on the new music-theater podcast Twin Cities Song Story.