"The Rainmaker" at Yellow Tree Theatre 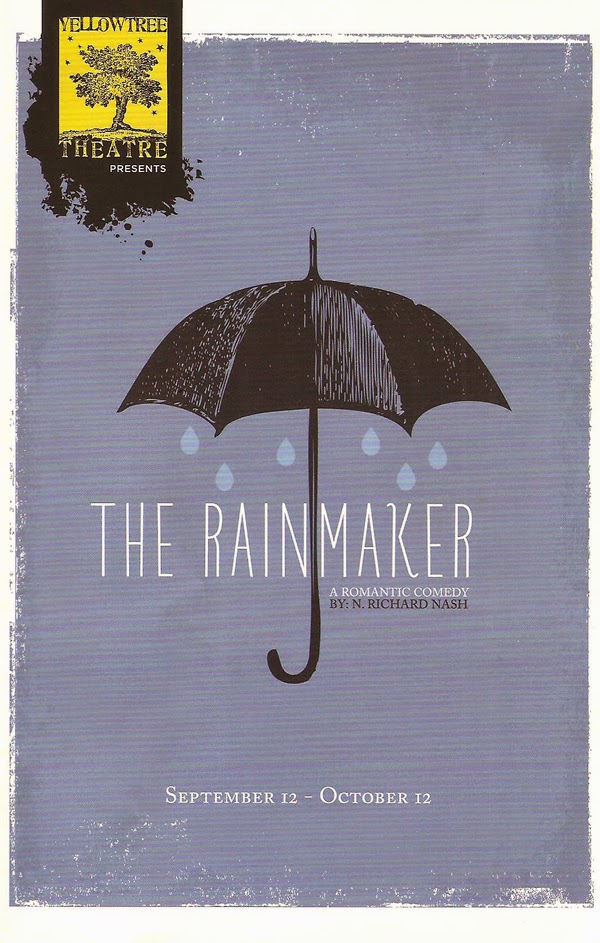 Sometimes something or someone comes along in life that changes everything. Such is Starbuck, aka The Rainmaker, to the Curry family in Depression era middle America in N. Richard Nash's play 60-year-old play. Yellow Tree Theatre is mounting a lovely new production of this play with an all-star team of YTT regulars and newcomers. It's funny and sweet, hopeful and devastating, a prime example of the beautiful theater that Yellow Tree has been doing for going on seven years, made only richer by the influx of talent from the larger Twin Cities theater scene.

The Curry family consists of patriarch H.C., smart and capable daughter Lizzie, older son Noah who runs the ranch, and the youngest, the easygoing Jimmy. The boys are worried about Lizzie's future and try to marry her off, first by sending her to a nearby town to stay with a family with six sons, then by inviting the local deputy over for dinner. But Lizzie isn't like other the other girls in town, flighty and flirty and intent on "getting a man the way he needs to get got." She speaks her mind, and thinks that no man would want her because she's always been told that she's plain. One hot, dry night, a stranger shows up and offers them something they're all craving - rain. Gullible Jimmy believes him, practical Lizzie and Noah do not, but H.C. wants to give it a chance just in the hopes of something happening.

Something does happen, maybe not what they expected, but something that changes all of their lives. Whether or not Starbuck is a rainmaker as he claims remains to be seen, but what he is is a dreamweaver, a catalyst for change to get them out of this rut they've fallen into. He's Professor Harold Hill, come to sell River City, or in this case, the Curry family, something more than a big band or rain, something much more vital - hope for the future, faith in something, and a belief in oneself. He teaches Lizzie to say "I'm pretty" and mean it, but it's not really about being "pretty," it's about believing she's a beautiful woman deserving of love and happiness and all that life has to offer. Even though the plotline about "marry her off before she becomes an old maid" could seem sexist and offensive, it's a product of its time and really represents any longed for and almost given up dream.

Ivey Award winning director Craig Johnson brings out the best in this excellent cast. When Peter Christian Hansen's Starbuck says that he can bring the rain, I believe him, so perfectly does he portray this con man's confidence and determination, but also his uncertainty and insecurity that he only reveals to Lizzie in quiet moments. I've been a Dawn Brodey fan for a few years, but this may be the best I've ever seen her - so real and raw and natural; you can read Lizzie's every thought and emotion in her facial expressions and body language. Pat O'Brien brings a warm compassion to the role of H.C., who only wants the best for his three very different children. Nathan Cousins is adorable as the simple young Jimmy, and provides much of the humor, while James Rodriguez as the pragmatic Noah is the strong center of the family who may act like a jerk sometimes but has the best of intentions. Rounding out the cast are Tim Tengblad as the friendly town Sheriff who talks Jason Peterson's reluctantly charming Deputy File into letting go of past pain and his life of solitude for something more.

Yellow Tree's intimate stage is crowded with furniture in the cozy Curry home, with an elevated part in the back as the Sheriff's office and, later, the tack room, allowing for easy and subtle transitions between scenes (scenic design by Eli Schlatter). It's so wonderful to be in that small intimate space, where you can see the expressions on the actors' faces up close and personal. There's nowhere to hide and no need to; each of them is so present in every moment, you could spend the entire show just focused on one of their faces and get a full experience of the story, although a slightly different one depending on who you chose.

This play marks the opening of Yellow Tree Theatre's 7th season in the little strip mall in Osseo. I've been with them since the 3rd season, and it's been a pleasure to watch them grow and succeed. They have a wonderful pool of talent that they regularly pull from, but to see them bring in the likes of Ivey Award winners Craig Johnson and Peter Hansen says a lot about how far they've come. I love to see the mixing and mingling of talent at theaters around town; I think it makes everyone better, as can be seen in this piece. The Rainmaker is a beautiful play and a beautiful experience at the theater. Head up to Osseo and spend some time with these warm, funny, stubborn, flawed, relatable people as someone comes into their lives and shakes things up so they'll never be the same.