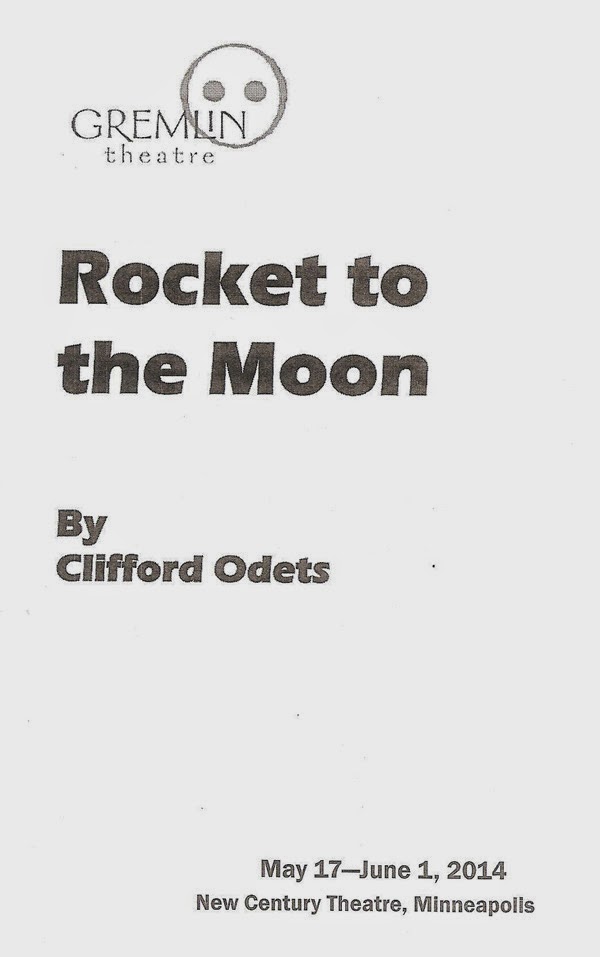 They get me every time. Gremlin Theatre, that is. I've seen everything they've done over the past couple of years and it's always been a play I've never heard of and know nothing about, a seemingly obscure little known work. And they're always just absolute gems that reach in and grab me in the heart, gut, funny bone, or all three. Their current production, Rocket to the Moon, is no exception. It's a tragic love story set in a dentist office in 1938, but it's really about a handful of complex characters that we grow to know and care about over the course of a few hours despite, or perhaps because of, their flaws, all so beautifully and vulnerably brought to life by this excellent cast.

New York City dentist Dr. Ben Stark is offered a chance to move his practice to a bigger and better location, but is talked out of it by his pragmatic wife Belle. Part of her reasoning is that the money for the move comes from her father Mr. Prince, whom she despises. Ben has no confidence or ambition, and after ten years of marriage does everything his wife tells him to. As one character says, his unhappiness has become a habit he's not even fully aware of; he's "like an iceberg, three-quarters under water." His father-in-law is his exact opposite, a man of means brimming with confidence, who knows what he wants and goes after it. He encourages Ben to do something to shake things up, maybe even have an affair with his pretty young assistant Cleo. Which he eventually does, not because "Papa" told him to, but because Cleo is as full of life as Ben is devoid of it. She has hopes and dreams and believes she will achieve something wonderful in her life, despite her unhappy home life which she continually lies about. But this is not a happily ever after kind of play; these are all sad damaged people, some of whom make choices that may move them towards happiness, and some of whom continue to be stuck.

This is such a great cast, directed by Ellen Fenster (who is also responsible for making me weep at last year's The Effect of Gamma Rays on Man-in-the-Moon Marigolds). It's truly a joy just to sit in the audience and watch them work. Peter Christian Hansen is able to reign in his usual magnetic stage presence to portray the unassuming dentist who's just going through the motions of life, emotions deeply hidden, until he begins to wake up with Cleo. Jane Froiland is effervescent as Cleo, and while I usually don't root for a man to cheat on his wife, I so wanted her and Ben to find happiness together. Ben's wife could be seen merely as the shrew who holds him back, but Daisy Macklin Skarning makes her a sympathetic character as well, a woman who's known deep grief and is surviving the only way she knows how. Craig Johnson is, as usual, an absolute delight as Mr. Prince. True he's given the best lines, speaking in unusual and descriptive metaphors, but his delivery is scrumptious. He makes Mr. Prince's offer to Cleo really quite attractive; a girl could do worse than a smooth-talking well-dressed charming older gentleman whose only goal in life is to woo her! Nicely rounding out this seven-person cast are David Coral as Ben's alcoholic partner, another sad and lost man; Jason Rojas as Ben's friend, challenging him yet protective of him; and Edwin Strout, stealing scenes as the flamboyant dance director.

I love what Gremlin has done with the New Century Theatre. The usual stage is so wide and shallow that it almost looks two-dimensional, which works for some shows but less well for others. This is definitely a piece that is more than two dimensions and needs room to breathe. Scenic and lighting designer Carl Shoenborn and his team have built out a square thrust stage with plenty of space for Ben to get as far away from his fears as possible. He's filled it with vintage office furniture and accoutrements, with evocative lighting relaying the time of day or emotion of the scene. Costumes by A. Emily Heaney add to the period feel, from Mr. Prince's smashing three-piece suits to Belle's lovely dresses and hats to Cleo's efficient uniform.

Rocket to the Moon continues at the New Century Theatre in the City Center in downtown Minneapolis through June 1, with half-price tickets available on Goldstar. This play is another one of those theatrical gems that Gremlin has plucked from obscurity and polished to it's most achingly beautiful form. It would be a shame to miss this one.