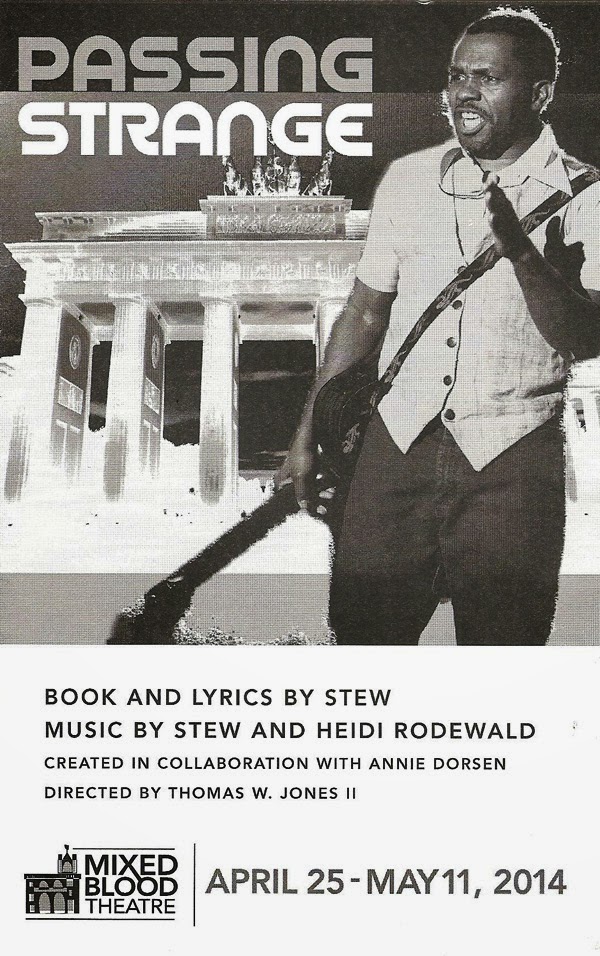 The rock musical Passing Strange was short-lived on Broadway, running just five months, but it earned seven Tony nominations and one win for Best Book. I recall hearing about it, but I never saw it. I'm so grateful to Mixed Blood Theatre for bringing it here and for assembling this talented cast and creative team, because Passing Strange is everything I want music-theater to be. It's a completely unique creation that comes from the heart, features an awesome rock score, and is wildly entertaining, poignant, funny, and relevant. Written by the musician known as Stew (with help from Heidi Rodewald on the music composition) and loosely based on his own life, Passing Strange is a coming of age story about a young black man from L.A. who travels to Europe in search of what he calls "the real." The narrator (played by Stew himself on Broadway) and his younger self take us on this epic journey with them, filled with the highs of love and music and the lows of grief and heartbreak, and it's a beautiful thing when he comes out the other end with a better understanding of life, love, and art.

Passing Strange feels more like a rock concert than a musical, with the narrator introducing himself and the band and talking directly to the audience. He doesn't pretend that he's not spinning a tale for an audience, yet at times he's deeply connected to and affected by his story as it plays out before him. We meet a nameless young man, presumably his younger self, in his too comfortable life in L.A. with his mother and the church. It's the late 1970's, and he decides to go to Europe to see who he can be, rebelling against his family and country and society. He lives a life of new friends, sex, drugs, and rock and roll, first in mellow Amsterdam and then in the intense world of Berlin. He loves art above all else, and through it strives for "the real." As he grows up and experiences loss, he learns that there might be more to life than art.

This highly energetic and talented cast and band (at times it's hard to tell the difference between the two as they're all part of the story) drive through the show like a freight train that never stops or lets up. As two sides of the same man, Anthony Manough (narrator) and Nathan Barlow (youth) are both fantastic. Anthony is a great front man, funny and entertaining and captivating, but also shows us the character's emotional side as he observes his story from the outside. I've seen Nathan Barlow in supporting roles in the past (and called him "one to watch"), but this could be his breakout performance. He gives such an emotionally and physically intense and at the same time playful performance, literally running from one end of the stage to the other, all while making this youth someone to follow and root for, despite his selfish and self-centered wanderings (not atypical for someone that age). As his (their) mother, Jamecia Bennett brings a soul to the story, not to mention her incredible voice that is a force of nature. Also fantastic and fun to watch are the trio of Brittany Bradford, Meghan Kreidler, and Lipica Shah, functioning as a sort of Greek chorus, in addition to playing various friends and girlfriends that the youth meets on his journey. Rounding out this fine cast is LeRoi James as the preacher's son choir director and various other characters.

I don't see a choreographer or movement coach listed so I don't know who to credit for this (perhaps director Thomas W. Jones II), but there is some crazy wonderful movement and dancing going on. And you can't have a great rock musical without a great rock band, and they've got that here, with direction by Jason Hansen (the go-to-guy for rock musicals in the Twin Cities, and with good reason). I enjoyed seeing Eric Mayson (from last year's really cool Fringe show Elysium Blues) playing guitar in the band, with a great turn as the preacher. And I must also mention the crazy fun 70s-ish costumes by Trevor Bowen.

And this too (from the director):

What a beautiful thing to use music-theater in that exploration. If you, like me, love the art form that is music-theater and believe that it can be more than the latest Disney movie adaptation, you owe it to yourself to go see this show. It's a unique and personal creation beautifully and powerfully brought to life by this fantastic cast. It'll make you think, feel, laugh, cry, and clap your hands. It's not often that the audience of a musical is cajoled, no demanded, to get on their feet! I guarantee you've never seen another musical like Passing Strange, which is what I love most about it. Playing now through May 11, click here to reserve tickets or take a chance and show up at the theater before the show to get a free ticket (assuming it's not sold out) as part of Mixed Blood's "Radical Hospitality" program.