"The Working Boys Band" at the History Theatre 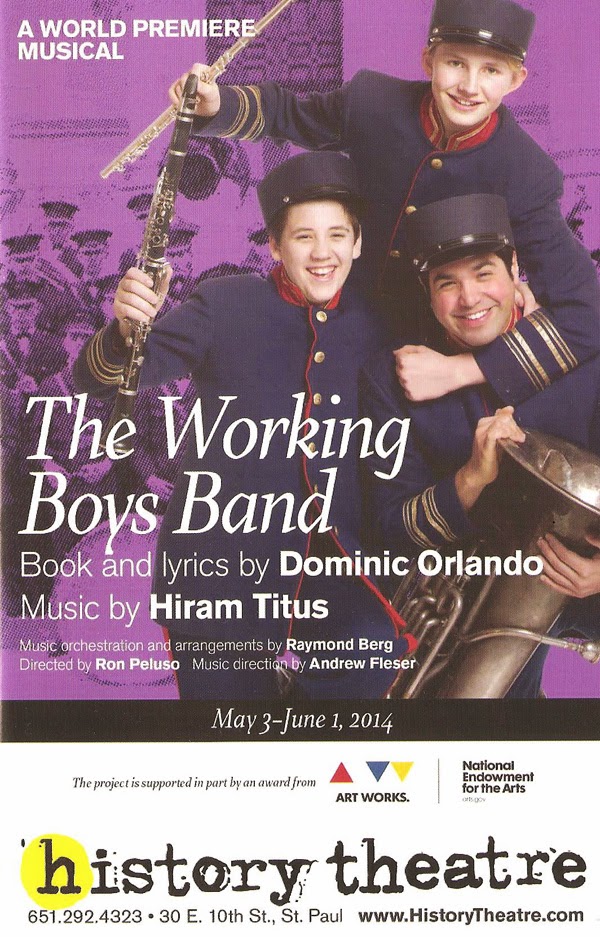 In the early 20th Century in Minneapolis, when children were forced to work long hours in factories, a marching band was formed to keep these boys off the streets and improve their lives through music and teamwork. This is a subject that is begging to be made into a musical, and the History Theatre has obliged with The Working Boys Band, directed by Ron Peluso, with book and lyrics by Dominic Orlando and music by recently deceased local composer Hiram Titus. Part Newsies, part The Music Man, and part Dead Poet's Society, The Working Boys Band isn't a particularly original musical, but it is a fun and feel-good musical about the power of music as it played out in local history.

Like Professor Harold Hill did for the people of River City, Professor C.C. Heintzman (based on a real person) gave the working boys in WWI era Minneapolis a love of music and sense of community and teamwork. In other words, "manliness, integrity, intelligence, and kindness" as the song goes. He faced obstacles - unruly boys coming late to rehearsal, 21-year-old Franky who joins the band to dodge the draft, and a community board that wants to fire him because of his German heritage - but he and the music came out on top in the end (as required in any feel-good musical such as this).

Here are a few highlights of the show:

If you're looking for a fun, feel-good musical with great performances by professionals and kids alike, look no further. The Working Boys Band is playing at the History Theatre through June 1 (discount tickets available on Goldstar).