"Some Assembly Required" by Theater Latte Da at the Lab Theater 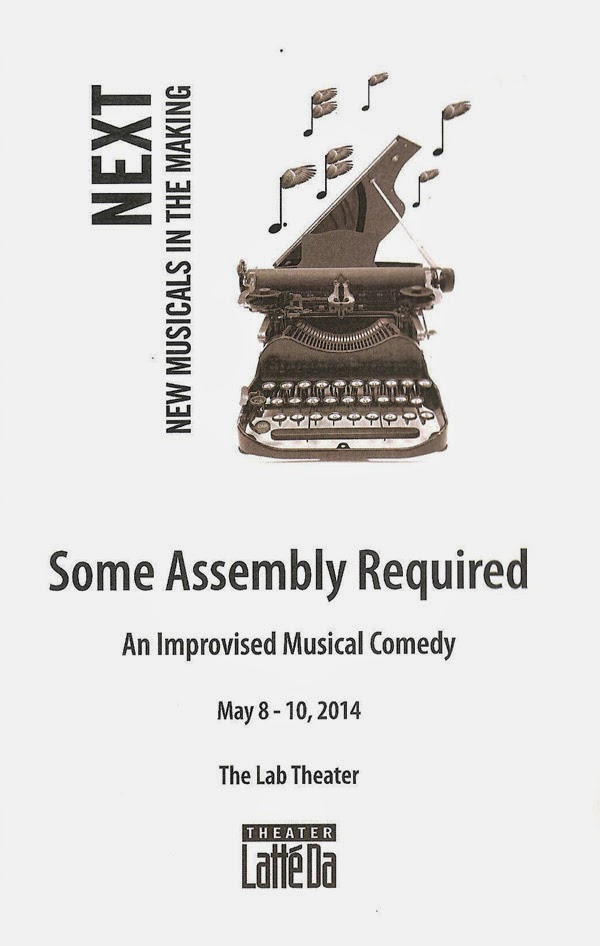 In the second production of Theater Latte Da's series NEXT: New Musicals in the Making, there is Some Assembly Required. That assembly is done in front of the audience's eyes and with their help by comedy/music/theater/improv experts Jill Bernard, Madde Gibba (who, sadly, did not perform the night I saw the show due to weather-related travel difficulties), Brian Kelly, Doug Neithercott, and Michael Ritchie, with improvised musical accompaniment by Todd Price. The result is a fun, silly, and surprisingly cohesive one-of-a-kind musical.

The show begins with a text solicited from someone in the audience. For the show I saw, this text was "do you know anyone who could sell us a used pontoon?" (only in Minnesota, right?). The cast then ran with the theme of "used pontoon," which is actually a pretty cool title of a musical. I can just see the marquee: Used Pontoon: The Musical (the ubiquitous tag added so that people don't think it's a watercraft sale). Three of the performers made up a song on the spot, ranging from sad ("I feel as useless as a used pontoon," my personal favorite)  to spirited (building an army and overthrowing a dictator on a used pontoon). The audience voted and chose the latter as the basis of the musical. And so the show begins.

The cast created scenes and characters and slowly built a plot that mostly made sense, sort of. The Russian generalissimo living in a castle tower is planning to conquer the small village lying at the foot of the tower, as a present for his wife. The scrappy townspeople gather together to find the generalissimo's weakness and stop him from destroying their little town. There are secrets, betrayals, acts of bravery, a recurring theme of earthworms, a love story, and a really awkward Dallas Buyers Club reference. All of it made up on the spot, although the cast did have time to converse and plan for Act II during the short intermission. It's really remarkable to watch them create something brand new and entertaining right before your eyes. But remember, these are professionals, don't try this at home!

One final performance of this music-theater experiment remains, which will differ slightly from the two previous performances in that they will take the best bits from each and put them together in a somewhat planned, although still improvised, musical. If you're free tonight - check it out for a one-of-a-kind music-theater experience.