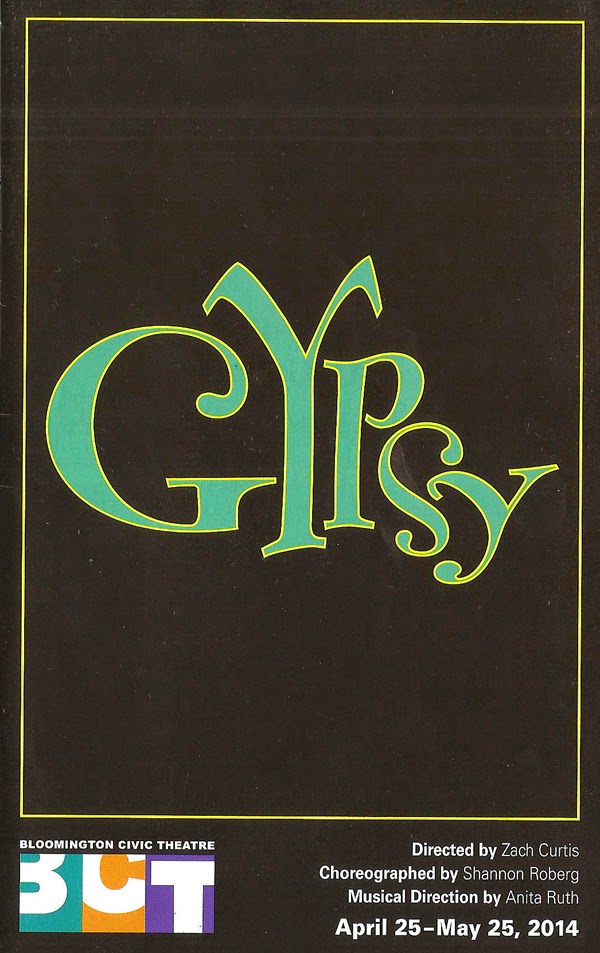 What better time to see the classic 1959 musical Gypsy than on Mother's Day weekend? Based on the memoirs of Burlesque star Gypsy Rose Lee, it features the quintessential stage mother in Rose, who puts all of her hopes and dreams into her daughters as she guides them through their Vaudeville career. There's nothing really new or noteworthy about Bloomington Civic Theatre's production, it's just a good, solid, classic interpretation of one of the best musicals ever written, full of great songs and complex characters.

We first meet Rose and her daughters Louise and June in an audition, as she famously calls out directions including "sing out, Louise!" Baby June is the star, a pretty and precocious little girl in blond ringlets, and Louise is the older and less talented daughter forced into the shadows. Rose promises her girls she will make them stars, and travels around the country getting them bigger and better gigs with the help of Herbie, their manager who's also an unofficial husband/father figure to the family. Louise and June soon outgrow the little girl act but their mother refuses to let them grow up. A teenage June runs away with one of the boys in the act to form their own act. Herbie and Louise encourage Rose to walk away and concentrate on their family, but Rose is not someone who gives up. She turns all of her focus to making Louise a star in a recycled version of the old act. But Vaudeville is dying, so the act ends up in a Burlesque theater. Rose promises that this will be the last gig and she will marry Herbie and walk away when it's over. But when given the chance to make Louise a star in the Burlesque world, she takes it, and shoves Louise into the spotlight. Surprisingly, Louise takes to this new role and shines, not needing her mother any more. In one of the most famous musical theater songs, Rose makes one final plea to the universe, asking when it will be "Rose's Turn" after all she's sacrificed.

Here are some great things about the show:

Gypsy continues at Bloomington Civic Theater through May 25 (with discount tickets on Goldstar). If you've never seen this classic on stage, this is a great production to introduce you. And even if you've seen it many times, it's still fun to revisit old favorites.

BCT has announced their 2014-2015 season and I'm super excited to see that they've chosen the brilliant new rock musical about a family dealing with mental illness, Next to Normal. I think it's great that they sometimes venture out of their comfort zone of classics that they do so well, which next season include Guys and Dolls, La Cage Aux Folles, and Carousel - one I've never seen but have been wanting to. But first - the final play this season is The Odd Couple, which I am going to see for two reasons - Sam Landman as Oscar and Wade Vaughn as Felix. Trust me, you don't want to miss these two.