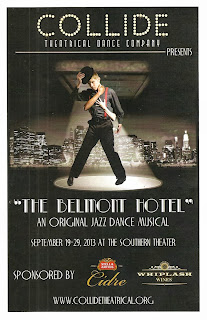 COLLIDE Theatrical Dance Company is a new company whose mission is "to create original Broadway-style jazz dance musicals that engage and entertain audiences." It's a cool concept, and for a musical theater geek like myself who doesn't know much about dance, it's a great way to experience the beauty and storytelling power of dance in an accessible and familiar format. Like a musical without words, the story and emotions of the characters are conveyed simply and powerfully through movement and physical expression. Their inaugural production Lot of Living to Do told the story of prostitutes in the '30s trying to better their lives, and their new production, The Belmont Hotel, tells of a hotel owner with a failing business in 1929 who turns to bootlegging, and the effects that has on his family. Directed and choreographed by company founder Regina Peluso and featuring a talented ensemble of dancers, a fabulous on-stage five-person band, and two fantastic singers, it's a highly entertaining evening (free drinks from sponsors Stella Artois and Whiplash Wines don't hurt either).

The story of The Belmont Hotel is fairly simple. Losing money due to the Great Depression, hotel owner Frank (a light on his feet Jeff Quast) decides to go into business with a bootlegger (a smooth and seductive Patrick Jeffrey), introduced to him by the nanny (an appealing Renee Guittar). The money starts rolling in, but his wife (director/choreographer Regina Peluso) and daughter Lily (the precocious Dora Dolphin) are not happy with the change. A crisis neatly leads to a change of heart, the family is reunited, and everyone's happy again. Let's dance!

And what dancing there is! Regina's choreography is classic and fresh at the same time, beautifully executed by the leads and ensemble. But the youngest dancer steals the show; Dora Dolphin is already a star* at a young age, and is completely charming in Lily's dance with her daddy and alone on stage in her angry neglected dance. The ensemble numbers are also a highlight, especially the Act I closing number "Feeling Good" and the final number "Sing Sing Sing," and include some pretty amazing acrobatic tricks that I wished I could rewind and watch again!

The soundtrack to the story is a selection of jazz standards like "Stormy Weather" and "Mack the Knife (with a little Beyonce and Beatles thrown in for good measure), performed by the band with vocals on some songs. Katie Gearty has a dusky voice that's perfect for these songs, and Cameron Wright has impressive vocals, most evident in an a capella unmiked version of "It Don't Mean a Thing" that fills the cavernous space of the Southern Theater stage. I'm not sure there is a better stage for dance in the Twin Cities than the Southern, with its wide open stage, gorgeous brick arch backdrop, and excellent sightlines from the audience. Costumes are period appropriate (with the exception of an inexplicable untucked plaid shirt and khaki pants ensemble) and still allow the dancers to move freely and beautifully.

This is a short run so act quickly if you want to catch this production of the new original jazz dance musical The Belmont Hotel - only four more performances remain this weekend (discount tickets available on Goldstar.com). Recommended for dance aficionados and novices alike. COLLIDE's next production is Romeo and Juliet next spring. I cannot imagine Romeo and Juliet as a jazz dance musical, but I trust this company to make it work!


*Her bio notes that Dora will be in Gypsy at BCT next spring. From what I've seen of her, she will be a perfect Baby June!