"The Laramie Project" at Lyric Arts 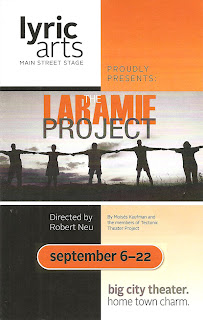 I believe in the power of theater to change the world, and The Laramie Project is a great example of that. Shortly after the brutal murder of a young gay man named Matthew Shepard in Laramie, Wyoming, a theater company led by playwright Moises Kaufman went to Laramie and conducted over 200 interviews with the townspeople. In the midst of a media frenzy, they gave these people a voice, people who knew Matthew personally during his life or were affected by his death. They listened to them and told their story, as simple and profound as that. The result is a play called The Laramie Project, compiled from interviews, company members' journal entrees, and news reports. The play is not just about Matthew's life and death, and this unspeakable hate crime that sparked a national debate, but it also examines the anatomy of a town, a town that's just like any other town in America. It doesn't offer answers or reasons why, but it sheds light on what happened, allows these people's truths to be known and heard, and begins a dialogue that may eventually lead to healing. I believe that is the best that theater can be and do. Lyric Arts' new production, beautifully directed by Robert Neu and featuring a talented cast of 12 playing over 60 roles, does this story and the project justice. It's a story that continues to need to be heard.

Rather than a reenactment of events, the play is structured as a series of monologues, taken from actual interviews with the real people of Laramie. The theater company members also serve as characters in the play and as narrators, introducing each speaker. All of these interviews put together provide a narrative of events, as well as illustrate life in Laramie, a typical American college town, before and after the tragedy. The simple and bare sloped stage with 12 chairs allows space for the story to be told, as the actors move themselves and their chairs around the space in different formations.

There's not a lot of interaction between the characters, but the play still manages to give us several fully developed characters that we begin to care about. I hesitate to call out anyone in this beautiful cast because they all do a remarkable job creating several characters each, differentiated by a scarf, hat or glasses, or the tone of voice. But if I must mention a few, I will say that I was particularly moved by Ty Hudson as the charismatic bartender and one of the last people to see Matthew alive, Beth King as the strong but sensitive police officer first called to the scene of the crime, Corey Okonek as a friendly limo driver and Matthew's father, Emily Picardi as Matthew's spunky friend turned political activist Romaine Patterson, Jarome Smith as an enthusiastic theater student who was deeply affected by Matthew's story, and Debbie Swanson as two different college professors.

My first experience with The Laramie Project was a staged reading in October of 2008, the 10th anniversary of Matthew's death, directed by Peter Rothstein and featuring T.R. Knight and a cast of local talents. Matthew's mother Judy, who has turned her personal tragedy into a career in activism and righting the wrongs that lead to Matthew's death (including the passage of The Matthew Shepard Act in 2009), was in attendance that night. So I was fully aware what a powerful and important piece of theater this is, and I couldn't be more pleased that a community theater in Anoka is tackling this project and doing such a beautiful job. With the exception of some candlelight choreography at the end that went on a bit too long for me, the whole production is extremely well-done, from the simple set to the subtle intricacies of the costume changes to the sound and lighting setting the scene.

Two quotes from the people of Laramie stick with me. One is by Romaine, who said that the people of Laramie (and, I think, this country) need to own this tragedy and not just ignore it or pretend it didn't happen. Another character said about the perpetrators, "we don't grow children like that here, but obviously we do grow children like that here." At its best, theater can give us a forum to understand and explore the most difficult and important issues of our time, and that's what this play does. I highly recommend that people get out and see this important work of theater (playing at Lyric Arts now through Sept. 22); trust me, it's worth the drive to Anoka (discount tickets available on Goldstar).