"Fool for Love" at the Jungle Theater 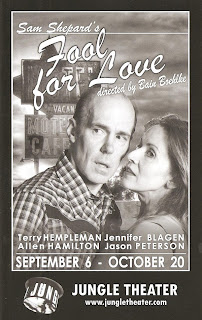 The Jungle Theater continues their excellent 2013 season, following the smart and sexy Venus in Fur, the thrilling Deathtrap, and the hilarious Urinetown with Fool for Love, an intense exploration of love, loss, and the complicated relationships of family. Written by Sam Shepard (see also True West), it's like a modern-day Western - stark and gritty and strangely beautiful. In a note in the playbill, director and set designer Bain Boehlke calls it "one of the greatest examples of theater poetry in the 20th Century," and after seeing it, that makes perfect sense. It's only an hour long (keep that in mind as you're paying your parking fee), but leaving the theater I felt like I had witnessed something epic. It's one of those theater experiences in which the world created is so real, so intense, that when the play is over, the lights come up, and you're spilled out onto the streets of the city, it's jarring. I found myself shaking my head in an attempt to readjust to my surroundings. Sitting there in the theater, the world of the play becomes the only reality, so that when it's over it's like a spell has been broken and you're not quite sure where you are or what just happened. This was perhaps the most gripping and intense hour of theater I've ever experienced.

The story centers on ex-lovers Eddie and May. After years of suffering in their tumultuous relationship, May has run away and taken up residence in a seedy motel. Eddie drives thousands of miles to find her and convince her to come back to him. She refuses, but can't bear for him to leave either. There's so much more to their relationship that unfolds over the hour. In the midst of it, May's date Martin shows up to take her to the movies, bringing the intensity to new heights. And through it all, an "old man" is sitting in a rocking chair on the side of the stage (and has in fact been sitting there since the theater doors opened), sometime telling stories, sometimes interjecting or commenting, even entering the action. There's a harsh realism to the play, even surrealism with this character who's sort of there, but not really. And there is a sort of beauty. At one point, Eddie tells a long story about a walk through town with his father in language that is beautiful, but in a stark, gritty, Larry McMurtry kind of way.

This four-person cast is totally in the moment and fully invested in their characters. Jennifer Blagen gives a fearless performance as May, swinging from one emotion to the next, about to crawl out of her skin. Terry Hempleman is intense and riveting as Eddie. Jason Peterson perfectly plays the nervousness and uncertainty of poor Martin, who doesn't know what he's gotten himself into. And Allen Hamilton is a little too creepy as that "old man" sitting just beyond the story but at the very center of it.

The set is, as per usual at the Jungle, perfection. Grimy greenish walls surround the bare space, which holds only an iron frame bed, a table with two chairs, a bare light bulb, and a ceiling fan that looks like it hasn't worked in years. Lighting (by Barry Browning) and sound (by Sean Healey) add to the atmosphere, with strange and beautiful shadows cast on walls, and a loud thunderclap perfectly choreographed to every time someone slams a door or hits a wall (which happens often). Each character's wardrobe (by Amelia Cheever) perfectly suits them, from May's too short dress, to Eddie's blue jeans and duct-taped boots, to Martin's plaid pants and bolo tie. There's great attention to detail in every aspect, which creates a very real universe in which the story takes place.

This is a play I could definitely see again; it's just so full. (If only I weren't fully booked with theater for the next several weeks.) Sharply written, wonderfully acted, with detailed perfection in all elements of the production, it's a very rich hour of theater.