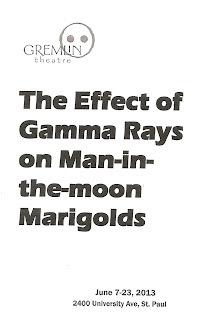 Over the last few years I've seen several gems at Gremlin Theatre (Sea Marks, After Miss Julie, A Behanding in Spokane). As of July they're moving out of their current space on University in St. Paul, and will join the other nomadic theater companies in town until they find a permanent home. Their final production in this location is the awkwardly titled 1964 play The Effect of Gamma Rays on Man-in-the-Moon Marigolds*, and this one is a heart-breaker. Like many of the plays I've seen at the Gremlin, I knew nothing about this play going into it, and that's often when I have the best experiences at the theater. With no expectations or preconceptions you can just let the story unfold purely, and as this one did I was overcome by the emotions of this beautiful and tragic story. This is another gem, friends, and if you've never experienced the Gremlin, now is a great time to start.

The play opens on the shabby and cluttered family home of Beatrice and her two teenage daughters. It doesn't take long to realize that this is a damaged family. Beatrice is a woman who has been beaten down by life, and her daughters have troubles of their own. But this is a play that doesn't spell out every detail of these characters lives and histories. The characters themselves are very well defined and complex, but their lives are loose sketches, with the audience left to fill in the gaps. Beatrice may be an alcoholic, and a hoarder, and is most certainly suffering from depression or some other mental illness. Beatrice's job, it seems, is something like an in-home hospice service, but the care she shows the elderly Nanny who lives with them is questionable. Elder daughter Ruth seems like a typical rebellious teenager, but we soon learn that suffers from an undefined mental or physical illness, which is spoken of in terms of "going crazy" or "going into it." She experiences seizures which are brutal to watch. Finally, there's Tillie, the one ray of light in this dark situation. She's a good student and loves science, despite the fact that her mom often keeps her home from school, with few friends other than her pet rabbit, Peter (played by an adorable live rabbit who's on stage for much of the evening).

Tillie's science project, "The Effect of Gamma Rays on Man-in-the-Moon Marigolds," is her sole joy, and she is chosen to compete in the science fair. Instead of being met with congratulations and enthusiasm, Tillie's mom is upset that she has to appear on stage, with everyone looking at her. Beatrice is quite a fascinating character. Most of the time she's infuriating as she belittles her daughters, but there are moments when she expresses vulnerability and sadness, and it's clear that she desperately loves her daughters. They love her too, in spite of everything, and crave her approval. They are each other's whole world, and it's a sad world. But the beautiful thing about this story is that in the midst of this hopeless situation, Tillie remains hopeful. Her mother says, "I hate the world," but remarkably Tillie loves the world, specifically the atom from which the world is built. When she talks about science, her face lights up with the beauty and wonder of it. This story had me fighting back tears for much of the evening, but in the end it's a beautiful and uplifting story.

I can't say enough about this cast. Directed by Ellen Fenster, they create a believable family of unique and complex individuals. Jodi Kellogg plays every layer of this difficult, infuriating, damaged, crazy mother and makes you feel many different emotions for her. Eleonore Dendy (of the U of M/Guthrie BFA program) is charming and spirited as Ruth. I don't know how old Donna Porfiri is, but as Nanny in the wig and make-up, hunched over a walker, she looks about 90 years old, and manages to convey Nanny's pain, frustration, and moments of relief without ever saying a word. Elise Sommers makes a brief but amusing appearance as a rival student (and looks a little too much like a young me for comfort!). Last but not least is the radiant young actor Caledonia Wilson as Tillie. She lights up when she talks to the audience about her science project, and is quiet and reflective with her family, her silence hiding a depth of emotion. If there were a Spotlight Showcase for high school non-musical theater students, she would most certainly be the star of the show.

The set is incredibly detailed, with clutter in every corner, dirty and shabby walls, newspapers over the windows, and old furniture and appliances. This looks like a house that has been lived in for years. The lighting nicely highlights Tillie's happy moments talking about science, as the room darkens and the spotlight illuminates her already shining face. (Set and lighting by Carl Schoenborn, currently appearing onstage in the Jungle's Urinetown.)

If you're looking for a light and fun night at the theater, or a bit of escapism, go see Urinetown. But if you're up for something emotionally challenging, heartfelt, and painfully real, this might be the play for you. Gamma Rays is playing for only two more weekends, and there are discount tickets on Goldstar. A mere $10 to see this talented cast in this heartbreaking and beautiful story - best theater deal in town.

*The play was made into a 1972 movie directed by Paul Newman and starring his wife, Joanne Woodward, and their daughter.