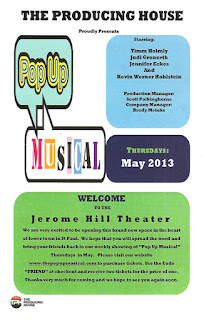 Do you remember the "Pop-Up Video" show on VH1, in which they played videos with little bubbles that "popped up" on screen displaying various trivia and facts about the video? Imagine that, but with live performers singing songs from musical theater. Such is the premise behind Pop-Up Musical, and it's a clever one. The show premiered at the Fringe Festival last year; I wanted to see it but didn't get to it, so I'm glad that they're remounting the show at the new Jerome Hill Theater in St. Paul. It's a really fun time, especially for musical theater lovers like myself. The chosen songs are well-known classics, both old and new, and the pop-up facts are alternately interesting and informative, and silly and tangential. Four talented local singer/actors perform the songs with as much enthusiasm as they hold up their signs. They are accompanied by a pretty awful and cheesy karaoke musak track, but they acknowledge that and poke fun at it. They don't take anything too seriously, and appear to be having as much fun as the audience. It's like musical theater night at the karaoke bar, except your friends are not this talented or clever (at least mine aren't).

The four performers are real-life friends who have known each other and worked together for years. (They remind me a little of the gang behind [title of show] and Now. Here. This.) Jennifer Eckes, Judi Gronseth, Timm Holmly, and Kevin Werner Hohlstein all have fabulous voices and delightfully expressive faces that say as much as the "pop-up" signs they hold up, in a tightly choreographed sort of dance as they move through the stack of posters on their music stands. Sometimes the information is factual (year of premiere, composers, Tony awards), sometimes only barely related (Kleenex is a proprietary eponym), sometimes personal (Judi is the same age as this show, Kevin slept on the street to get tickets to RENT). Everything is tongue-in-cheek, and the audience was laughing throughout the show.

Of the two dozen songs in the show, there isn't one that I didn't know, and very many of them that I know and love dearly. If someone had asked me to name my twenty favorite musical theater songs (oooh, that sounds like a great idea for a future blog post!), there would have been much overlap with this list, which includes selections from musicals as diverse as Sweet Charity, Wicked, Guys and Dolls, Avenue Q, Hair, La Cage aux Folles, and A Chorus Line. A few favorites:

I could go on and on (did I mention they sing two dozen songs in under two hours, including intermission?), but I'll leave a few surprises for you if you go see the show. And you definitely should if you're a musical theater fan who wants to hear some of your favorite songs sung by pros, learn a bit about musical theater history, and have a good laugh. The show continues Wednesdays through June, buy tickets here.

*The Producing House is also responsible for bringing us 2 Sugars, Room for Cream, Power Balladz, and Trick Boxing (now playing at the Southern Theater). I think I like them!