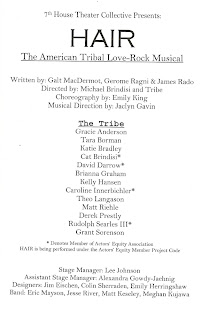 Hair is a sneaky little show (subversive, one might say). This piece that James Rado and Gerome Ragni created in the late 60s lures you in with it's happy hippie, silly and fun celebration of sex, drugs, and rock and roll, and then punches you in the gut with its serious and powerful themes of war and death and conformity. I always forget until I see it again what a remarkable thing it is that in 1968, the anti-war movement from the streets of NYC and around the country was represented on a Broadway stage, which before was relegated to more traditional musicals about things happening far away in time or space. Burning draft cards onstage in 1968 was a serious (and dangerous) artistic statement. But sadly, the idea of young people going off to war, never to return, is a concept that is not outdated. It's always a good time to put on a production of Hair in my opinion, and the talented young theater artists behind the 7th House Theater Collective agree. Theirs is a low-budget (they raised funds on Kickstarter), grass-roots, up-close-and-personal, raw and real production (perhaps similar to the first Off-Broadway production). But don't let this low-key vibe fool you, these kids have talent. And with the Chanhassen's Michael Brindisi as director, and choreographer Emily King, they have created a new interpretation of one of the most important pieces in musical theater history that's full of life and energy and raw emotion.

Hair is light on plot, but you don't need a complicated plot to have a story to tell and a truth to convey. Hair is about a "tribe" of young people living, loving, and protesting war on the streets of NYC. We follow Claude's journey as he receives his draft notice in the mail and processes it with the help of his friends (and a drug-aided hallucination), and makes a decision that affects everyone's lives. The novelty of this production is that it's done in the round in a small warehouse* in Minneapolis, with audience members sitting on couches and pillows, sometimes invited to take part. As you enter through the open garage door, actors are milling with the audience (and on a Monday night with many theater peeps in attendance, including Joseph and several of his brothers and a couple residents of Urinetown, it was difficult to tell the cast from the audience). They're dressed in modern clothes in the first act, which I was OK with, until they changed to period hippie clothes in the second act, which just felt right. The only set pieces are a couple of ladders rolled in and out as needed. The lighting is really cool, at times throwing shadows of dancing hippies up on the brick wall and huge flag, and creating a circle of light from which Claude cannot escape.

Listening to the 2009 revival cast album today, I realized they cut out a few songs and bits, and rearranged some things. But it works, there's a nice flow to the loopy ramblings of the tribe. The first act ends with the infamous nudity (tastefully and subtlety done, if there is such a thing a subtle nudity), and Claude is given a hallucinogenic drug just as the lights go down prior to intermission. The second act opens with everyone in the same position, now dressed in period hippie clothing. It's almost as if the play begins in modern times, and then they shed that modernity (literally) and everyone is transported back to the 60s in the second act with Claude's trip. Lots of bizarre things happen like in a crazy dream, including a brutal war sequence that's repeated and rewound several times, flowing through to Claude's decision to fulfill his duty.

The cast of 13 is smaller than usual (the Broadway casts have been over 20), which causes some insignificant compromises - the women burn draft cards (which doesn't make sense logically but works aesthetically) and there aren't enough women of color for "White Boys," so one of the guys joins them. But all of the major characters are covered. And most importantly, this tribe really feels like a tribe - a group of people that love and trust each other, and play and work well together. Including - Katie Bradley as the pregnant Jeannie who's hung up on Claude; a fabulous Brianna Graham as Dionne (and Abraham Lincoln); Caroline Innerbichler, a perfect choice for the sweet innocent Crissy ("Frank Mills"); Derek Prestly as my favorite character Woof (although no making out with Mick Jagger's poster); Grant Sorenson in a very funny and well-done bit as a female (?) tourist encountering the hippies; and lovely harmonies by Rudolph Searles III and Tara Borman on one of my favorite musical moments of the show, "What a Piece of Work is Man."

The heart of this piece for me is the love triangle between Claude, Berger, and Sheila, with the strongest love being between best friends Claude and Berger. The trio of Matt Riehle, David Darrow, and Cat Brindisi play it well and believably. Matt is charismatic and playful with the audience, as Berger should be, at times a lovable and loyal friend, at other times a jerk. As much as I love Gavin Creel from the 2009 Broadway revival (so much so that I made a special trip to NYC to see him and the rest of the tribe before they took the show to London, and waited outside in the freezing cold of January to meet him after the show), David's version of "The Flesh Failures" is something I've never heard before. He turns the song into a desperate cry of confusion, terror, and despair, literally beating his chest as he tries to make sense of it all. He took this song that I've heard hundreds of times before and made me hear it in a whole different way. "Silence tells me secretly... everything" gave me chills. Finally, I had this thought while I was sitting there - someday when Cat Brindisi wins her first Tony Award, I'll be sitting at home on my couch cheering her on and remembering the day I heard her sing "Easy to be Hard" in a sweaty little garage space in Minneapolis.

My first experience with Hair, the Americal Tribal Love-Rock Musical (besides that one episode of the early 90s sitcom Head of the Class), was the 2004 Michael Brindisi directed production at the Pantages, starring a hugely talented cast that are still among my favorite actors working today. Now almost ten years later, this feels like the next generation of that production. The future looks bright, and I look forward to seeing what these young artists do in the next ten years. A few tickets remain for this weekend's final performances (did I mention they're free?). Get 'em while you can. 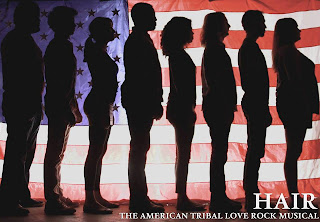 *514 Studios is a little tricky to find. It's actually on an alley parallel to Washington on the 3rd Street side, between 5th and 6th Avenues. Street parking is pretty easy to find, especially on the other side of Washington (and free after 6). The one downside of this space is that there are no concessions available. On a hot summer night, it would be nice to have a drink, which also often helps with interactive theater. ;)