"Psst!" by off-leash area at the Cowles Center 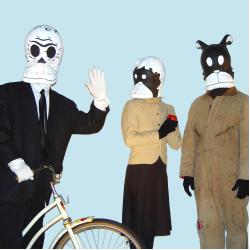 The Ivey Awards are the Twin Cities version of the Tonys. But not only do they hand out big shiny awards to certain artists, productions, or companies, they also celebrate the rich and diverse theater community in Minnesota. One performance at last year's awards show was this: "A truly bizarre and wonderful little scene from Psst! by off-leash area, a strange little workplace romance in which the actors wear not just masks, but full animal heads." This production won an Ivey Award a few year prior, and this weekend off-leash area is reviving the show at the Cowles Center for three performances only. I was lucky enough to attend opening night and experience the full show that I got a taste of last fall. It's not like most theater I attend, which I find refreshing. Psst! combines theater, dance, mask work, music, and painting to tell a story without words. It's a series of "vaudevillian vignettes," some of which are charming, some odd, some funny, some heartbreaking, some creepy, some sweet, but all of it interesting and creative.

It turns out this "strange little workplace romance" is just a part of the larger story. We follow our two main characters, identified as Janitor and Secretary (embodied by off-leash's Artistic Directors Paul Herwig and Jennifer Ilse, who also created the show), in a typical day. They wake up in the morning and get dressed just like all of us, accept that they have the over-sized heads of cartoon animals. We follow them as they travel to work (on stilts!), go about their jobs, take a lunch break, and fall in love. Their lovely frolic in the park is interrupted by Death, in a scary scull mask, who takes the secretary away. Janitor attempts to follow to the other side and bring her back, but has anyone ever been successful in that attempt, even in art?

Besides our two main characters, an ensemble of ten actors in masks populates this black and white cartoon world (the look and characters are inspired by Norwegian graphic novelist JASON). Because the actors don't have words or facial expressions to rely on, they convey emotions through deliberate, exaggerated movements. The masks (also made by Paul) are expressive but in a sort of blank way, so that they take on the emotion of the actor's body. The set pieces are charmingly simplistic, as if they've been lightly sketched on white paper (sometimes in real time). Inventive theater tricks are employed, such as thought bubbles above characters' heads with a shadow puppet representing their thoughts, and an impressively long scroll backdrop as Janitor falls into the underworld. All of these elements combine to tell a full and complete story without a single word spoken.

Psst! has two performances remaining at the Cowles Center. Check it out if you're looking for something creative, inventive, charming, and a little odd.