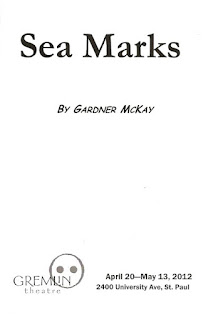 After seeing Sea Marks at the Gremlin Theatre, I had to listen to Glen Hansard on the way home, just to continue that distinctly Irish feeling of achingly beautiful pain mixed with joy that the play captures so well.  In fact I was surprised to find out that the playwright, Gardner McKay, is not Irish, but rather an American actor, artist, and writer.  I spent a week hiking around the Dingle Peninsula on the Southwest coast of Ireland several years ago, and this play brought me right back to that place.  It's a stark and beautiful land, with fierce winds, rugged cliffs, and great waves on the endless sea.  Colm, one of two characters in this play, grew up on an island referred to as "The Heads," along the western shore of Ireland.  He's rarely left the island in his lifetime, until he meets, corresponds with, and falls in love with a woman from Liverpool.  He moves there to be with her, but the call of the sea is too much to ignore.

Stacia Rice and Peter Christian Hansen (also the Artistic Director of the Gremlin) star as the unlikely lovers Timothea and Colm.  They're two of the best theater artists working in the Twin Cities today, and that's not just me speaking in hyperbole; they each have plenty of awards and accolades to prove it.  To watch them together in this intense, beautiful, sweet, awkward little dance of a play is a true pleasure.  Colm meets Timothea briefly when she visits the Heads for a relative's wedding.  During the long lonely winter, he remembers meeting her and writes her a letter.  She writes him back, despite not remembering him.  They correspond for over a year, until she returns to the island for another wedding and asks him to come back to Liverpool with her.  Timothea works in the publishing industry, and she's had segments of his poetic letters to her published as a book of sonnets.  As much as he tries to fit into her world, he never quite does.  They live in different worlds, and they can visit each other in those worlds for a time, but in the end they have to continue living their separate lives, joined only by beautiful words on the page.  This is a bittersweet love story. 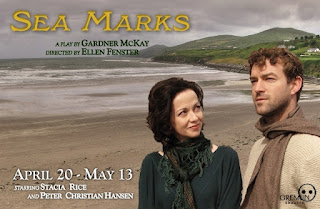 In addition to the marvelous acting, the set and costumes help to create the sense of place and define who these characters are.  As seems to be usual at the Gremlin, the set (by Carl Schoenborn) makes interesting and effective use of the vertical as well as horizontal space.  Timothea's cozy multi-level apartment is on the left of the stage, and Colm's sparse little room by the sea is on the right, with an obvious difference between the two settings.  The simple costumes (by Becki Harris) help create a sense of character, from Timothea's 50s era dresses and working woman's outfits, to Colm's sea-worn clothing and Irish "jersey."  I also enjoyed the music.  Before the show a selection of Celtic music is heard, while at intermission it switches to the more modern music of the 50s, as the action of the play leaves the timeless Irish shore for the busy modern city of Liverpool.  And the accents, to my untrained ear, are fun to listen to and further define who these people are.

A beautifully written play performed by two great actors, a simple and effective set and costumes, and a story that transports you to another time and place for a few hours - it all adds up to a lovely experience at the theater.