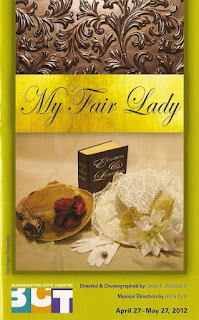 Wouldn't it be loverly? Just you wait, 'Enry 'Iggins! The rain in Spain stays mainly in the plain. I could have danced all night! On the street where you live. Get me to the church on time! I've grown accustomed to her face.

I'd forgotten how many familiar and endlessly singable songs are in the classic Lerner and Loewe musical My Fair Lady until I saw it again yesterday, at the Bloomington Civic Theatre. I've actually only seen it on stage once, well, not so much on stage as in a rehearsal room at the MN Opera Center in a beautifully sparse production by Ten Thousand Things. But that's not a fair comparison, because what Ten Thousand Things does is incomparable. The current production at BCT is the first fully staged production of this classic musical that I've seen, and they do a wonderful job with it - from the full pit orchestra conducted by Anita Ruth, to the delightful costumes and set, to the talented and spirited cast. Yes, it's a little long, with some songs going on and on, and then coming back for more, but it's thoroughly enjoyable.

I'm sure everyone's familiar with the story. And even if you think you aren't, you know it. It's been retold many times, from the original Shaw play Pygmalion, to the Julia Roberts movie Pretty Woman. A gentleman takes a lower class woman and transforms her into a "lady." In this case, the gentleman is Professor Henry Higgens, who studies phonetics and is intrigued by "flower girl" Eliza's poor accent, and makes a bet with his colleague Colonel Pickering that he can transform her into a lady in six months time. Eliza does indeed learn to be a "lady," but retains her spirit and even teaches 'Enry 'Iggens a bit about being a human being in the process.


A few highlights of the show:


BCT's musical line-up for next season looks like another good one, featuring the tap-dancing extravaganza 42nd Street, a Sondheim show I've been dying to see - Sunday in the Park with George, one of my favorite musicals - Cabaret, and Leonard Bernstein's On the Town. I think that's going to be worth the drive across town.