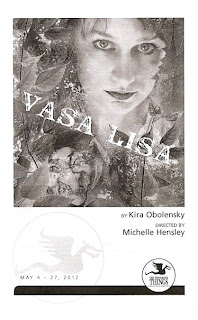 Do you know when you go to the theater (or a movie or concert) and become so engrossed in the experience, that it feels like the only reality you've ever known, for that short space of time? And then it's over, and your feet carry you out of the building and into the street, and the world seems a little different, a little strange and unfamiliar. It may take you a few minutes to snap out of it, like you're in a trance. I had such an experience upon seeing Vasa Lisa. I should be used to it by now, but it never ceases to amaze me how Ten Thousand Things can carry me away into a different time and place with just a few makeshift costumes and set pieces, and those words, lots of words truthfully and authentically spoken. This is story-telling at its best and most basic, and it feels like something we as humans have been doing for tens of thousands of years.

Vasa Lisa is a new play by Kira Obolensky based on the Russian fairy tale Vasilisa the Beautiful, directed by Artistic Director Michelle Hensley. The title character is a young woman whose mother has died and left her with a little doll to help her. She goes through many trials and tribulations because of her drunkard father, evil stepmother (is there any other kind in fairy tales?), and the village witch who reportedly eats people! She only wants to have enough bread to eat, and to see her mother again, and ends up learning that the little doll who helps her is the truest, wisest part of herself. This all sounds very trite and and simple, but the way it unfolds is wondrous in the hands of the talented artists of Ten Thousand Things. Tracey Maloney makes Vasa Lisa very relatable, real, and sympathetic. The other four members of the cast play various human and animal roles to hilarious and delightful effect. The incomparable Sally Wingert is equally good as Vasa Lisa's beloved mother, the voice of the doll (sitting just two seats away from me), and the witch. Frequent TTT player Elise Langer is the hilariously annoying stepsister, a hungry cat, and everything in between. The two clowns from the Guthrie's sharp and silly production of 39 Steps are reunited here - Jim Lichtsheidl and Luverne Seifert. Both of them are so talented at creating multiple distinct characters, and so entertaining to watch. It's really a pleasure to watch the entire cast play together.

As usual, everything about the production is sparse but effective, proving you don't need a lot of fancy tricks to create a fantasy world. (For those of you unfamiliar with Ten Thousand Things, they take their shows on the road to such unconventional places as prisons and homeless shelters, and their paid public performances share the same full lights and minimal sets and costumes.) The few set pieces are really cool, intricate, and functional pieces of art (created by Irve Dell). Peter Vitale once again provides an expressive soundtrack, which includes a few little songs sung by the characters in a natural and unintrusive way. This time he has a few musicians to help him, creating a fuller sound.

I often get more out of the children's stories at my church than the sermons for adults, and that's how I felt seeing this show. There were several children in the audience who seemed just as captivated as I was by this story. It's delightful and joyous and wondrous. This final show of Ten Thousand Thing's 2011-2012 season runs for runs for one more weekend. And their newly announced 2012-2013 season looks just as exciting as this one has been - Shakespeare's Measure for Measure, a "hip hop retelling of Aeschulus' The Seven Against Thebes" (say what?), and the American classic A Streetcar Named Desire with a non-traditional cast (which is sure to be better than the version currently running on Broadway). I know I've said this before, but you really can't call yourself a Twin Cities theater fan if you've never experienced Ten Thousand Things.