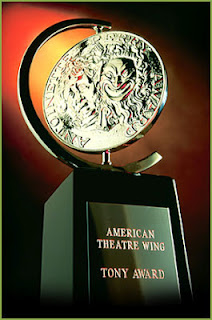 The 2012 Tony Award Nominations were announced on May 1. I have a few opinions about who I'd like to see take home the trophies since I've seen five of the eligible shows on my trips to NYC last fall and this spring (plus one right here in Minneapolis!):
Here are the nominations along with a few thoughts about the nominees (update: winners are bolded).

I almost saw Venis in Fur this spring, but unfortunately I didn't quite get there. So I can't really comment on this category, other than I look forward to seeing the first two shows at the Guthrie next season (I just renewed my subscription).

First, let me express my sadness that three of these "new musicals" are movie adaptations, and the fourth is a new story with no original music (Nice Work If You Can Get It features the music of George and Ira Gershwin). Such is the state of Broadway today - very few new original musicals (fortunately they still exist Off-Broadway). That being said, I saw Once and loved it, and would be happy to see it win. Yes it's the dreaded movie adaptation, but it's a quiet, simple movie about music that lends itself well to the stage. They were able to stay true to the spirit of this lovely story and music, while making it an entirely (well, mostly) new creation.

I was interested in seeing Death of a Salesman because of its star (more about him later), but musicals always call to me more than plays when I have a limited time in NYC. So I can't really comment on this (other than I'm pleased to see that the unintentionally comedic production of A Streetcar Named Desire did not receive a nomination).

I was lucky enough to see both Follies and The Gershwin's Porgy and Bess, and both are spectacular revivals. Follies, by the great Stephen Sondheim, was first on Broadway in 1971, and this revival is a gorgeous production (after a limited run on Broadway, it's currently playing in L.A.), featuring beautiful music, an amazing cast of Broadway vets, and fantastic costumes.  Porgy and Bess is a new version of the classic 1935 opera, a gripping story about the African-American residents of fictional "Catfish Row" in South Carolina. If I had to choose between these two, I'd choose Porgy and Bess, but possibly only because it's fresher in my mind.

Once again I'd vote for Once, the only one I saw. But really, Irish playwright Enda Walsh did a wonderful job of filling in the sparse movie and making it into a full-length musical. While I might have preferred the simplicity and subtlety of the film, I recognize that that kind of silence doesn't translate well to the stage, and I'm not sure it could have been done better.

I haven't heard any of these scores so I can't comment, other than it's interesting to note that the latter two are classified as plays with music, rather than musicals. And I'm surprised that Newsies qualifies as "original" score since it features music from the movie, but I guess they included enough original songs to qualify.

Again, I haven't seen any of these performances so I can't comment, other than to say that Philip Seymour Hoffman is one of my favorite movie actors who also happens to be an accomplished theater actor (this is his third Tony nominations), so I wouldn't mind seeing him win.

Best Performance by an Actress in a Leading Role in a Play
Nina Arianda, Venus in Fur
Tracie Bennett, End of the Rainbow
Stockard Channing, Other Desert Cities
Linda Lavin, The Lyons
Cynthia Nixon, Wit

I think Tracie Bennett is the surest bet to win a Tony this year. Granted I haven't seen any of the other performances, but her portrayal of the great Judy Garland in End of the Rainbow is genius. And I don't know how the Tony voters could resist giving the award to the woman who brought this icon to life. I heard Tracie speak in a post-show discussion at the Guthrie, and she's been very involved in the creation of this piece and this character for ten years, so it would be nice to see that sort of passion and dedication rewarded.

Oh, this is a tough one! I've seen four of these performances, and heard nothing but rave reviews for the one I haven't seen. Ron and Danny were both wonderful in Follies, but of the two Danny is my favorite (I also saw him a few years ago singing "Nothing Like a Dame" in South Pacific at Lincoln Center). Steve is also wonderful, bringing a quietness and depth to his role of that guy in Once (even if, or maybe because, he's so different from my darling Glen). But if forced to choose, I'd give the Tony to Norm Lewis, who so completely embodied (physically and emotionally) the "crippled," big-hearted Porgy.

Best Performance by an Actress in a Leading Role in a Musical
Jan Maxwell, Follies
Audra McDonald, The Gershwins’ Porgy and Bess
Cristin Milioti, Once
Kelli O’Hara, Nice Work If You Can Get It
Laura Osnes, Bonnie & Clyde

First of all - no Bernadette? But aside from that, I have to go with Audra, because she's Audra, and her Bess is so complex and layered, sympathetic while making mistakes. And that voice, come on! Let's just give her her fifth Tony.  (And a big congratulations to Minnesota's own Laura Osnes on her first Tony nomination and her successful Broadway career!)

Best Performance by an Actor in a Featured Role in a Play
Christian Borle, Peter and the Starcatcher
Michael Cumpsty, End of the Rainbow
Tom Edden, One Man, Two Guvnors
Andrew Garfield, Arthur Miller’s Death of a Salesman
Jeremy Shamos, Clybourne Park

I've only seen one of these performances, but Michael Cumpsty is sweet and charming as Judy's pianist in End of the Rainbow, who tries to save her from herself, so I'll go with him.

Can I write in Joshua Henry in Porgy and Bess? No? Then I'll vote for David Alan Grier, who is pretty spectacular too. Oh wait, Phillip Boykin is so imposing as the evil Crown that he received a few boos at the curtain call, which prompted him to smile and curtsy. He was super sweet and friendly at the stage door, so unlike his character. I change my vote to Phillip.

Best Performance by an Actress in a Featured Role in a Musical
Elizabeth A. Davis, Once
Jayne Houdyshell, Follies
Judy Kaye, Nice Work If You Can Get It
Jessie Mueller, On A Clear Day You Can See Forever
Da’Vine Joy Randolph, Ghost the Musical

The Follies cast included so many amazing veteran Broadway actresses in featured roles, each getting the chance to sing one fabulous song, that I'd give the award to Jayne Houdyshell's "Broadway Baby" as a representative of them all.

Let's give it to Once's Irish pub. Other than the fact that they don't serve Guinness, it feels like an inviting place to have a pint, listen to some music, and watch this lovely story unfold.

Best Costume Design of a Musical
Gregg Barnes, Follies
ESosa, The Gershwins’ Porgy and Bess
Eiko Ishioka, Spider-Man Turn Off The Dark
Martin Pakledinaz, Nice Work If You Can Get It

For the amazing headdresses alone, Follies deserves the Tony. Not to mention the costumes of the Follies girls, the party-goers, and the slightly faded clothing of the past versions of the characters that haunt the place.

I usually don't really notice lighting, but in this case, I think the lighting in Follies plays a pivotal role in differentiating the past and present, both of which appear onstage at the same time. It's like you're watching a living memory, in addition to the very real present.

Best Sound Design of a Musical
Acme Sound Partners, The Gershwins’ Porgy and Bess
Clive Goodwin, Once
Kai Harada, Follies
Brian Ronan, Nice Work If You Can Get It

Again, not something I usually pay attention to (maybe this is one of those things one only notices when it's bad, not when it's good), but the sound design of Follies also helped differentiate the past from the present characters. Just a slightly muffled quality that hinted you were hearing echos of the past.

Best Choreography
Rob Ashford, Evita
Christopher Gattelli, Newsies
Steven Hoggett, Once
Kathleen Marshall, Nice Work If You Can Get It

I realize this isn't really fair because I only saw one of the nominees (again), but the choreography in Once is so different from a typical musical: graceful, organic movements, rather than show-stopping numbers, that incorporate even the scene changes.

Best Direction of a Musical
Jeff Calhoun, Newsies
Kathleen Marshall, Nice Work If You Can Get It
Diane Paulus, The Gershwins’ Porgy and Bess
John Tiffany, Once

I'm going to give my vote to Diane Paulus for Porgy and Bess; she brought this classic to life in a fresh way. It's unbelievable to think that this piece was written over 75 years ago, and is still so real and moving.

Best Orchestrations
William David Brohn and Christopher Jahnke, The Gershwins’ Porgy and Bess
Bill Elliott, Nice Work If You Can Get It
Martin Lowe, Once
Danny Troob, Newsies

I was lucky enough to sit three rows behind the pit orchestra at Porgy and Bess (thanks TKTS!), and the sound was so lush and gorgeous, full and rich. Everything musical theater music should be.

That's it! Please let me know your thoughts. I'll be back to update once the awards are presented on June 10. But I won't be watching live as I have theater tickets that night. What better way to celebrate theater than to go to a show?!