"The Underpants" at Theatre in the Round 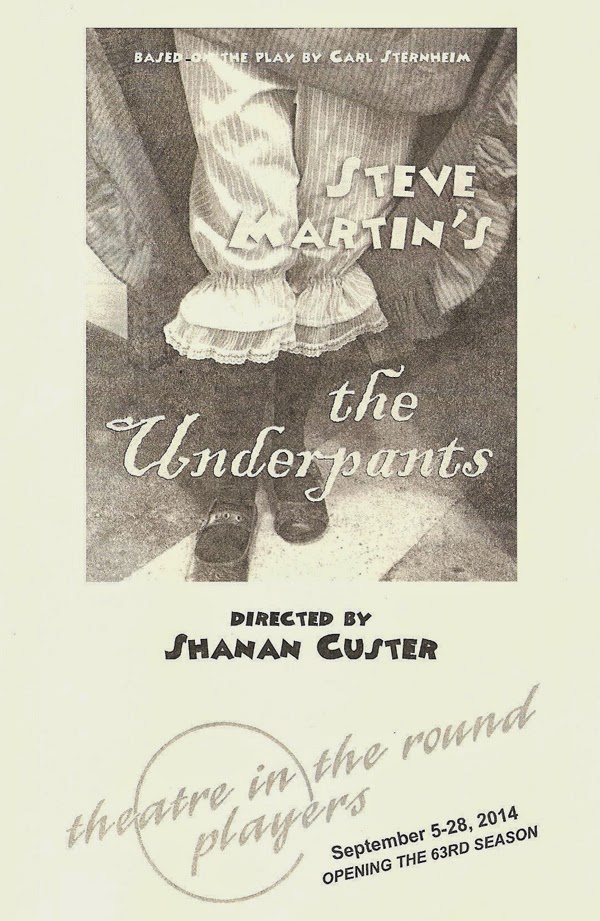 A German farce adapted by legendary funny man Steve Martin and directed by our own funny woman Shanan Custer? Count me in! This combination promises much hilarity, and Theatre in the Round's production of The Underpants delivers solidly on that promise. This brisk 90 minutes of crazy hijinks that ensue after a woman's underpants fall to her ankles in public is actually quite a brilliant satire of societal gender norms and sexual mores of the time; Carl Sternheim's script was banned shortly after it premiered in 1910. The six-person cast is excellent in line delivery and physical flourishes. Shanan's zany and flustered yet real and grounded comedy style is all over this piece, and makes for a highly entertaining afternoon (or evening) at the theater.

Louise Maske is innocently watching the King's parade when, by some fluke, her underpants (or what we might today call bloomers) fall to her ankles. It causes quite a stir in the town, and her husband Theo much embarrassment. He's a respected clerk of the King, he can't have people looking at him and thinking about what's under his wife's skirt! Two men who saw the underpants incident are completely taken by it, and decide to rent a room in the Maske home. A gentleman poet by the name of Versati falls instantly in love, and Louise, with the help of upstairs neighbor Gertrude, decides to have an affair with him. Unfortunately he's more in love with love and poetry than he is with Louise. The sickly barber Cohen loves Louise too, and blissfully unaware Theo takes him under his wing, vowing to fatten him up and return him to health. When a stern and stooped older gentleman named Klinglehoff also wants to rent a room, Louise assumes he's after the same thing. Finally even the King stops by to pay a visit. The underpants have caused quite a stir in the Maskes' life.

The show is perfectly cast, with each member bringing life to their character and the fast and funny dialogue: John T. Zeiler reveling in the selfish and sexist husband, Amy Pirkl charming and likeable as the bored wife looking for more, Jean Wolff stealing scenes as the nosy neighbor, Nic Delcambre polished and smooth as the flowerly and elegant Versati, David Schlosser adorably awkward as the nebbishy Cohen, and Eric Marinus Nelson with brief hilarious entrances as Klinglehoff. As usual, great use is made of the round stage space with seats on all sides, not a bad view among them. The floor is checkered with dingy red and white tiles (reminding me of the kitchen at my Grandpa's old farmhouse) spiraling to the center, with vintage kitchen equipment along one side and a few benches and chairs around the circle (set design by Gabriel Gomez).

The Underpants is the first show in Theatre in the Round's 63rd season (BTW they're the oldest theater company in town), and continues weekends through the end of the month. Check it out for a sharp, fun, witty, wacky romp.