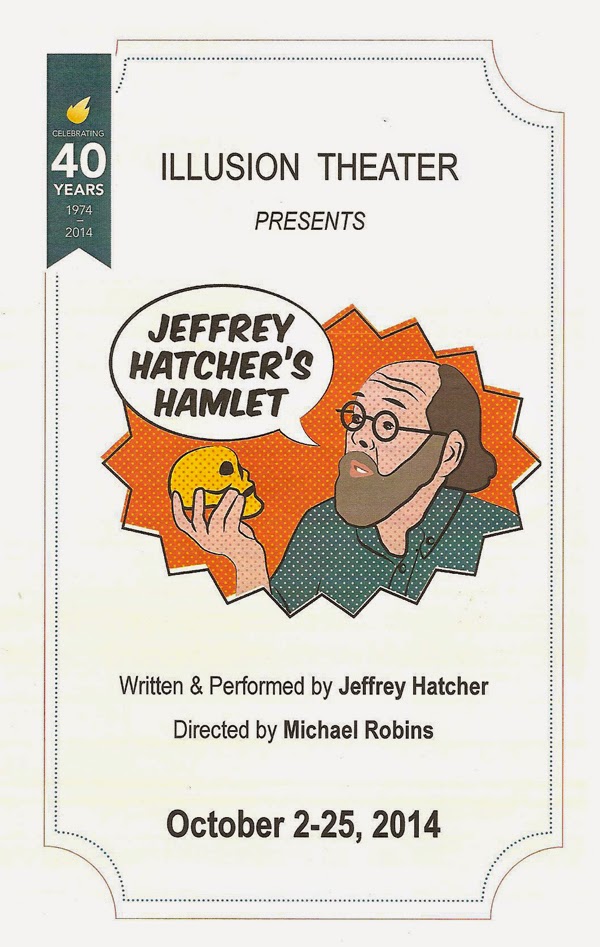 Jeffrey Hatcher's Hamlet is not a one-man show of Shakespeare's Hamlet, starring one of Minnesota's best and most prolific playwrights. Rather it is said playwright's story about when he adapted Hamlet (with the help of an issue of Classics Illustrated, a comic book series that adapted classic works of literature into comic books) into a one hour play for his 5th grade class in the late '60s. The result is a funny, entertaining, relatable story about elementary school and its strange politics, as well as a glimpse into a young future playwright's mind.

You may know Jeffrey Hatcher as the author of such locally produced plays as Compleat Female Stage Beauty or Turn of the Screw, or the films Stage Beauty or the upcoming Mr. Holmes (in which Ian McKellan plays an aging Sherlock). But in the late '60s he was a precocious and somewhat nerdy 5th grader in Steubenville, Ohio (which he later used as a setting for several of his plays). A series of coincidences prompted him to suggest to his teacher that their class do Hamlet for their annual play, to which she agreed on the condition that he adapt and direct it. And so a playwright was born. Over the course of about 80 minutes and with great detail and enthusiasm, Jeffrey recounts the entire month long episode of adapting, casting, rehearsing, and performing the play. We learn about his classmates, and why each was perfectly suited for their role. We learn about the young playwright/director's struggles with crises including his leading lady losing her voice, and just what exactly is an arras and how can it be represented in a classroom? We also learn a bit about his relationship with his parents and what it was a like to be a kid in America at that time.

Walking into the Illusion Theater I was a bit taken aback. Set designer Dean Holzman and crew have built a stage over what is usually the front section of seats, on which a detailed vintage classroom is constructed. The desks open up to reveal neat tricks and props, including what look like vintage toys and books that must have been dug out of attics or bought on ebay. On the blackboard is projected a series of images of the places and people discussed in the play. It feels a little like sitting with Jeffrey in his living room, looking through old yearbooks and photo albums as he describes what is obviously an important moment in his past.

Jeffrey Hatcher's Hamlet is not some dry lecture on Shakespeare, it's a celebration of the love of drama, and a nostalgic look at growing up in the '60s, as well as at that time in your youth when school is your entire universe, and your only worries involve the class project and the classmate you have a crush on or a vendetta against. Playing through October 25, Jeffrey Hatcher's Hamlet is a great way to open Illusion Theater's 40th anniversary season. Illusion's Producing Directors Michael Robins and Bonnie Morris just won the Ivey Lifetime Achievement Award, a deserving tribute to the great work they do at Illusion, so this is a great time to pay a visit to their lovely theater on the 8th floor of the Hennepin Center for the Arts. (Check out the great ticket deals available on Goldstar.)