"Romeo and Juliet" by Ten Thousand Things at Open Book 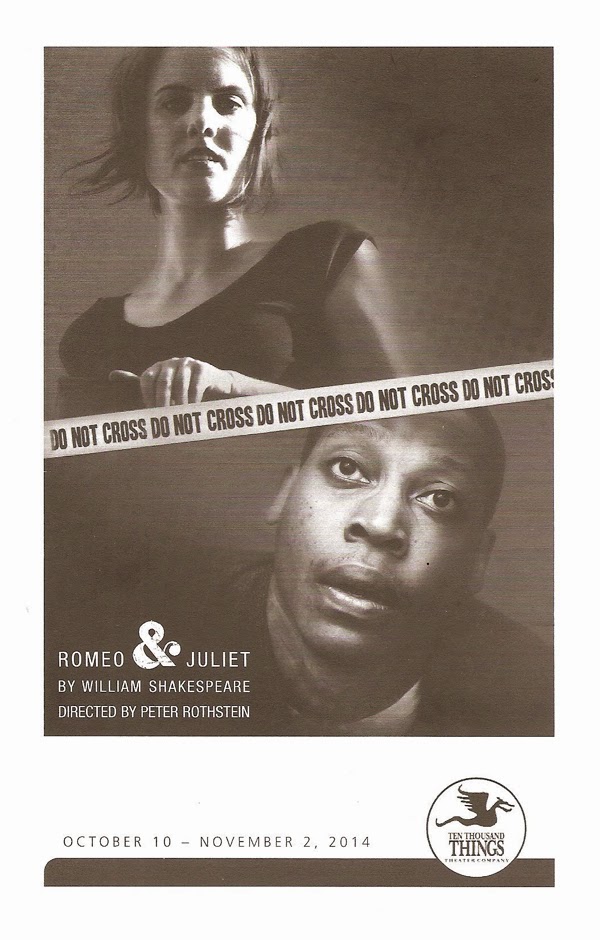 No one does Shakespeare like Ten Thousand Things. They manage to boil the text down to its bare essentials, and convey the heart of the story in a way that feels fresh and modern. This season they bring their unique Shakespeare style to perhaps his most well-know play, the story of star-crossed lovers that inspired all others, Romeo and Juliet. In the typically minimalist production (since TTT performs on location at prisons, homeless shelters, and community centers, the paid public performances are also in a small, fully lit room with little in the way of sets and costumes), director Peter Rothstein and his fantastic cast of eight playing multiple characters bring this familiar story to life in a unique way.

You all know the story so I won't recount it here. Several scenes stand out in this production. The party scene where Romeo and Juliet first meet is nicely done in the small space, with the cast dancing around the audience. The balcony scene is sweet and charming (how do you create a small and easily portable balcony? with a chair on top of a table). The fight scenes are dynamic (choreographed by Annie Enneking), made all the more real because of the close proximity and the perceived danger of an injured party falling into the front row of the audience. The final death scene is beautiful and heartbreaking.

As the titular lovers, Namir Smallwood and Anna Sundberg are a compelling pair. Namir gives Romeo a passion and single-mindedness in being with his love, and Anna portrays Juliet as a modern young woman, speaking the Shakespearean language naturally. Six other actors portray all of the characters necessary in this stripped down version. Regina Marie Williams is Juliet's somewhat flighty mother, in contrast to her portrayal of the stern-faced Prince. Bob Davis expresses Juliet's father's love for her, and frustration when she doesn't do his bidding. Karen Wiese-Thompson is entertaining as always as the comic relief nurse, the apothecary, and a mustachioed servant. Dennis Spears is always interesting to watch, and here plays the helpful Friar and Juliet's slain kinsman. David Darrow makes his TTT debut, nicely differentiating the young rebel Mercutio from the nerdy Paris (both with great death scenes). Kurt Kwan is Romeo's sturdy friend Benvolio and a blustering servant.

As always, Peter Vitale has created a soundtrack that sets the mood for the story, whether a party scene or a fight, with help from Jason Hansen on multiple instruments. Boxy black and metal stools and tables are the only set pieces, cleverly arranged as mentioned above to create the balcony, as well as Juliet's bed and tomb (designed by Erica Zaffarano). Trevor Bowen's costumes are modern yet classic, with touches of red for the Capulets and purple for the Montagues, with lovely youthful dresses over leggings for Juliet.

Every time I see Romeo and Juliet I think, why doesn't Juliet just run away with Romeo when he's banished? Why doesn't the stupid Friar get the message to Romeo? Why doesn't Romeo wait a moment longer before taking the poison? But to great frustration, it never changes. Another thing that never changes is Ten Thousand Things' high quality budget productions. The absence of the usual bells and whistles of theater allows the acting and the story to shine.

Romeo and Juliet plays through November 2 at Open Book and the MN Opera Center. With a loyal audience and small performance spaces, shows have a tendency to sell out, so you'll want to order tickets in advance.