"Ring of Fire" at Plymouth Playhouse 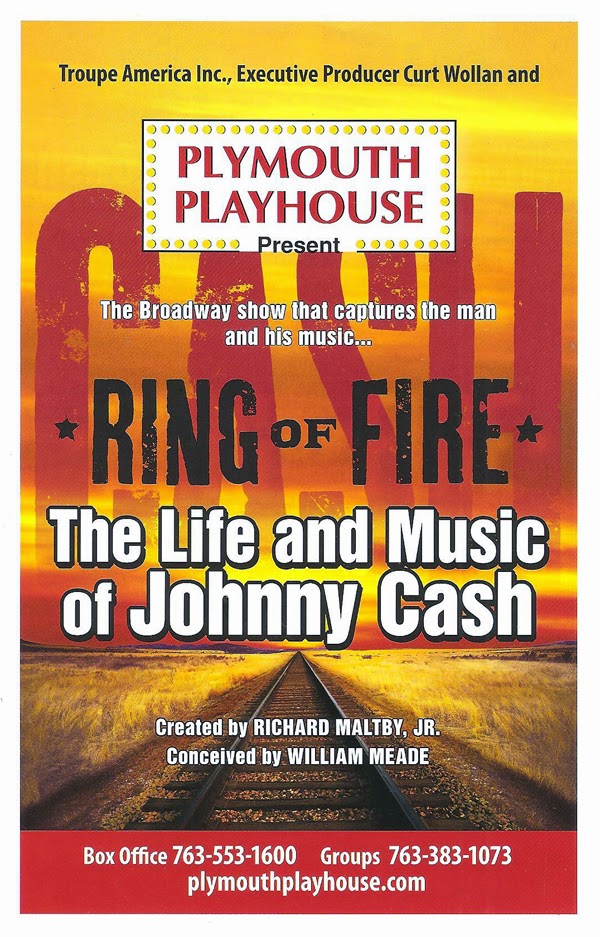 "Hello, I'm Johnny Cash." This is how the country legend began all of his concerts, and it's also how the jukebox musical based on his life begins, as all eight members of the ensemble repeat this line. Ring of Fire loosely tells the story of his life, with the ensemble taking turns as the voice of Johnny, interspersed with over two dozen of his songs and other country classics. I grew up listening to country music (my dad is the biggest Johnny Cash fan I know); other families went to Disneyland on vacation, we went to Nashville, the Grand Ole Opry, and Dollywood. I'm not such a fan of current country music (preferring the folk/Americana genre), but I still love that old time country sound. Ring of Fire taps into that nostalgic love of old time country and features a fantastic cast of talented vocalists and multi-instrumentalists. I'm not sure I learned anything new about Johnny (except for his Scottish heritage), but it's a wonderful celebration of the Man in Black and his music.

Ring of Fire played briefly on Broadway in 2006 but it didn't last long. That's not too surprising; it feels like a show that's more suited to smaller theaters across the country than a big Broadway stage. It's been playing at Plymouth Playhouse all summer, returning after a successful run last year. This was my first trip to the Playhouse, and despite the somewhat odd entrance through a hotel, once you get into the basement theater it's a cozy and intimate little space, perfect for this show. Half of the cast were in the National Tour, and the experience and familiarity with the music and the subject are evident. In this show there is no differentiation between band, singers, and actors. All eight cast members play at least one instrument, most of them several. And they all sing and take turns playing Johnny, June, and members of their family. It's well constructed into four sections, with Johnny's songs appropriately chosen to match the mood of the story. We don't really get a lot of details, his first marriage and children and are glossed over, and how he made the transition from farm boy to country music star to drug addict to religious devotion is never really explained. But through the music and a few key points in his life, we get a picture of the man. Johnny's "Boyhood Years" are marked by hard work on the farm, a close-knit family, and the death of his brother. During "Opry and Fame," Johnny meets June and performs on the Opry stage, "Dark Years" touches on his drug use and prison records, which somehow morphs into "Redemption and Celebration." Along the way we hear many of Johnny's hits, including "Flesh and Blood," "Daddy Sang Bass," " Cry, Cry, Cry," "Get Rhythm," "Folsom Prison Blues," "I Walk the Line," and "A Boy Named Sue."

I was impressed with the terrific musicality displayed by this cast, as they smoothly make the transition between instruments, and from lead to back-up vocals, trading the spotlight fairly equally among the eight. They play over a dozen instruments: drumset, washboard, acoustic and electric guitar, upright bass, banjo, fiddle, mandolin, ukelele, accordion, dobro, autoharp, piano, and spoons. The entertaining ensemble currently includes Andy Carroll (bass), Dorian Chalmers (with a fantastic full-throated voice), Jacob Aaron Cullum (a charming young Johnny, with a pretty voice), Tim Drake (on drums, washboard, and more), Candice Lively (a lovely voice), Charlotte Matis (a mean fiddler), Chad Willow (the piano man with a deep voice), and Chet Wollan (with a great smile and an appealing tenor voice).

The Plymouth Playhouse stage is fairly wide and shallow, with about a half-dozen or so long rows (with ample leg room) in a soft curve around it. At the center of the stage is a rotating sloped circle which is not overused, but adds interest to the staging. At the edges of the seat are placed some barrels and crates to lend that authentic country feel. The costumes also do that, with Western shirts, fringed skirts, cowboy hats, and of course - plenty of black (set by Susan Holgersson and costumes by Katrina Benedict).

Johnny Cash and classic country fans are sure to enjoy this show. Ring of Fire continues through November 23 so you have about another month to catch it. Up next at the Playhouse is the holiday show The Alley Cats in A Doo-Wop Christmas, followed next year year by Pop-Up Musical, which I saw last summer and is a must-see for musical theater fans.

I'm so glad I finally made it out to the Plymouth Playhouse. They put on some great entertainment, and I look forward to seeing more there in the future.