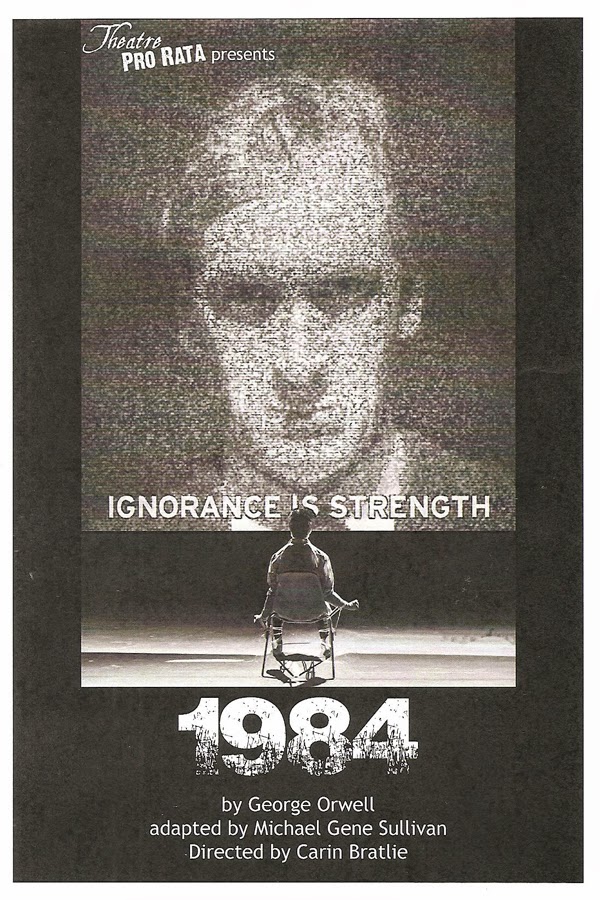 "Big Brother is watching." We're now 30 years beyond the dystopian world imagined by George Orwell in his novel 1984, and its themes have become eerily familiar and not too far outside of our current reality. Written over 60 years ago, 1984 predicts a world where the government controls what information the public receives, and knows our every thought and action. This adaptation by Michael Gene Sullivan focuses on the interrogation of "thought criminal" Winston Smith, and this well-done production by Theatre Pro Rata makes for a gripping and squirm-inducing evening.

Entering the theater at Intermedia Arts, the audience is immediately thrown into the world of 1984. On a bare stage, a man is handcuffed and curled up inside a square on the floor. A recording warns us, "system observers are prohibited from interacting with the subject." The play begins when the interrogators come on stage and jarringly shut off the house lights. The main interrogator is at first only heard, as he instructs the man known as 6709 Smith to confess his crimes. The four "party members" act out scenes from his life as he recounts them. Smith works for the Ministry of Truth, and his job is to change past documents to match the current party line. He's secretly disgruntled with the party, led by someone called Big Brother who may or may not be real, and longs to join the resistance, known as the brotherhood. He meets a woman who feels the same way and they embark on a clandestine affair, trying to hide from the telescreens that are in every home and workplace, observing and recording everything that happens. He is eventually captured, along with his incriminating diary and a book about the brotherhood. The goal of the interrogation is to break him of his "thought crimes" and restore in him a believe that Big Brother is right and good. When the torture moves past electrical shocks into making real his worst nightmare (involving rats, the most squirm-inducing moment), Smith is broken. Big Brother wins again.

The story plays out in reenactments, as Smith is forced to watch the highs and lows of his recent life as he recounts them. At times he participates in the scenes (although never leaving his square on the floor), at other times his role is taken over by one of the party members, some of whom seem to get caught up in the story they're telling, others of whom are increasingly angry at having to take part. It's a clever and effective storytelling device that not only conveys the facts of the story (or at least as Smith remembers them), but also gives us more insight into the main character and the nameless characters who play the roles.

Impressively, Grant Henderson as Smith never leaves the stage, or his shackles, from before the show, through intermission, to curtain call. He takes Smith from a man who's upset but strong enough to fight back, through the devastation of betrayal, to something so broken it's difficult to watch. As the voice of the interrogator, John Middleton is eerily calm and insistent, and later shows up in person to give an even greater presence to this cold and relentless embodiment of evil. As the unnamed party members, Brian Columbus, Emily Dussault, William Goblirsch, and Kory LaQuess Pullam all create personalities for these characters and the characters they play. Director Carin Bratlie keeps the action moving along and the tension ever increasing.

Theatre Pro Rata's 1984 is thought-provoking, compelling, creepy, disturbing, and a little too real. Check it out at Intermedia Arts in Uptown through next weekend.