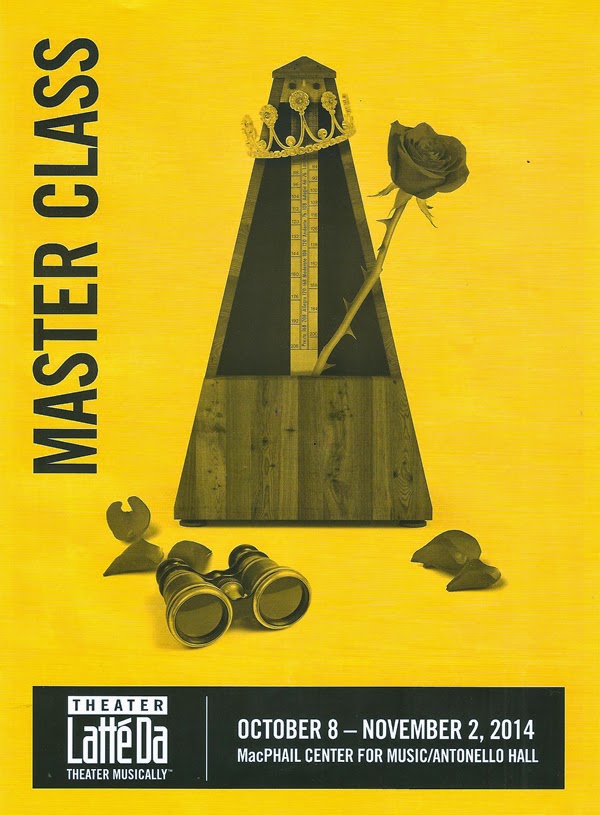 I don't know opera, and I don't believe I had ever heard the name Maria Callas before seeing Theater Latte Da's Master Class. But I have been educated. I now know that Maria Callas was one of the most talented, dedicated, and fascinating artists of the 20th century. Her paintbrush was her voice, her canvas was the stage, her creation was opera. She sacrificed everything for her art, and had very strong opinions about what art is and what it isn't. She shared those opinions in a series of master classes at Julliard in the early '70s. Playwright Terrence McNally used those classes as the backdrop against which to tell the story of who this woman was in his 1996 Tony-winning play. Her attitude towards art may not lead to the healthiest and happiest of lifestyles, but it does in some cases lead to some exquisite art, both in her singing, and in this magnificent production by Theater Latte Da.

The brilliance of this play is that it's constructed as a music school lecture, with Maria Callas as the instructor and we, the theater audience, as her audience. This allows her to speak directly to us, which is a bit terrifying as she's not an easy teacher, but also extremely engaging as it immediately draws us into the world of the play. Maria takes the stage and begins imparting to us her wealth of knowledge about opera and show business in general, gained from thirty years of performing at the best opera houses in the world. One by one she calls three students in to instruct them as we watch, teaching them that it's about more than just the singing, you have to feel every emotion. Through her direct instruction to the audience, her harsh critiques of her students (that is really more about her than them), and through flashbacks or memories of certain trying times in her life (including her relationship with Aristotle Onassis), we get a clear picture of who this woman was, and it's quite fascinating. She was the type of person for whom the word diva was invented, but it was all at the service of her art.

I'm feel like I'm running out of words to describe Sally Wingert's performances. She recently won an Ivey for not one but four brilliant performances over the last year, all of which I saw and loved. And yet she continues to amaze me each time I see her. How does she do it? She has created so many very different, complex, fascinating, layered, real women. Sally absolutely commands the stage as Maria Callas; she's strong, opinionated, funny, vulnerable, and so present. When you watch Sally you don't feel like you're watching a performance, you feel like you're watching a person. Maria would approve of Sally, she doesn't "act," she "feels," she "is." I felt like I was attending a very important lecture about art and life, and I should be taking notes. I'm not sure who was giving the lecture, Maria Callas, or Sally Wingert, or director Peter Rothstein, who does another beautiful job with this production. Likely it's some delicious combination of all three.

As commanding as Sally is, she's not the only one on stage. With her the whole time is music director Andrew Bourgoin as accompanist Manny. I was lucky enough to be sitting near the front on the piano side of the stage, where I could watch his hands bouncing off the keys or softly caressing them. As Manny, he also provides a nice foil for Maria, mostly listening quietly and occasionally interrupting reluctantly to keep things on track. Kira Lace Hawkins, in Jan Brady hair, has a nice turn as student Sophie, with a voice as rich, smooth, and delicious as melted chocolate. Opera singers Benjamin Dutcher and Kelsey Stark O'Emilio also lend their gorgeous voices to the roles of eager students Anthony and Sharon.

Theater Latte Da could not have picked a better location for this play. Antonello Hall at the MacPhail Center for Music is a gorgeous, high-ceiling, pristine, sparsely furnished room that was built for sound. One of my favorite things that Maria says is "I don't believe in microphones, people have forgotten how to listen, if you can't hear me it's your fault." No amplification is necessary in this space with these trained artists, and the sound is exquisite. I also appreciated the costumes (by Willene Mangham). They definitely have a '70s vibe, but it's subtle and doesn't overpower the simple directness of the story.

I'll leave you with a quote from Maria Callas: "The only thanks I ask is that you sing properly and honestly." A great motto for not just art, but life.