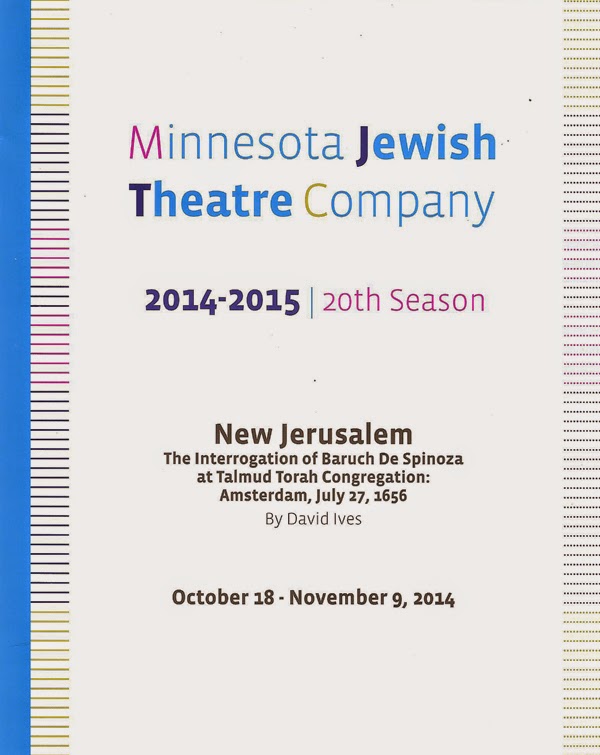 Minnesota Jewish Theatre Company has introduced me to a fascinating man in New Jerusalem. I'd never heard of 17th century Portuguese-Dutch-Jewish philosopher Baruch De Spinoza before, but his thoughts on God, Nature, religion, science, and society, as expressed through one historical incident in his life, feel so familiar it's as if I did already know him. This play by David Ives focuses on Spinoza's expulsion from the Jewish community, called cherem, in 1656. The interrogation plays out before the audience, who plays the part of the congregation. Spinoza tries to explain his beliefs to his friends, family, and rabbi, but is unsuccessful in convincing them he is not a heretic. It's a dense play, with much to digest and contemplate, brought to vivid life by the cast.

The mid-17th century was a time of persecution of Jews (not unlike most times in European history). Amsterdam was relevantly tolerant, but as is stated in the play, there are limits to this tolerance. Meaning no public worship and no talking about religious matters with Christians, sort of a "don't ask, don't tell" policy. Which is a problem for Spinoza, because there's nothing he likes better than discussing religion, God, nature, science, and philosophy with anyone who will listen, including his friend Simon and the (Christian) woman he loves, Clara. This lands him in hot water with the city as well as Rabbi Mortera, his beloved teacher and father figure. He is called to the synagogue to answer for his crimes, where he is interrogated by Jewish and Christian officials, and his opinionated sister. The house lights come up, as we the audience are meant to play the role of the congregation, listening to Spinoza's arguments and eventually passing judgement on him. As history tells us, he is expelled, and that's where the play leaves us. But I wasn't quite able to let him go, so I went to Wikipedia to find out the rest of the story. He continued to philosophize for another 20 years but never joined another religion, becoming "the first secular Jew of modern Europe."

Spinoza was an early advocate of the separation of church and state, the idea upon which this country was founded (although some people like to forget that if it suits their particular religion or belief). In the play, he is quoted as saying, "a state without religion is the only state in which religion can flourish." He also speaks of the unity of God, nature, and all things, "nothing is not God," which sounds like a Unitarian to me (no wonder I found myself agreeing with much of what he says). He often talks of the French philosopher and mathematician Descartes and the interrelatedness of science and religion, which seems to coincide with my personal belief that science and religion are flip sides of the same coin, and the laws of science and math can help inform and explain our understanding of the spiritual world. Or as Galileo said, much more elegantly that me, "mathematics is the language with which God has written the universe." Sorry for the digression, but this is the kind of thinking and discussion and philosophizing that this play engenders.

Under able the direction of Kurt Schweickhardt, the cast does a great job with this heavy material, injecting life and humor into it. Michael Torsch plays Spinoza as a wide-eyed idealist and a dreamer, and makes Spinoza's words and ideas make sense in an appealing way. As his friends, Briana Patnode and Alex Brightwell showcase the human side of Spinoza. Rachel Weber is a spitfire as his sister Rebekah, barging into the proceedings and letting her opinion be known. James Ramlet and Skyler Nowinski play Spinoza's interrogators, at times frustrated, angered, bewildered, and silenced by his answers to their questions. Last but not least, George Muellner gives a sympathetic performance as the rabbi torn between this young man he thinks of as a son and his lifelong beliefs.

New Jerusalem continues through November 9 at St. Paul's Hillcrest Center Theater (construction appears to be nearly complete and the parking lot on Ford is open again). I highly recommend it if you enjoy thought-provoking discussions about God, Nature, science, religion, philosophy, and everything in between. I will warn you that it's long, nearly three hours, so take a nap or have some coffee before the show, especially if you go to an 8 pm performance. As fascinating as it is, it's a challenge to stay engaged in a philosophical discussion for that long, but it's well worth the effort.