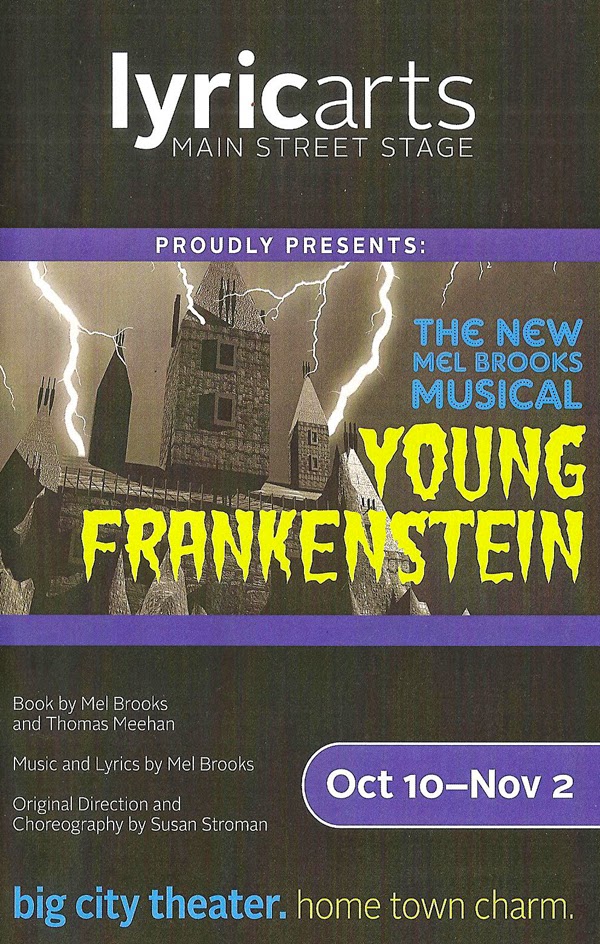 I've never seen Mel Brooks' classic comedy horror spoof Young Frankenstein, which he adapted into a Broadway musical in 2007. But I am a fan of his other movie-to-musical (-to-movie), the much more successful The Producers, which won a record twelve Tonys. So I went to Lyric Arts' invited preview of Young Frankenstein with no knowledge or expectations, which doesn't happen often and is sometimes a fun way to see a show. What I discovered was a super-fun, crazy, campy, over-the-top comedy with fun and clever songs, well performed by an enthusiastic and totally committed cast, with elaborate set and costume design. This is an ambitious show and Lyric Arts' largest production to date, in terms of cast, sets, and costumes, and they manage to not only pull it off but create something hugely entertaining.

The title refers to the grandson of the infamous Dr. Frankenstein, who brought a dead man back to life and created a monster. A well-respected doctor in New York who denies any connection to his grandfather, Young Frankenstein travels to Transylvania upon the death of his grandfather. There he finds it a little harder to ignore his heritage, and with the assistance of his buxom assistant Inga, helpful hunchback Igor, and grandpa's stern girlfriend Frau Blücher, he continues his grandfather's work. All of this is mostly an excuse for whole lot of silliness, but it works.

The show is really well cast; everyone from the leads to the ensemble are fully committed to the camp of the piece, as directed by Matt McNabb. And that's absolutely necessary for successful camp, you can't do it halfway, wide eyes and exaggerated gestures are required, and the cast delivers. As the young Dr. Frankenstein, Kyler Chase is the straight man surrounded by crazy characters, and his reactions are priceless. Katharine Strom appears to be new to the Twin Cities theater scene and I look forward to seeing more of her because she absolutely nails the role of Frankenstein's fiance Elizabeth, playing up the camp to the hilt and flirting with the audience. She's got that rare talent of singing well comedically, the gold standard of which is Sara Ramirez in Spamalot. No one has every come close to matching her genius, but Katharine is well on her way. Nykeigh Larson is a hoot as Inga, and performs quite a feat singing the yodeling song "Roll in the Hay" while bouncing around on a hay wagon and never missing a note. Brendan Veerman is hilarious as the helpful, limping, English-accented Igor with a mysteriously moving hump, as is Kate Beahen, another master of the reaction shot as the stern and stoic Frau Blücher, hiding a great deal of passion for her departed boyfriend and loyalty to his work. Last but not least, Tom Goerger makes a menacing monster, who transforms into a fine friend and tap-dancer.

The look of this creepy Transylvanian castle is created by set designer Brian J Proball and costume designer Samantha Fromm Haddow, with over 100 costumes for the 18 actors, from lab coats to evening gowns to village attire to monsters. There are huge moving set pieces, including the aforementioned hay wagon with some kind of gyrating mechanism, and a contraption that lowers from the ceiling to connect to a table with strange moving gears and lift it in the air (it's a bit noisy and moves slowly, something they make fun of). There are a lot of moving parts and pieces and it all happens fairly smoothly, and I expect it will only get better with practice. The ensemble dance numbers, including "Transylvania Mania" and the tapping number "Puttin' on the Ritz," are highlights of the show (choreography by Ann Marie Omeish).

Young Frankenstein is a silly and ridiculous musical comedy from Mel Brooks, with a similar tone to The Producers and Monty Python's Spamalot. Lyric Arts does a great job with this big show, so check it out if that's your thing (playing now through November 2).