"A Steady Rain" by Odyssey Theatre Ensemble at the Guthrie Theater 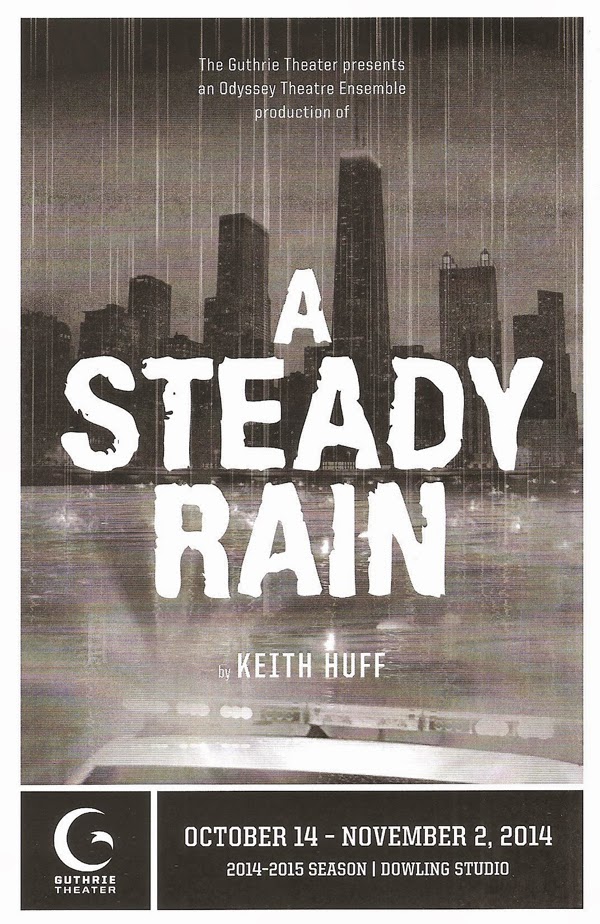 The Guthrie is currently hosting L.A.'s Odyssey Theatre Ensemble in the Dowling Studio Theater for their production of A Steady Rain. It's an engrossing 90 minutes of theater in which two buddy cops tell their story, at times directly to the audience, or in conversation with each other. The stories they tell are harrowing, and sadly not all that different from what you hear on the news: cops shooting an unarmed teenager, taking bribes, planting evidence, leaving a boy to die at the hands of a serial killer. This is a heavy play, relentless and brutal, but well written and acted and extremely relevant.

The action takes place on a stage that's completely bare except for two wooden office chairs on wheels, like you see in TV police offices, and three screens projecting abstract and fuzzy images to set the scene. Although perhaps "action" is the wrong word. There's really not much action; it's two guys talking. Writer Keith Huff calls it a duologue, in which the two characters give alternating and interrelated monologues, sometimes talking to each other, sometimes talking about each other to the audience. I found it to be a unique and interesting means of storytelling.

Joey (Thomas Vincent Kelly) and Denny (Sal Viscuso) have been best friends since they were kids growing up in Chicago, and are now partners in the Chicago PD, frustrated in their hope to make detective. Denny is a classic bully, repeatedly beating on and belittling Joey, and pretty much everyone else, but somehow they remain friends. Denny has it all - a beautiful wife, two kids, and a home with several TVs. He's even been selected as a Nielson family! But of course it's not as perfect as it appears; Denny cheats on his wife and lies to her about where he's getting the extra money from bribes. Joey is a recovering alcoholic who's become like a member of Denny's family, until after a tragedy Denny's wife comes to rely on him a little too much, which is understandable because Joey is sensible and stable while Denny is a hothead. A series of incidents land the partners on suspension with their relationship strained. Will they stick together to weather the crisis, or turn on each other? 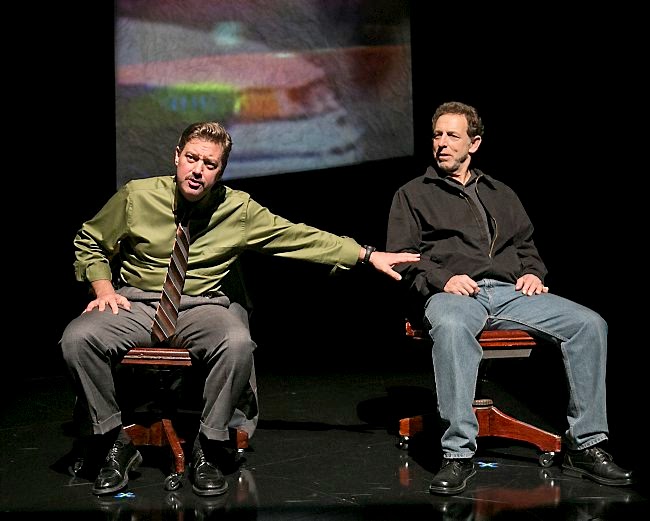 Since the playwright is a TV writer, and director Jeff Perry and both actors are all veteran TV actors in that I-know-I've-seen-them-in-something kind of way, I'll mention two TV shows that this play brings to mind. The first is HBO's True Detective, in the sense that these guys are partners and best friends who love each other, but you get the sense that they hate and envy each other at times. One is married with children, a seemingly happy family, and the other is a bachelor living in a poorly furnished apartment. The cases that they work on tie them together inextricably, for better or worse. The other TV show brought to mind is the new Showtime series The Affair, in which two people remember the same events but in slightly but significantly different ways. There's a little of that here, as Joey and Denny sometimes tell slightly different versions of the same events. A Steady Rain feels a little bit like an episode of a TV cop drama, but a really good one.

The Guthrie's black box studio theater is an intimate place to see theater, which in this case means there's no where to hide from the violence and ugliness of the story, as well as the deep emotion felt by the characters, fully and painfully brought to life by the actors. In some of the more tense scenes, the audience was so quiet you could hear a pin drop. It's not an easy play to watch, but it's compelling and well-done (playing now through November 2).