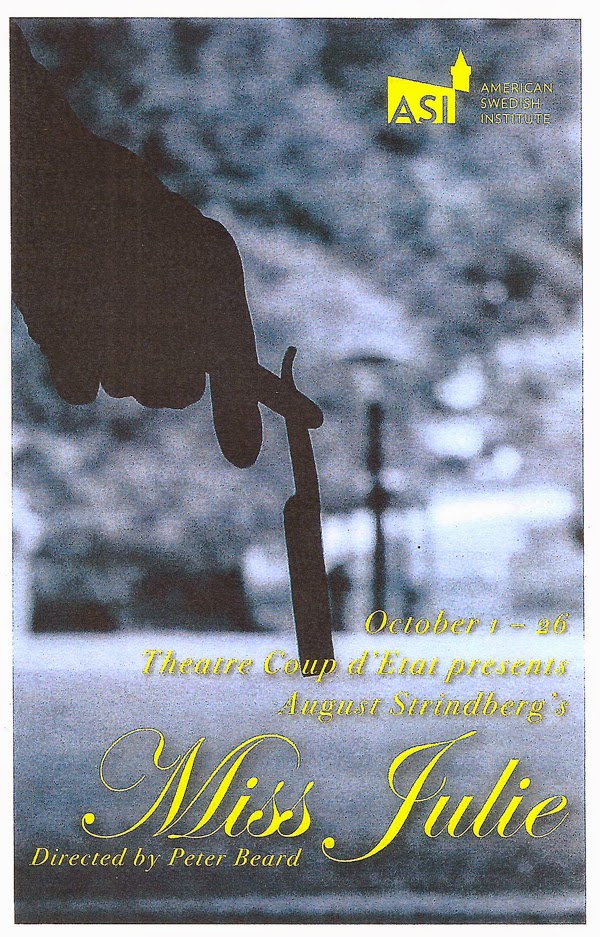 In a perfect marriage of play and location, Theatre Coup D'Etat is presenting Swedish playwright August Strindberg's play Miss Julie on the third floor of the gorgeous Turnblad mansion at the American Swedish Institute, in conjunction with their Strindberg exhibit. This intense three-person drama that examines issues of class, gender, love, and power in late 19th century Sweden plays out perfectly in the grand room. Photos of Strindberg's sets are on display, and there's even a quote from Miss Julie on the wall: "no matter how far we travel, the memories will follow in the baggage car." This may sound like a sweet and sentimental quote, but this is not a sweet and sentimental play. In context, the quote is more about these characters being unable to leave their past behind them, so trapped are they in the roles they were born into, no matter how hard they struggle to climb out of them.

The play takes place in the kitchen of a Swedish estate in the 1890's on a midsummer's eve. There is a party going on upstairs in which Miss Julie, daughter of the count, dances with the servants. She's particularly fond of Jean, the count's valet, and follows him to the kitchen, much to the annoyance of Christine, the cook and Jean's fiance. Here the power struggle between Jean and Julie begins, as Christine looks on helplessly. At first Julie has the upper hand and commands Jean to do her will, testing him to see how far he'll go. Later, after intermission during which Julie and Jean have gone to his room, and all that that implies, he has the upper hand and is unspeakably cruel to her. She bows to his will, but then remembers who she is and takes back control. It's a constant power struggle with each of them having the upper hand at different times, but in the tragic ending, there is no winner. Gender roles, sexual politics, and most of all the class structure that defines their lives all play a part in this intense and brutal drama.

The three-person cast lays their emotions bare in this intimate space, under the direction of Peter Beard. As the title character, Kelly Nelson portrays Julie's haughty confident demeanor hiding a lost and damaged young woman, desperate to find her way out. James Napoleon Stone's Jean is at times courteous and polite, sweet and loving, and cruelly opportunistic. Completing the trio is Brie Roland, who brings a grounded and sympathetic humanity to the role of Christine, who wants to return to her simple and straight-forward life before the events of this evening. The characters are quietly established in the first act, but things really heat up in the second act, as desperate emotions reach the boiling point.

Miss Julie continues in the Turnblad Mansion through October 26. It's a wonderful example of the site-specific theater that seems to be happening more and more often (see also Gremlin's production of After Miss Julie in the James J. Hill House a few years ago). The authentic setting aids greatly in suspension of disbelief, and the small cast in close quarters with the few dozen audience members makes you feel like you're eavesdropping on a real conversation. If you're able, take the stairs instead of the elevator to the third floor and peek into the dark and mysterious rooms of the mansion on your way up and down, and imagine the real dramas that occurred in this beautiful house and others like it a hundred and more years ago. (You can also, of course, tour the mansion during the daylight as part of the ASI museum.)