"Nice Work If You Can Get It" at the Ordway 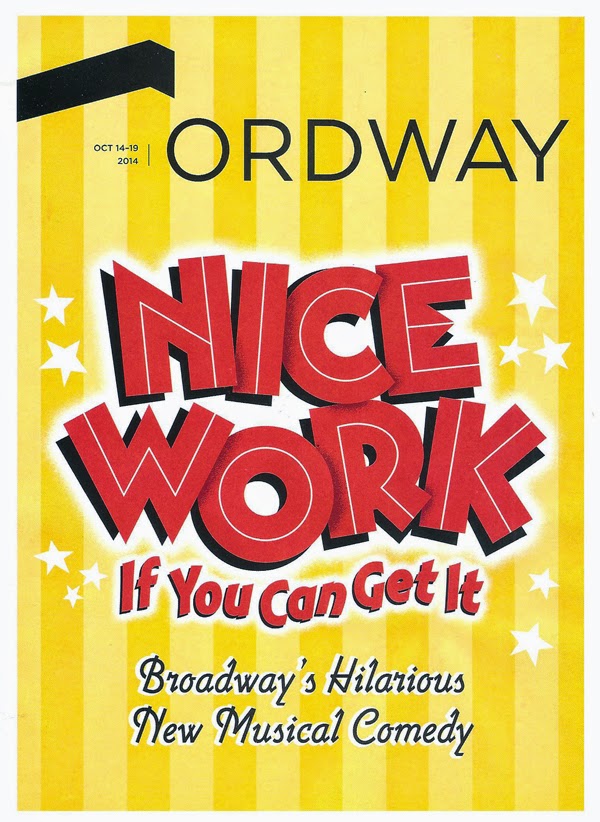 The first thing that comes to my mind when I hear this song is the theme song for the '90s TV sitcom Cybill. But it also makes me think of what I do here at Cherry and Spoon. It's not really work, because I don't get paid, but people give me free tickets to come see their shows. That's a pretty sweet gig. But of course, this well known Gershwin brothers song was not written for Cybill Shepherd or for me, but for the Fred Astaire movie A Damsel in Distress. It's also the title of the new jukebox musical Nice Work If You Can Get It, which features this and a dozen or so other songs by one of America's best songwriting teams, George and Ira Gershwin. George (the composer) and Ira (the lyricist) both collaborated with other people, but this musical focuses on the songs they wrote together (I learned about George from the Ordway's Broadway Sonbgook, and Ira from a play at Park Square). And like the title says, it's a nice show. There's not a whole lot of substance, but the songs are undeniably great, and they're well performed by the cast and full orchestra. Add in some fantastic dance numbers, gorgeous sets and costumes, a very loose plot to tie it all together, and you have a pleasant evening at the theater.

A jukebox musicals is a musical with no original music written for the show, but rather the creators incorporate music from a musical artist (like Abba in Mamma Mia) or theme ('80s rock songs in Rock of Ages). Like most jukebox musicals in which a story is conjured up to fit the already written songs, the plot of Nice Work If You Can Get It is pretty silly, and really just an excuse to get the songs in. But it's entertaining enough, sort of a combination of Anything Goes and Guys and Dolls. Famous (female) bootlegger Billie Bendix meets wealthy playboy Jimmy Winter in 1920s New York. When she hears that he has a large house on Long Island that no one ever uses, she decides to stash 400 bottles of hooch in the cellar. But the next day, Jimmy shows up with his new bride Eileen, "the finest interpreter of modern dance." They assume that Billie's partner-in-crime Cookie McGee is the butler, because he has dressed in the butler's clothes in case the police come by (OK, sure). The obligatory crazy hijinks ensue when Jimmy's girls, Eileen's senator/reverend/judge father, his temperance advocate sister, and the cops show up. And of course, admidst all this, Billie and Jimmy fall in love.

This production is luscious, from the big full orchestra, to the fantastic dance numbers by Kathleen Marshall, to the gorgeous 1920s period costumes (the shoes!), to the elaborate set of the mansion, with beds, baths, and tables rolling in and out as needed. And while the plot may not be stellar, the cast is. The leads all have fantastic voices and are quite entertaining as they ham it up. Reed Campbell as Cookie is the most guilty of ham, in the best possible way. He's an absolute scene stealer, so much fun to watch as he finagles his way around the mansion and the rich people. Our romantic couple both sing beautifully. Alex Enterline as Jimmy is a charmer, and Mariah MacFarlane as Billie has a sweetness to her voice that's juxtaposed nicely with Billie's tough exterior. Rachael Scarr is also great as Jimmy's new wife Eileen, who is so conceited that she sings a love song to herself.

Nice Work if You Can Get It continues at St. Paul's Ordway Center through this weekend only. If you enjoy the music of the Gershwin brothers, big dance numbers, and gorgeous sets and costumes, you might find this a pleasant evening at the theater (discount tickets available at Goldstar).